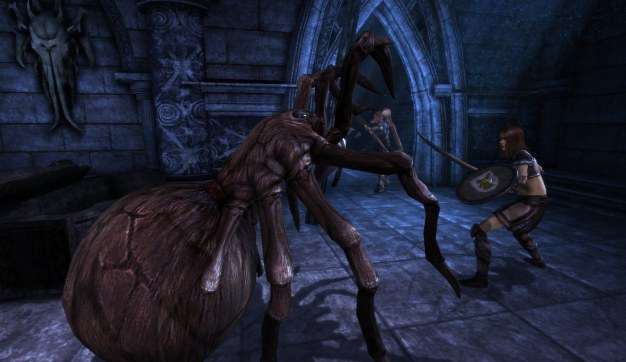 Spending 15 minutes with a BioWare RPG and then coming back and writing up a hands-on preview trying to get a grasp on the game is like studying quantum physics for a day and then thinking you can teach a class on it. There’s so much depth and width to BioWare’s RPGs that I’m pretty sure even if we had spent the entire NYCC playing Dragon Age: Origins, their first title under EA, it would still be impossible for us to truly get a grip on everything. So before we jump into this whole thing let’s just make it perfectly clear that we were told that this game is the biggest that BioWare has ever made and because of that our 15 minutes with the game gave us only the most cursory glance at the thing.

That being said it was great to be able to jump on a mouse and keyboard and start gaming again. Alienware had supplied EA with fancy computers to run Dragon Age on and it looked fantastic. The game is a fantasy RPG in which the player chooses and creates their own player and depending on who they choose and their actions it will change the game’s storyline. We weren’t privy to too much on what it was going to be about, but depending on the characters you choose and the party members you keep the story will go a plethora of different ways. This is probably best illustrated by the fact that one of the party members can be a dog. Now that I’ve really got your attention, let’s jump into the nitty gritty.

Dragon Age plays like a classic dungeon crawling RPG; point, click, attack, repeat. There’s even an option to get the top down view that gamers in this genre are used to. In this case though you are handling four characters instead of one. Players can select which character to attack with and the rest will run via the game’s AI. Of course players can choose to control all four party members at the same time and vary their actions depending on what they want done. For instance I, being totally unused to having so many options presented to me on the screen at once since I haven’t played a PC game in ages, accidentally locked all my computer controlled players in place during a fight. Thus I was mauled to near death until I got them all back to me. 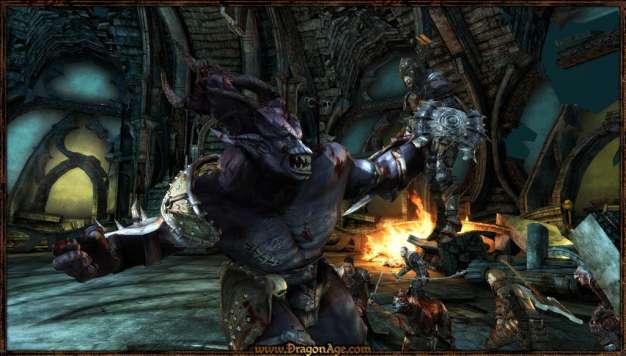 Luckily when a party member dies the game isn’t over. As long as the player has one party member still alive the game continues. When a room is cleared the rest of the party will come back to life and slowly regain a little health, but never back to full unless a potion or magic is used. Of course some strategy can be used in attacks and using magic. Archers for distance, mages for magic, warriors for brawling, etc. Depending on who you have in your party at any point in the game you’ll be more or less prepared for battle. The game will include a plethora of people who can join and leave your party and who is in your party will change how the story goes.

We got our hands-on a small portion of the game where we were tasked with fighting through a tower. Our characters were randomly generated (dog party member FTW!). The section we played took place in the opening part of the game which is the origin story for your character.This story sets up who your character is and how the entire game will unfold. Your actions here truly effect everything that occurs later. Sadly I didn’t get to see too much of this decision making except for a few speech branches, most of what I got to do involved bashing bad guys senseless, which isn’t all that bad really. In fact it’s even better when the game lets you use a little strategy. After entering a room full of enemies I had two options. The first was to attack them head-on, but the second was to pull a lever and release numerous hounds that were locked in cages in the room. Taking the latter option I freed about six hounds who instantly became part of my party until they died off. Of course I couldn’t control them, but any enemy I was against they would attack. 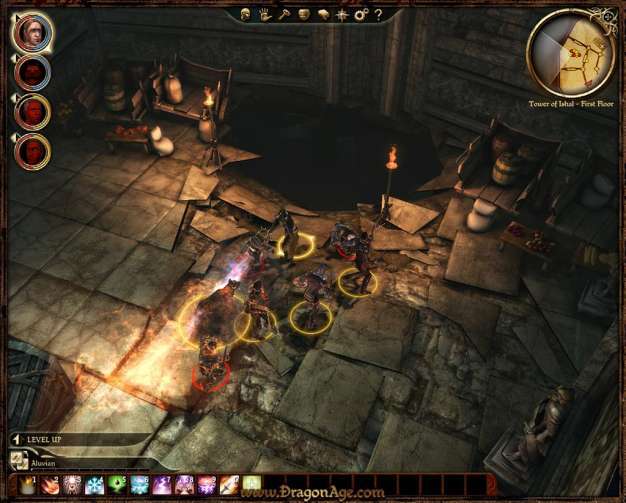 In order to do all this bashing each character in your party has special abilities which appear at the bottom of the screen when you have that character selected. My warrior had a few shield increasing ones and a powerful attack that made him slash the enemy harder a few times and deal more damage. Using these consumes your MP but can really be helpful. The whole thing controls with the mouse and the menu system was easy enough to get to as all my abilities were laid out on the bottom of the screen for easy access. This is good since the game’s length is between 50 and 100 hours and an annoying interface would absolutely ruin it.

Of course it’s possibly to absolutely ruin the game yourself. Well not actually the game, but players can pretty much alienate themselves completely. For the first time in a BioWare game the party itself will react to the actions you take. If you tell them to go slaughter a child they may leave you and if they do come it’s going to cause some strife amongst your group and that can lead to trouble. Not only will players have to be keeping a balance with how they relate to the world around them, but also to the very people in their group. Don’t disappoint the dog, his whimper is too much to take.

The real thing that stands out we were told about the game is that the story is truly going to be dark. Dragon Age is going to have a much more black and moody storyline than previous BioWare ventures. Yes, even darker than the sinister Sonic Chronicles. Really, it’s BioWare and it’s an RPG. If they can make Sonic work in that arena we have very little doubt that a game which they created from the ground up is going to be anything short of magnificent even if all we got was a glimpse of it. No pressure there guys.