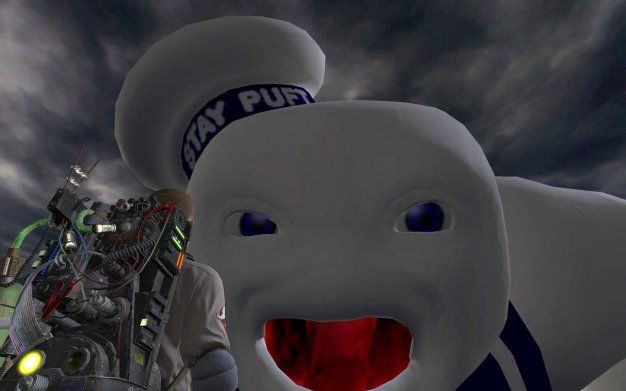 Yesterday, we got a chance to play Ghostbusters: The Video Game, arguably one of the exciting multiplatform games scheduled to come out in 2009. Yes, it’s funny. Yes, it looks great. And, yes, my life is fulfilled because I got to play it before you did.

As many of you already know, Ghostbusters is doubling as a videogame and the third movie in the series. The single-player game is about 12 hours long, but that doesn’t include over 2 hours of cinematics. The producers we spoke with really emphasized how the game is as much of an interactive movie as it is an action game.

Atari was not particularly forthcoming about the game’s plot. What we do know is that Ghostbusters takes place 2 years after the second movie. In it, you play as a new recruit who is brought on by Egon to test out his new experimental weapons. Spengler doesn’t want the real Ghostbusters doing the testing because it’s probably dangerous, and possibly fatal. We only were able to use the traditional power pack and the trap, but Atari promised there would plenty of variety in the game, and that the different weapons would change how you approach different scenarios.

The level we played was early in the game and involved taking on the Marshmallow Man and his minions. Some of the smaller enemies blew up when you took them out, and if you were close enough, we noticed our character would get showered in marshmallow, which would be followed by a smarmy quip. Clearly the developers had the spirit of the movies at heart. 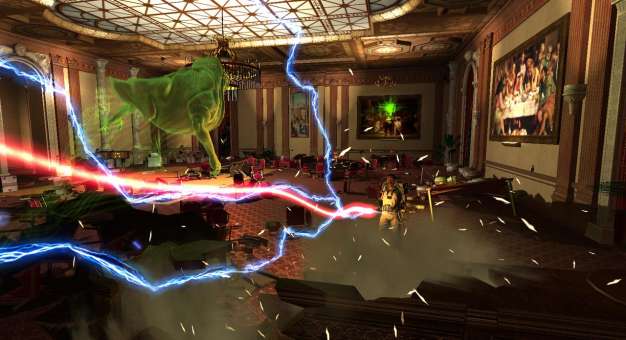 We also noticed that everything was destructible. When we missed a ghost with a shot from our power pack, it normally hit something, and that something blew up in a satisfying way. In fact, the developers flat out dare you to create absolute havoc by adding a running tab of your collateral damage that shows up every time you tear apart a bookcase or a famous work of art. In about five minutes, we wracked up over $10,000 of damage. Can anyone say “Achievements”?

During the game you’ll fight alongside different combinations of the original ‘busters. They’re generally helpful, but won’t run ahead of your or take any initiative. You will have to rely on them, however, if you’re overwhelmed by enemies. While your health magically regenerates, if you’re knocked down, you’ll need them to revive you.

Red Fly Studio developed the Wii title and leaned on Ghostbusters’ cartoony nature. The characters are less realistic, as are the powerpacks and environments. It feels more like a comic book than a movie, but that’s ok, because the Wii’s gameplay is more dynamic than its competitors’. A lot of time in the game will be spent “wrangling” ghosts, or using your power stream like a lasso in order to slam them into objects and wear them down enough to be trapped. Doing so, as I’m sure you can imagine, is a lot of fun. I don’t giggle while playing games very often, but the combination of throwing a ghost into a full bookcase, seeing the books go flying, and hearing Venkman make some aside had me laughing throughout what was actually a difficult level. 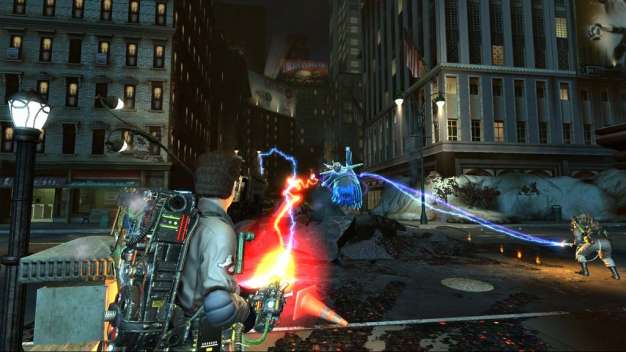 Terminal Reality’s 360/PS3 build uses the same core gameplay of weakening, wrangling, and trapping ghosts, but it adds striking graphics and incredible realism. There was a moment in the level where the the Marshmallow Man ripped into the building we were fighting through, tearing away a large section of the wall. The opening allowed us to see the immensely detailed background of the city. It would have looked cheap if the surrounding buildings had not been rendered as well or lit as realistically. We got the feeling that the Marshmallow Man was tearing through a real city, and it was our job to stop him.

The power pack was a creation all to itself, and it functions as more than mere costume. It blinks, it beeps, and it moves. If you overheat, the lower third of the pack lifts out and cools itself, putting you out the action for a while as it vents. Also, every meter or gauge you need is right there on the pack, showing you threat levels, your health, and how much power you’re using, allowing for the game to avoid using a HUD.

The game has actually been done for over a year, but Sony insisted on releasing the game with the 25th anniversary of the original movie, giving Terminal Reality a year to fix any bugs and tighten any screws. Thank God: the result is impressive. From what we saw, Ghostbusters looks cinematic, graphically impressive, humorous, and lots of fun. Assuming the plot is as good as we’re hoping, it should be a winner come summer.