When Rockstar’s friendly PR guy told me that in order to check out the latest Grand Theft Auto game I would need to follow him into the shady van you see above, you can bet I was a bit skeptical. However, in the end the chance to take the Nintendo DS’s first GTA game for a test drive outweighed the risk of being blindfolded and moved to an undisclosed location.

Turns out going into the van was a great idea. I learned a ton of neat stuff, including how to deal acid and turn a profit! However, I was most impressed by how Rockstar implemented the touch screen so that it added to gameplay but didn’t mess with the basic GTA formula. For example, you’ll use the stylus for very specific tasks like hotwiring a car or lobbing a grenade or putting together a sniper rifle. The core gameplay is still handled with the d-pad and buttons so it doesn’t feel too different from the PlayStation builds.

Of course, Chinatown Wars looks a lot different than its more recent predecessors. The action is shot overhead like the old school GTAs, but unlike those games, the camera rotates 360 degrees and everything from pedestrians to safe houses is modeled in 3D. This style may not provide the best level of detail, but it sure looks great for a DS game. Cut scenes were smartly handled with comic book-style slides which had text that would make my mother blush. Such language felt plain wrong coming out of the machine that I usually use for Animal Crossing and Pokemon. Sweet.

Before I was allowed to handle the game for myself, Rockstar made sure I knew all about the in-depth drug dealing system of Chinatown Wars. What started out as a simple mission to move some acid turned out to be a whole economy system with six different drug markets, a load of gangs fighting for every last dollar, and a great supply and demand system involving the strategic destruction of cameras. When selling, you’ll do better off around cameras, because they scare away your competition and you can sell for a higher price. When buying, the tables are turned and you’ll want to go to destroy a camera or two in order to lower the price. So deciding which cameras to off has an impact on the area’s drug economy. Very cool. At the end of the demo I felt I could do this for real — that is until the cops showed up (in the game) and it was necessary to jack a car a make a quick getaway. I have a much higher respect for drug peddlers now. 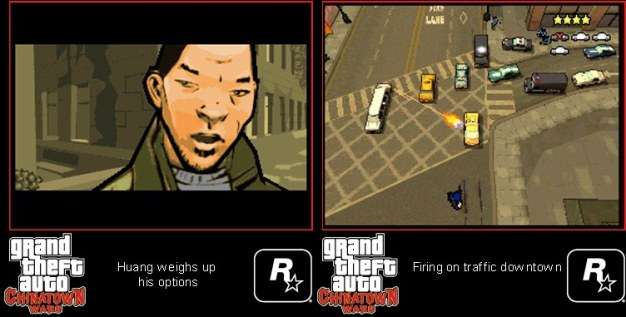 Speaking of getting away from the cops, the star system in Chinatown Wars works a little differently from past games. Instead of just avoiding the fuzz to get out of a jam, you’ll have to engage the 5-0 in vehicular combat in order to physically disable them from pursuing you. When the going gets tough, I found you can either take the offensive by trying to bump the police cars into obstacles or just hope they wipe out when pursuing you around tight corners.

Driving, of course, is a key component to a game based around stealing cars. Fortunately, the driving handles nicely with just the d-pad and the A and B buttons. Although it’s not clear to what extent, there are a variety of different vehicles that all handle a little differently. I had some experience on both extremes, getting behind the wheel of a hefty limousine as well as an agile sports car. Although I wasn’t good enough with the controls yet, it is possible to perform donuts and other fun maneuvers in Chinatown Wars. Rockstar definitely didn’t cut any corners when it came to driving mechanics.

After showing off the features I just explained, the PR guy finally handed over the reigns to me. It was time to kick some serious butt. My first mission (there are A LOT of missions) was to drive around with my chain gun toting buddy in the back seat, taking out a set number of rival gang members in an unfriendly neighboorhood. There were a lot for me to kill, so this mission allowed me to get a lot of rage out of my system as well as check out some of the combat animations. For a game that doesn’t give much detail to character sprites outside of cutscenes, Chinatown Wars has pretty impressive death animations. While some dudes I ran over fell flat on their backs in a pool of their own blood, others were violently torn apart like rag dolls. This felt strangely satisfying. 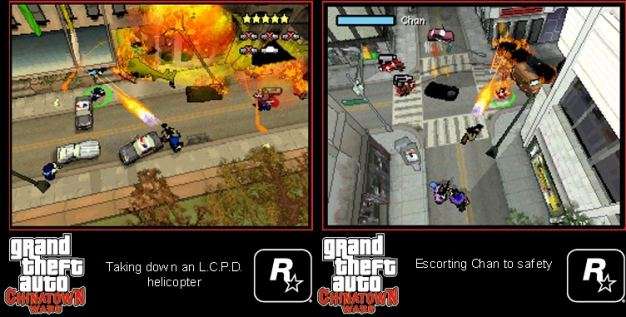 The next mission was a little more professional in nature. Someone had ratted someone out, and I had to shoot the rat with a sniper rifle. I started by taking a limo to a hotel, then went out on the roof, where a suitcase was waiting for me. What could possibly be inside? A sniper rifle! For me? No, you shouldn’t have! Turns out assembly is required. I used the stylus to drag each component into place and then snapped and twisted the pieces together. Just like in the movies! I was seriously geeking out over this. Anyway, once I nailed the target, it was time to make a hasty escape. The fuzz were after me, so I got to try my hand at car-to-car combat. The cops of Chinatown Wars are very persistent. They kept coming back for more punishment every time I bashed one into a wall. I had knocked off a couple cars when my own vehicle took one too many bumps and began to combust. I jumped out just in time, but now I was surrounded. After torching a few officers with my flamethrower (yeah, I was amazed I had one as well), I finally succumbed to the bullets. Wasted!

As I stepped out of the van and saw daylight again, I found myself impressed with Grand Theft Auto: Chinatown Wars. It’s clear that Rockstar put a lot of effort into making the newest GTA title just as fun as its successful console cousins. My most lasting impression will be of the apparent depth of the game. Chinatown Wars presents a huge city with way more stuff to do than I could ask for. The March 17 release date is highly anticipated.