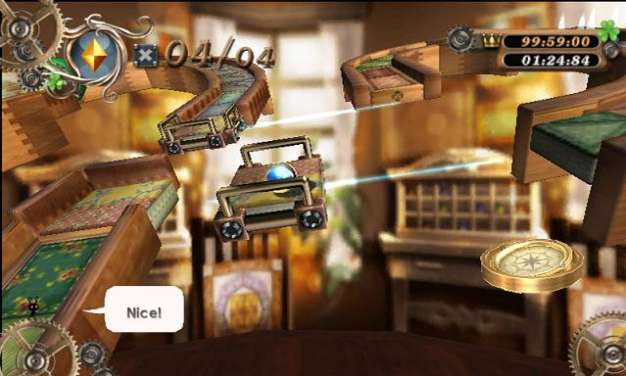 The little console that could is now the little console that is kicking ass and taking names. The facts are there despite what haters say. We’d like to believe that this is largely to do with the fact that Nintendo’s revolutionary controls have passed the “gimmick” stage. Sure there are plenty of shovelware titles to sift through, but games are finally finding that balance of button and motion controls like MadWorld. Still there are some games that seem impossible to play with any satisfaction on any other console.

Exhibit A: Marble Saga: Kororinpa, Wii control perfection realized. Granted, Marble Saga isn’t the first marble game to roll onto the Wii or even the first Kororinpa for that matter, but it certainly plays like the best. Players can hold the Wiimote flat in their palm facing the screen and tilt the stages, but we preferred holding it sideways and tilting it that way for a more classic Labyrinth feel — the game, not the David Bowie thing. The stage tilts easily and responds quickly, but since different marbles have different attributes like weight and bounce players have to be careful how far they tilt.

After being impressed with the ease of play with the Wiimote we tried out the Balance Board play. Guess what? Gamers will look just as ridiculous playing Marble Saga as they did playing the Marble Balance Challenge in Wii Fit, only here the controls were a bit less touchy and didn’t constantly throw marbles over the edge. Leaning forward was awkward and some players may be tempted to put their hands out to their entertainment centers for fear of falling (guilty as charged), but it is quickly mastered.

Knowing that the controls were spot on we were able to focus on the build of the game and stages. There are over 150 stages spanning 7 areas filled with 40 different widgets like magnets, cannon vaults, shrinking machines, acceleration tubes, movable bridges and more. Each of these worked well on the board with pinball bumpers trying to throw us off stages and bridges that needed to be hit with enough force to tip over and into place. Also, sprinkled throughout the stages are items and gadgets to be picked up, which will help Anthony the Ant reach the Golden Sunflower and save his colony.

Players will start off with just a few stages, a few marbles and quickly build from there. Marbles are customizable in a variety of areas like what sound effects players want. However, only the ultimate Miible (Mii marble — yeah, just made that one up on the spot) is fully customizable in how it handles. Don’t expect the Miible to come cheap though; Amar Gavhane, Associate Brand Manager at Hudson, confirms that players will have to work for it.

Marble Saga includes a full level editor, the same editor that the game designers used for each stage of the game. Stages can be sent to friends via Wii Connect 24, but cannot be saved onto SD cards or Wii Remotes; so share and share alike. Hudson will also be sending out extra free stages through the Wi-Fi Connection after the game hits retail this spring.