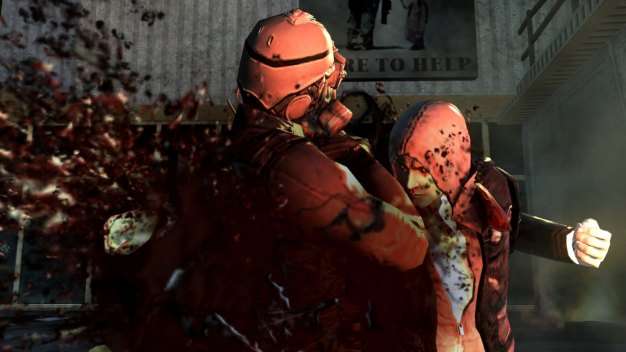 Tearing across New York as an overpowered superhero whilst destroying property and beating up on people isn’t that new. We’ve been doing it since the groundbreaking Spider-Man 2 came out. Yet there is something about Prototype that has gotten almost everyone excited about the game, which we’ve only really seen a few screens and trailers for.

So is it the clearly adult nature of the game that make it stand out from the open-world superhero crowd? Or maybe it’s the fact that Radical Entertainment has been developing it for forever that makes people desperately want to get their hands on this game. Possibly it’s just the chance to finally be able to play as a character who has every power we could possibly want. Or maybe it’s just the fact that you can jump off a building and deliver a devastating elbow drop onto a tank, raining down death and destruction like some kind of god-like professional wrestler.

At a pre-NYCC party Activision had last night I got a chance to go hands-on with a demo build of the game to find out just what makes it tick. But to answer everyone’s dying question quickly: yes, bringing the elbow down on top of a tank is frickin’ sweet.

The demo Radical brought to the party was set-up to show off the game’s slickest parts and give us full access to all of Alex’s, the game’s protagonist, powers. In the demo we were forced to use one power per-mission unlike in the actual game where players will be able to switch through the strange powers that Alex has at will. The first level started out with Alex standing up in front of Grand Central Park. It was a little unclear as to why he was there, but that’s probably par for the course since the game revolves around Alex discovering why he has these powers and just what the hell is going on in New York as the city is being taken over by what appears to be a virus that mutates people into monsters. Plus, the army seems to be after him.

Thus the first objective is to kill a group of soldiers that is attacking you. For this one we had to use our bare hands. Of course Alex’s bare hands are nothing to scoff at as he can punch clear through a man’s skull. All of Alex’s powers work under the same control dynamic: attack, strong attack, jump and grab. Player’s can charge up their strong attacks to perform even stronger attacks. Jump attacks are also available and Alex can kind of fly and can easily run up walls. In fact if you hold down run, Alex will basically vault, jump or run over whatever is in front of him, which, in a game where literally hundreds of objects and people are being thrown around constantly in your path, is very useful.

Player’s can also grab any person they see and then tap their strong attack button in order to absorb that person. Absorbing a person or monster grants you life and some experience points (or evolution points as the game calls them), but that isn’t the real reason you do it. The real reason is that Alex absorbs people by completely and totally ripping them to shreds. For instance, in the first part of the demo where Alex was only using his bare hands I grabbed a soldier after beating him up enough to absorb him and proceeded to tap Y to absorb the guy. Alex, in a quick, highly cinematic move, proceeded to shove his fist through the man’s head as the black tendrils that encase him sucked the poor soldier into his body. This was one of the less gory absorption kills. 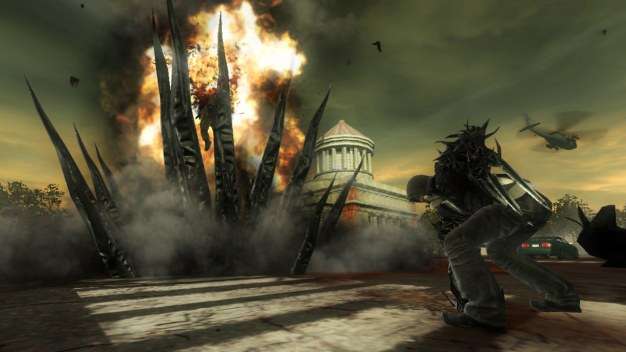 After I had taken care of the soldiers with my bare hands the demo let me use Alex’s claw powers to take out another plethora of bad guys. Alex’s claws let you move faster and pull off lengthy combos, not to mention dice people up into tiny bits. Obviously, they aren’t the strongest weapon in the game, but very quick. Each different power has a different strong attack too. For instance with the claws, Alex will slam his hand into the ground and spikes will slam up underneath the enemy he’s fighting (see above image). After dispatching a few more soldiers and infected New York citizens the tanks started rolling in and Alex busted out his giant fist power.

Here the corruption, or whatever you want to call it, encases Alex’s fists and he becomes slower, but far more powerful. This is also the mode where you can drop those elbows on anything moving. I, of course, quickly ran up the side of a building, turned around, looked down to find a tank, jumped off the edge and promptly brought the pain down on it like Hulk Hogan. The game has a pretty clever lock-on system that auto-targets and it worked really well. Players can also lock on to targets themselves if they feel so inclined. After shoving my elbow into a tank I decided to board the sucker. Alex can learn to drive tanks, helicopters and other vehicles by absorbing people who know such skills. The devs had the ability unlocked for us.

Not that the man isn’t a tank in and of himself, especially when they let you run around with a rocket launcher. I got a chance to try this when I morphed into the final power we got to see which was Alex with a giant blade on one arm (think Nightmare from SoulCalibur, but attached to him). This thing was cutting through people like butter, luckily the mission was to kill some tougher bad guys than just regular people, so fighting took a bit more skill. Absorbing folks with this blade was just nasty, and awesome. 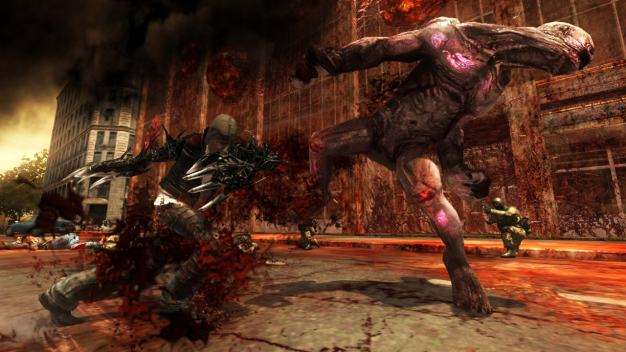 Clearly the gameplay has a lot of promise, but what really impressed me with my brief time with the game was the attention to detail. For a giant open world game, everything was really detailed. Alex’s collision detection was incredible and even just random people in the street looked great as I pummeled them to death. It also helps that the game runs without any dip in frame rate (or at least this demo did). At one point there were three tanks, two helicopters, four big monsters and at least 50 people running around Time Square when I was playing and the game didn’t even blink at it. It isn’t like all these things weren’t doing anything either; they, and I for that matter, were tearing the city a part. Who knows if the full build of the game will run as smooth, but color me impressed on that front.

Prototype really does seem to be shaping up nicely. I really hadn’t felt a sort of rush of excitement and freshness about a game like this since I picked up Spider-Man 2. If the full game plays as impressively as the demo we’ll all be having a very awesome June.