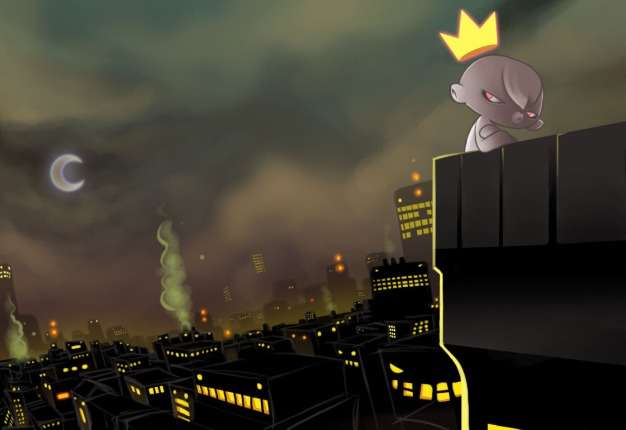 In case you weren’t around last year, we kind of fell in love with SouthPeak’s puzzle game Roogoo. Fine, we didn’t just fall in love with the game, we started stalking it and wouldn’t leave it alone until it finally came out on XBLA. Still that wasn’t enough for our shape matching and stacking cravings, we had to have more and we wanted it everywhere we went. Thankfully SouthPeak soon announced that Roogoo Attack would be heading to the DS and Roogoo Twisted Towers to the Wii, and there was much rejoicing (Yeaaa!!!).

Since the fundamentals of Roogoo are so basic — fit falling shapes into their corresponding shapes on platforms in order to stack up enough to move down to the next platform and eventually clear enough shapes to get through the level — we weren’t too worried about the game’s transition onto the two new consoles. So when we got some hands-on time with both games at the NYCC this year we were far more interested in what was new rather than if the game’s mechanics transferred over well.

For those uninitiated into the wonderful world of Roogoo, players control circular platforms that have different shapes in them. Platforms can be rotated left and right in order to catch falling shapes in the correct spot. Each platform has a required amount of shapes that must be stacked in order for blocks to fall down to the next platform. It appears insanely simple, especially thanks to the childish look the game has, but is one of the most addicting puzzle games I’ve ever played and can get insanely challenging as the levels progress. If you really want a basic run down of the original game check out last year’s write up which will give you all the basics. We’re just going to jump in to the new games assuming you know the rest.

Attack is pretty close to the XBLA original except far more portable and a bit bigger as far as the amount and style of levels go. The standard levels are all there and players either use the left and right triggers to rotate their platforms or the d-pad. Pressing A speeds up the blocks as they fall in case players need to avoid an obstacle or just want to go a bit faster. Aside from the traditional falling block gameplay, Roogoo on the DS has two other modes of play. One is more of a stacking game, where players are tasked with stacking different things in the right order in order to progress through the traditional rotating platforms. For instance one of the stacking levels has you stacking chickens and eggs. The nest has to be placed first, the egg second and the bird third. If you stack out of order or don’t get your bases rotated quick enough you lose your chicken. It seemed like a fun twist on the gameplay.

The second new mode is a skydiving mode in which players control one of the Roogoo as he skydives. He can only move in a circle however and must dodge enemies as he falls by rotating around. Players can also shoot enemies in front of them in order to rack up more points. This mode is more of a bonus round than anything else, but does offer some more variety.

The DS version also offers four player competitive play off of one card. The hope being that people share the game’s experience and those who don’t own the game instantly want it and go out and buy it. Multiplayer plays much the same way as single player does except now player’s can pick up blue stars that give them weapons, much like Mario Kart. There are anvils which make pieces fall faster, landmines which will hit your falling pieces and even a weapon that changes the color of your shapes which is immensely disorienting. I sat down and played with the Roogoo’s creator Scott March and was instantly schooled multiple times despite the fact that I always thought I was pretty good at the game. 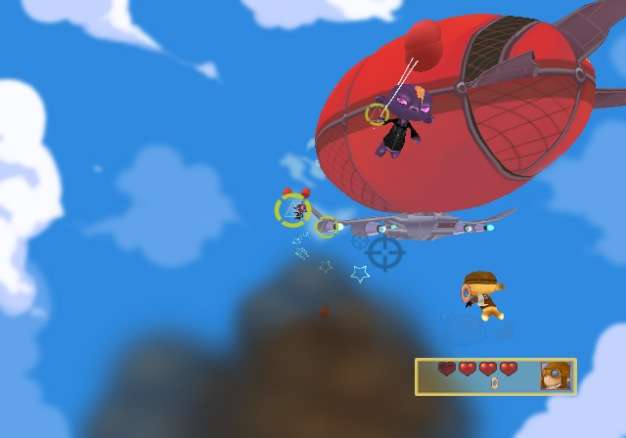 After this we headed over to Twisted Towers where I was surprised to see how much restraint had been used in the motion controls. Once again the basic formula is the same, but thankfully Spider Monk, the game’s developers, didn’t make platform rotation motion based. Players simply hit the C button on the nunchuck to rotate to the left and the B trigger on the Wii Remote to rotate right. Graphically the game has the same style as the 360 and DS versions too.

The new stuff going on with the Wii is plentiful though, thanks in most part to the uniqueness of the control scheme. For starters players can now catch pieces if they are knocked off or they miss a correct shape. By pointing the Wii Remote at the screen a net appears and if players successfully catch one of the pieces which have fallen they’ll pop back up. This of course could make the game far easier, but I wasn’t feeling it from what I played. Also new to the Wii are platforms at multiple angles (thus the twisting towers). As the bricks fall they may follow a path that lands them on a platform that’s perpendicular to the one above it or at some other odd angle. Lines show where the bricks are going, but it’s still a neat twist on the game.

Skydiving levels also make an appearance in the Wii version. March said they put these levels in because he was trying to think of a way to do Roogoo from the opposite point of view. Thus players once again take on the role of a cuddly little teddy bear thing and jump out of a plane. These levels are more ingrained into the story of the game and involve more dodging than shooting for points than the DS ones. Once again players can only move in a circle as they fall and can shoot at oncoming objects, but collecting shapes is also a big part of the level. 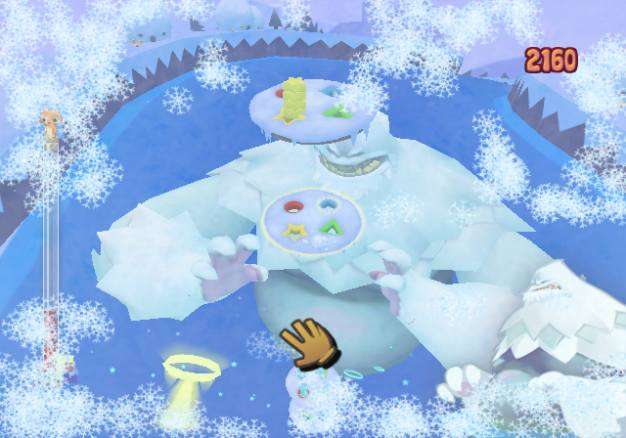 None of this really showed off what was different truly different about Roogoo on the Wii, however. Once I got my hands on the boss battles for the game it was clear though. Boss battles in Twisted Towers take the basic puzzle mechanics of Roogoo and throw an enemy in who messes with your gamplay. The first one I played was against a vampire, which wanted to suck the life out of my falling shapes. To do so it would turn into a bunch of bats and fly around my falling shapes picking them up. I had to use my net to catch the bats and then catch the shapes I lost in mid-air. Once I had caught all the bats I had to start beating up on the vampire itself. This is all going on as I was desperately trying to catch the shapes and rotate the platforms correctly.

Another boss was a giant snowman who would blow over the screen neccesitating me to rub it off quickly with the pointer from the Wii Remote. After I finally got all my blocks stacked up on the bottom level I had to launch them over the creature to the final platform by waiting for him to duck and firing them off. Each world in the game will have a boss and there are a total of eight worlds to play through.

I’m pretty enamored with Roogoo so it’s hard for me to predict that the new games will be anything but fun. Once again I found myself returning to the SoutPeak booth for just one more level. I encourage everyone to at least download the demo on XBLA and see how much of blast the game can be. In accordance with the ideals of previewing a game I should probably also say something about how it could totally suck, but I leave that up to those who aren’t in love.

Roogoo hits the Wii and DS in the second quarter of this year.