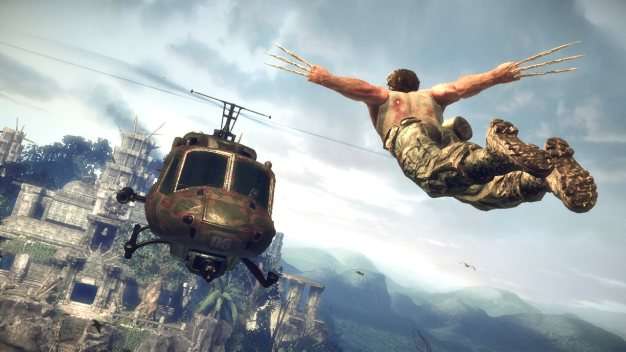 I am absolutely, positively, without a shadow of a doubt sure that I am supposed to inform you that X-Men Origins: Wolverine, the game based on the upcoming movie, is exactly how the fans have always wanted to see Wolverine. This fact was told to me multiple times by the developers and marketing guys at Activision’s event before NYCC on this past Thursday night where us lucky members of the press got some hands-on time with the upcoming brawler.

What exactly does “what the fans have always wanted” mean? It means Wolverine dicing and slicing people up all over the place. It means seeing his mutant healing factor working as he gets torn apart by bullets and it means over-the-top action like taking out three helicopters in a row by jumping from one to another. Basically it means a bloody, furry, limb hewing videogame replete with everyone’s favorite X-Man.

X-Men Origins: Wolverine follows the plot of the film, but like most movie games fleshes it out a bit more so that, for example, instead of Wolverine taking out one helicopter in an action sequence he takes out three. We actually only got to watch the triple helicopter take-down, but we did get to take out one of them in the level we played and it’s ridiculously cinematic looking. Of course that also means it’s mostly quick time events, but from what we played it looks like actions like these are interspersed throughout the world so that they flow with the gameplay instead of bringing it to a jarring halt like QTE can often do. On top of the destruction of three helicopters we got to see a level featuring Wolverine in his classic blue and yellow costume, prompting everyone to instantly realize how dumb that outfit looks when the man wearing it is cutting people’s arms and legs off. 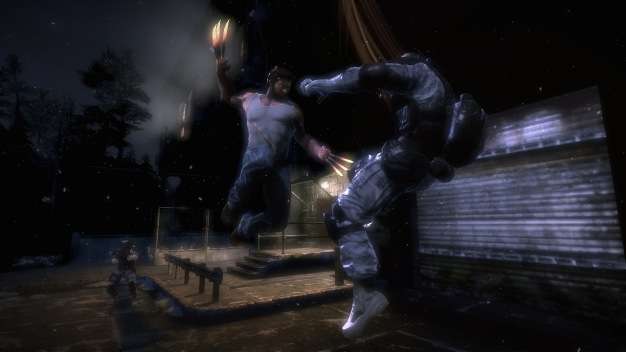 Goofy looking costumes aside, most of the time Wolverine looks darn pretty. Hugh Jackman is not an unattractive man and the devs have nailed his look and movements down very well. Wolverine’s surroundings are also pretty polished and when enemy’s limbs come flying off or their head goes rolling over the dirt it looks, well, nasty, but in the good way. Of course that’s not the thing that draws your eye. What is instantly noticeable is the damage that Wolverine takes. Every shot, knife wound and cut is registered on his body and eventually players can literally wear him down to the bone. I got shot a bit too much and quickly turned around to run for cover only to see Wolverine’s lungs and skeleton staring at me as his skin and other layers had been shot away. Once I got to cover his mutant ability kicked in and it all started to heal back.

We got our hands on one of the earlier levels that takes place in a jungle and begins with Wolverine’s plane blowing up, forcing the clawed mutant to skydive towards land and land on top of one the enemy soldiers. Once the player gains control he has to start killing guys left and right. Basic brawler rules apply, with jump attacks, regular attacks, strong attacks and charge attacks applying. If you grab a guy you can either tap strong attack in order to perform a vicious dismembering or throw him against a wall. The former requires you to time another button press to a flash on the screen, the latter allows you to us the environment. For instance I was standing next to a sharp pole sticking out the ground and I picked up and enemy and impaled him on it. 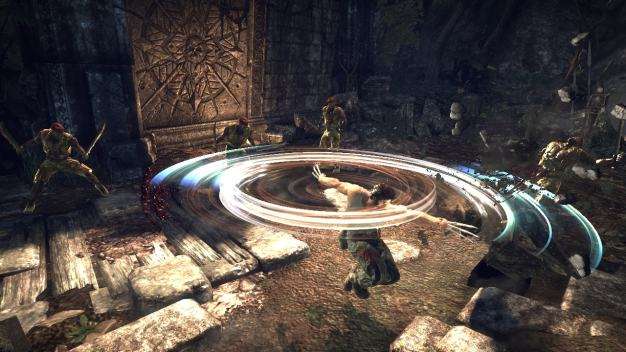 Wolverine will also learn new abilities as players progress (and will level-up, giving him more life). One of the abilities we got to try out was the lunge. If an opponent is standing at a distance the player can lock onto them and then press the lunge button to catapult Wolverine, claws first, into the enemy. It’s a great way to jump into a circle of guys and start the beat down quickly. Other abilities are more basic, like powerful spin attacks, and require some energy to use, which Wolverine replenishes by picking up glowing orbs that fall from his dead rival’s bodies.

All in all I had fun mashing buttons and chopping up bad guys with Wolverine’s claws, but it’s unclear how deep the game will go, or if Wolverine fans even want it to go any deeper. It’s almost unabashedly a button mashing blood fest, with QTE thrown in, but it doesn’t really seem to be asking for an apology. Like I was told over and over, it’s just the ass kicking Wolverine we’ve all been looking for; the question is will that make a good game?