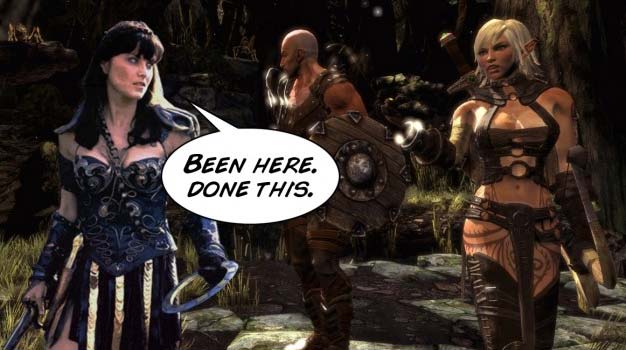 Lucy Lawless, star of Spartacus: Gods of the Arena and Battlestar Galactica, will be lending her voice to Bethesda’s upcoming tag team dungeon crawler, Hunted: The Demon’s Forge.

Lawless will voice adventurer turned temptress Seraphine, whose promises of wealth and power lures mercenaries Caddoc and E’lara to seek out an ancient artifact, the Demon’s Forge.  It’s like totally evil of course, just like Lawless’ character, a pleasant departure from her six-year stint as the titular Xena: Warrior Princess. “Hunted is an incredibly dark, intense game and I’m delighted to have the opportunity to work on such a thrilling project,” said Lawless.  “After playing the heroine for so long it’s refreshing to portray such a villainous, seductive temptress!”

Here’s hoping they let her rock her actual New Zealand accent – breaking out the Kiwi worked well for her role as D’anna Biers, aka Cylon Number 3 – but regardless, she’s got seductive temptress in the bag. She turns tin cans into gold, people. Into gold.