After spending some time previewing Crysis 2 multiplayer at PAX last year, it came time again to put our hands on one of EA’s answers to the juggernauts that are Halo and Call of Duty. We spent about an hour playing a few maps and modes of Crysis 2 multiplayer on Xbox 360, and here’s what we found.

First off, Crysis 2 delivers what you’d expect from a game developed by Crytek: it’s absolutely gorgeous. Built on CryEngine 3, the amount of detail included in the various multiplayer environments of alien-torn NYC is breathtaking. The rubble, burnt-out taxis, gushing water from broken mains, ashen-covered buildings, abandoned parking garages – the majesty of Crysis 2’s graphics is in this destruction.

Crysis 2 also checks the boxes of what’s expected of the modes, maps, loadouts and ranking systems in a standard multiplayer shooter. By the numbers: Crysis 2 multiplayer consists of 6 vs. 6 gameplay, in which Marines square off against CryNet’s C.E.L.L. soldiers. At launch there will be six modes spread across 12 NYC-based maps. The modes include:

You’re given four loadouts to start with – assault rifle, shotgun, sniper, and heavy machine gun – plus the ability to unlock five custom classes. Players can progress up to 50 multiplayer ranks based on points earned (XP). In addition to unlocking weapons based on points earned, there are more than 20 Nanosuit modules that can be utilized based on map and style of play. Multiplayer also comes fitted with 200 plus dog tags for vanity effect and 200 plus skill assessments to evaluate progress.

Crytek and EA let us loose on three different game modes: Team Instant Action, Crash Site and Extraction – and granted access to four maps: Skyline, a rooftop setting with select building access and cover, Sanctuary, a ground-based map surrounding a church in NYC, Pier 17, a mix of water and land set at the edge of lower Manhattan, and Parking Deck, a street-level map with back alleys and close fighting quarters.

I started off with “Team Instant Action,” the deathmatch mode, and quickly felt right at home. For anyone who has ever spent time in an FPS multiplayer, you’ll find that there’s little ramp up time with Crysis 2. All the buttons are where you’d expect them. The gameplay is smooth and the mechanics are sound. Since I was unable to rank up fast enough to unlock upgrades, I spent the most time with basic loadouts. I was hoping that Crytek would spice things up with some more futuristic weaponry for the basic loadouts (this is 2023, isn’t it?), but you’ll need to earn those. The basic weapons loadouts are solid, offering nice recoil, good bullet penetration and operate smoothly. “Gunner,” the heavy machine gun class, topped out as my favorite.

After playing a few more rounds of “Instant Action” it became apparent that Crysis 2 multiplayer is just that. Coming off countless hours of playing Call of Duty: Black Ops, Crysis 2 gameplay is noticeably faster.

The primary reason can be chalked up to what will be the make or break feature for Crysis 2 multiplayer: the upgradeable Nanosuit: the super-powerful battle armor that allows for enhanced combat. Ask any Crysis 2 exec what feature sets its multiplayer apart from the crowded genre, and they’ll say it’s the Nanosuit. 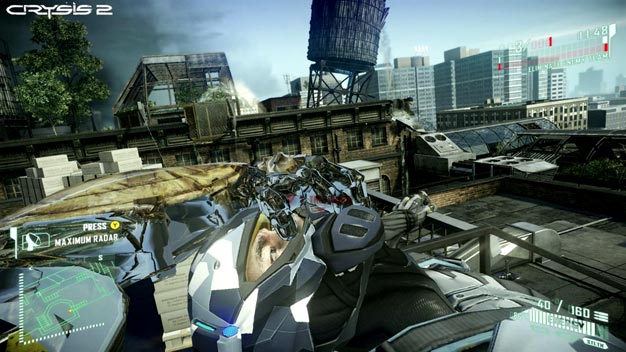 The Nanosuit allows for great vertical gameplay. It enables you to grab ledges, jump insane distances and sprint at breakneck speed. This provides a level of freedom and speed that’s sure to set Crysis 2 apart in the genre.

The Nanosuit goes a lot deeper than just speed and hops though. Players are outfitted with two basic features: Armor and Stealth. Selecting Armor let’s you take more damage, as well as dish it. It’s perfect for engaging in close quarter battles or activating just prior to traversing highly trafficked terrain. The real fun of the Nanosuit starts with Stealth, a feature that enables Predator-like invisibility for a short period of time. This is perfect for getting the jump on a group of enemies or taking control of a drop pod in Extraction. Another Predator-esque feature of the Nanosuit is heat-sensor vision that shows enemies lit up like Christmas trees. This feature provides a huge advantage and essentially renders you unstoppable for a short period of time.

The Nanosuit also provides other nifty moves such as an Air Stomp that prompts players to execute a ground-crushing blow after jumping a preset distance, and a ground slide that allows for quick fighting while hurtling yourself feet first into cover. It’s also great for stealing second base. Using the special Nanosuit abilities such as Armor and Stealth drain energy, so proceed with caution.

So, that’s the “make” part of the Nanosuit. The “break” part will be how other Nanosuit modules, or weapons, serve to help balance out gameplay. The Armor feature is great, but easily throws off how much damage weapons can yield. Often, I would dispose of one player easily only to rattle off what seemed like clip after clip on another to no avail. This quickly became frustrating.

Having access to only a few Nanosuit modules didn’t exactly help, but we expect the full version’s upgrades to help balance this out. The Nanosuit is more than just a series of perks; it’s a strategic utility and one that takes some time getting used to. Executive producer Nathan Camarillo assures us that extending and upgrading the Nanosuit “is not about making it more complicated.” For example, one stealth upgrade called the “Tracker” perk enables you to track footprints of enemy players using stealth mode. Perk. Counter perk.

All toll, Crysis 2 multiplayer offers a refreshing take on multiplayer FPSs. Players will enjoy the endless fun of invisibly walking up to a friend or loved one and snapping their neck, or taking the direct approach by  burying them deep beneath the streets of NYC with a well-timed Air Stomp.

Best of all: there’s even more maps, Nanosuit goodies and gameplay yet to be revealed.

Crysis 2 makes its official debut on March 22 in North America and March 25 in Europe on PC, PS3 and Xbox 360. Xbox Live Gold subscribers will get their first crack on January 25 when a limited demo goes live. For now, check the trailer above to see Crysis 2 multiplayer in action.