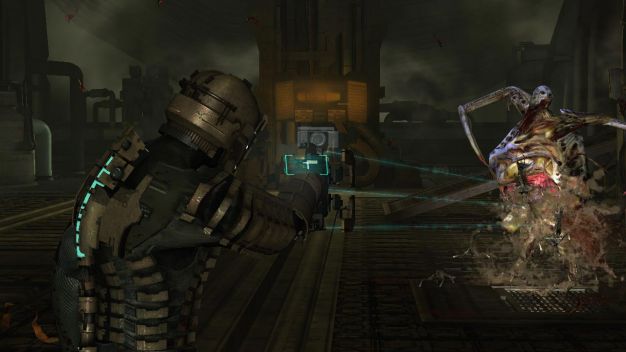 TVGB: The game has a heavy emphasis on dismemberment of bad guys. What was it like designing characters and gameplay around that theme?

BR: That was kind of our core vision from the start and the source of all our design decisions was around dismemberment. It was crazy. I’ve never done anything like that before. All the things you had to figure out if you go down that road. The primary thing whenever we designed an enemy was thinking what happens when you cut off a limb, or what does he look like so dismemberment is part of this creature. We have very few creatures in the game that aren’t dismembermable and then thinking about what happens when you cut that section and creating different variations in the way they look and behave. What we found was that the complexity of the enemies exploded when we started doing this.

The amount of animations we needed, the amount of engineering for the characters we needed; what happens if he’s missing one arm? What if he’s missing two? What if he’s crawling on the ground? Can he get into a vent? All these different questions that come up and we had to cover all those angles. One creature is a lot and we have 16 different creatures in the game and we’ve got a bunch of different weapons that all dismember in different ways. It was a lot of work but I think the result is awesome: you have creatures that really surprise you while you play and there are strategy decisions too. The creature in the game that we call The Pregnant, that has this big belly, that was a great character to reinforce dismemberment. If you just went for the chest shot or the stomach shot it’s belly rips open and all these critters attack you, so you have to dismember him to successfully beat him or you’re going to pay. Coming up with ideas like that was really fun. We have a character in the game where you blow off its arm and the arm might come after you.

TVGB: Do you think it’s this system that makes the game pretty challenging?

BR: Yea, we’re asking a little bit more of the player because you have to think. You can’t just aim for his nose and fire and you’ll succeed. It makes the game more challenging, but what it means is that every character kind of feels like a mini-boss so we can do less creatures with more interesting behaviors rather than just sending 30 bad guys at you and saying that that is what makes it challenging.

TVGB: The lack of a HUD is becoming more prevalent in gaming, and Dead Space is a great example of this. Why do you think that is?

BR: I think it makes the game feel more cinematic. I’m sure this is cyclical actually and games will go back to them again, but I think currently it feels a little outdated, like it’s sort of an older, archaic way of doing things and it becomes an interesting design challenge, trying to figure out how to convey the important information that you desperately need without having to have the HUD sitting on the screen, constantly reminding you that you’re playing a game. It’s rare to watch a movie where there is always an element on screen. I think there’s a move with graphic power being so much better in next-gen consoles to make the experience much more immersive and getting rid of all the little colored lines and everything is one way to do that.

BR: We definitely didn’t have the story nailed down (laughs). We started the comic a while ago, really before we even finished the game story entirely. It’s just been oversight really: having someone there to mind the story, making sure it was consistent, making sure the events that happened in one medium are reflected in the other, trying to do crossovers where one character shows up in another medium. There’s definitely work involved. What it does though, which is cool, is that it makes everything better. You make sure you’re game’s story is more cohesive because we have these other properties that were relying on that. It became a way to test ourselves and make sure everything came out making sense.

TVGB: Do you think this multi-media attack will be seen more often in the world of gaming as it grows bigger?

BT: I think we’re trailblazing a little bit here but there have certainly been other properties that have done this. I can easily see this trend continuing, though. There is something when you create a world like this and you create a videogame. You put so much into it. And the back story and making everything make sense, and not all that gets into the game. A lot of developers feel that way and now here are other outlets where you can learn more about the back story or tell other events or show different points of view. I found it really great that I could start the game story at a certain place and know that there are people who read the comic book and know the events that took place beforehand. So if we’re successful I think others will do it as well.

TVGB: So then this is just a wild guess, but a movie idea has probably been thrown around?

BR: Well that’s something because there is sort of a difference between what EA is actually pursuing and what as a developer I would want to see. So obviously when I’m looking at the game I’m seeing it as a movie and I think that there’s some great stuff there. I would love to see a movie and I think it would great as the game’s world lends itself to it.

TVGB: Would you want a movie that was based on the game or one that explores the Dead Space universe even further?

BR: I’m not sure. I think there is some stuff in the game that wants to be turned into a movie. I guess my preference would probably be making it based on the game and that would be a lot of fun. There are some scenes that we would just make awesome.

TVGB: What scene really stands out to you in the game?

BR: Yea, definitely. I think the whole opening of the game that brings you into the universe is something we’re really proud of and I think within the first level, the way you’re sort of drawn in is really immersive.

TVGB: Sounds awesome, looking forward to it. Thanks for talking.