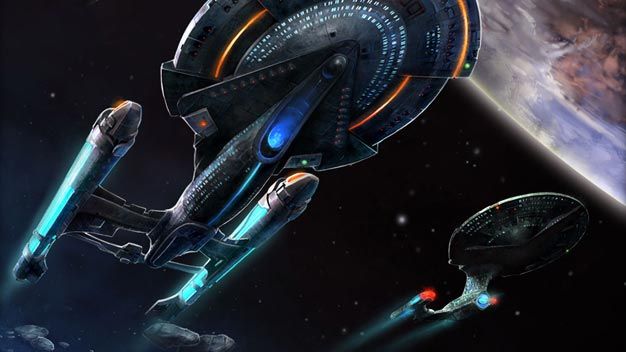 I sat down with executive producer Craig Zinkievich at PAX last week to talk shop about the upcoming Star Trek Online and our chat makes a pretty good primer for those who haven’t kept an eye on the game yet and don’t really know what to expect from it. As for the small amount of gameplay that I got to try, the combat is action based, in that you need to press the hit and fire buttons all the time, and is not automatic like KOTOR or World of Warcraft.

That VideoGame Blog (TVGB): Obviously Star Trek involves not only space travel/combat but also ground recon and combat. Was it a daunting task to create an MMO that would need both?

Craig Zinkievich (CZ): Yes it was, but in order to be true to the shows and movies that are constantly popping back and forth between space and ground, we knew right off the bat ‘oh man now we gotta make TWO games’.

TVGB: So what was your basic concept behind Star Trek Online?

CZ: Well when we got the license we sat in a room and were like ‘ok, what sort of game should we be making with STO?’ It’s not a case where we said ‘ok, its Star Trek and an MMO lets just apply it.’ There are a number of key features that really drove us in the way that we designed the game. The setting — the game is set in 2409 which is in the near future after Next Gen and Voyager, 22 years after the Hobus Supernova blew up Romulus and sent the guys back in time. So we wanted it to be familiar and yet a new setting for people to explore. Everyone is a Captain in STO. We thought about making the game where you were the engineer down in the transporter room pusing a button for 20 hours a day and we figured hey most people probably want to fly a starship so lets focus on that for now. It really is about space and ground and moving between the two, even within a single setting or event.

TVGB: Is the focus more on PVE/Single-player exploration aspect of Star Trek, or is there also competitive PvP?

CZ: There is all sorts of different content in the game. So there is the episodic content which is the instanced (separate load from main world) 5-man, or solo to 5-man team play, there is exploration content where you or your team go out to a star cluster and and say show us something that no one has ever seen before, and our Genesis system will algorithmically generate new content for you, and even some of the maps that have been shown were Genesis system created. The idea is that you get to go and see something that nobody has ever seen before, which is what Star Trek is all about! There are also large fleet actions/raid-sized content, 25-35 guys going in to beat off a large scale attack in space. Every captain commanding his own starship, but teamed up. There are definitely things you will need a fleet to take care of. And obviously, PvP. The Klingon faction and the Federation faction are at war at our time period. And there is battle all up and down the neutral zone.

TVGB: How has the PvP been received in your playtesting? Obviously it is different from an IP like Star Wars or Jumpgate where small fast ships are dogfighting, because Star Trek always has these elegant large scale ships that stand their ground.

CZ: What we found with the space combat in both PvP and PvE is the idea of positioning. Caring about your shield facing, your weapon facing, your firing arcs, there is just a huge plethora of strategies that you can employ, I mean you can send in a teamate doing really high DPS or your guy in your olympic class science vessel dropping enemy shields left and right, so yes these are large ships that are not zooming around, but there is a ton of action.

TVGB: Has the huge success of the new Star Trek film impacted the development of the game in anyway?

CZ: We have been working closely with CBS over the year to make sure that all the continuity is taken care of, so when it was decided to blow up Romulus we were told about that and said ‘oh thats fine in our universe’. Things that we are doing are also reflected in other places like the new comic books as well. I think J.J. Abrams did some really great things to update it and make it more accessible, and we have taken our timeline a bit into the future to advance the look and the feel of our universe. So yeah, there are some parallels there.

TVGB: Can we expect some in-game integration with the inevitable sequels to the film?

CZ: With any MMO you are constantly updating your content, and Star Trek is ripe with time travel and space time stories so it is easy for us, conceivably to go back in time and deal with the Abrams Star Trek universe, or really anything else if we need to in the future.

TVGB: Is there a lot of that time travel and parallel universe content in the game now?

CZ: Yea I mean it’s Star Trek. We sit in the office and go and write down everything that we could do like; time travel, mirror universes, wormholes to the gamma quadrant, and we gotta put all the stuff in there, it is definitely in there.

TVGB: So what can we expect by way of famous Star Trek characters?

CZ: Well most of the famous characters are retired or passed on by our time, but you get to see descendants, locations and events that they put into motion, but you won’t be literally hanging out with Spock for example.