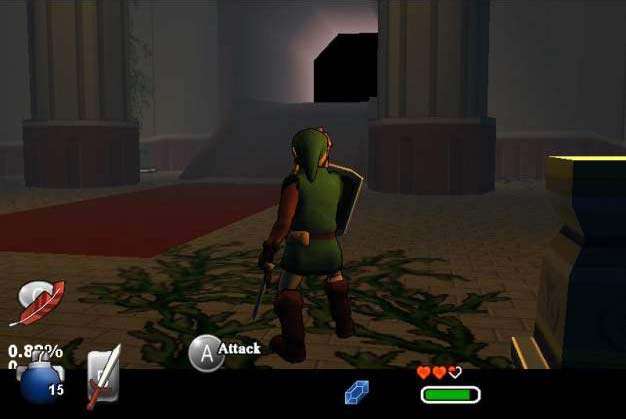 It’s not often that an independent amateur developer attempts to remake a classic game all by himself, so when we found out about Jerrel Dulay we were more than a little intrigued. If you didn’t hear by now, Dulay is creating a three dimensional version of the classic Game Boy title, The Legend of Zelda: Link’s Awakening. Not content to just remake an entire 2-D world in 3-D, Dulay promises to add extra dungeons and items to make this an almost entirely fresh Zelda experience. After hearing about his grand scheme, we couldn’t help but wonder what the finished project, The Legend of Zelda: Ballad of the Wind Fish would feel like.

That VideoGame Blog (TVGB): What inspired you to take on this project?

Jerrel Dulay(JD): I was actually working on a different project, which was a completely original game where the player controls a character in a special biosuit that allows the player to ‘phase’ through walls and other solid objects to solve puzzles. I was just aiming to build a 3D game engine that would allow for fast paced, platforming action. I realized, wow, the engine I just built could play like a 3D Zelda game if I made a few adjustments, and so, being a fan of Zelda games, I started this project. For a few years, I’ve had in the back of my mind the idea of recreating Link’s Awakening in 3-D as sort of a mock-up of what would the game have been if Nintendo had made Link’s Awakening as a modern, 3-D game and not a handheld game from the early 90s.

TVGB: Do you work as a game designer or is this a hobby?

JD: I’m not a professional game designer by any stretch of the imagination. Making games is a hobby and a constructive way to pass time, but I’m also aiming to develop a career in videogame development.

TVGB: Wow. So is Link’s Awakening your favorite Zelda game?

JD: It’s a close tie between Link’s Awakening and Ocarina of Time. I know that the newer Zelda games have been struggling to break away from the shadow of The Ocarina and be better and different, but I just feel like the series has lost a lot of its charm as a feel good game. With Link’s Awakening and Ocarina of Time, I felt like the game actually wanted me to be playing it. With the newer Zeldas, I feel like the game doesn’t actually want me there and I’m only playing because it has Link and Zelda somewhere in the game. Link’s Awakening had a strong sense of adventure and it was an inviting, feel-good experience.

TVGB: Let’s get down to the game itself: Will converting the dungeons to 3-D be tougher than the overworld? I imagine Turtle Rock would be a project within a project.

JD: Actually, I’m gauging that the designing, modeling and building the dungeon will be loads easier than redesigning the overworld, due to the fact that the overworld has to feel big and open and inviting. The player has a chance to explore and see off into the distance, and so that means that the design has to be just right to allow the player to see just enough while not seeing that one map is actually disconnected from all the other maps and areas of the game. I will probably spend weeks and weeks on each one map area of the overworld, where as dungeon rooms occur in closed locations. As a developer, there is so much less to worry about when it comes to showing and hiding things from the player’s camera. In fact, I’ve already redrawn and designed the new Tail Cave [the first dungeon], and I think it will be a pretty exciting experience for fans of the original more so than first time players in that the areas and structure should feel familiar, while looking completely different.

TVGB: What about the side scrolling passages in some of the dungeons? Will you keep them in 2-D or will they also be remade in 3-D?

JD: I’ve considered two options for the side scroller sections. In some cases, I may take the camera and force the perspective to mimic the side scrolling action, while restructuring the level design to take advantage and incorporate appropriate obstacles, traps, hazards, and enemies. Option 2 would be to leave out the side scroller perspective, and build elaborate, puzzle and action oriented rooms, along the same style as the modern Zelda games. I may even do both!

TVGB: Sweet. I like that you’re willing to add your own style to the game. Another example is a new item, the Ocean Rod. How is this going to work? Will it take the place of the magic rod or is it a totally new item?

JD: The Ocean Rod is a totally new item. The Magic (fire) Rod will still be in the game, and will actually be introduced much earlier in the adventure than Turtle Rock. When I first started the project, I thought, wow awesome, I’m making a 3-D Zelda fan game, I can add all these crazy items and weapons! Eventually the adrenaline rush wore out and I decided on keeping the old items and adding new functionality to the existing items. I felt like the game needed more items and functionality due to the fact that only the sword, hookshot and bow were the primary weapons for most of the game. The Boomerang wasn’t available until late, and it was optional, and the Fire Rod came in way too late in the game. Can you imagine playing Ocarina of Time, Wind Waker, or Twilight Princess with JUST the Hookshot and Bow? I personally don’t think it would be that fun. In terms of the Ocean Rod, it works like any other magic consuming item. You hold the button down and Link starts charging up an attack. The longer you charge the attack, the stronger and longer lasting the spell will be. The basic function of the item releases a big water typhoon that spins around the point where the item was used. Link can jump into the spell to perform a super jump, allowing him to reach new areas. While using Bow Wow as an anchor underwater, the Ocean Rod will be the only usable weapon, and will gain a sword-like function. Link will also be able to interrupt the Ocean Rod charging process with his Bow to fire a Water Arrow.

TVGB: Wow that sounds fantastic. Any other notable original content? Will the Game Boy Color exclusive dungeon be included? Any dungeons exclusive to this version?

JD: In terms of original content, I will be adding at the very least two new dungeons. The Ocean Rod, being a major item, will have its own, full length dungeon which will be completely new, and the Bow Wow rescue quest will also be completely revamped. In the original, there was a cave with three rooms to go through before rescuing Bow Wow. Since Bow Wow is now an inventory item, a full length dungeon will be added to the game. I was considering a dungeon for the Cuckoo Balloons as well, since they are another key item which allows Link to access new areas. Other than that, I won’t be adding too much. I would have loved to added heaps of stuff but have decided to try and not alienate fans of the original game.

TVGB: Haha. It sounds like you’re adding plenty. When do you think you’ll be finished with Ballad of the Wind Fish and how will it be made available to fans?

JD: I wouldn’t say the game would be completed for a few years, considering that I’m aiming to accomplish what Nintendo does with giant teams of skilled developers by myself. This is also hoping Nintendo doesn’t send a Cease and Desist. I do intend to release the game on dungeon-to-dungeon basis, as I complete more areas of the game and complete more sections of the overworld map. The game will be in work in progress status for a long time, but I will definitely be making releases. So far, the only platform the game will be running on is PC, Windows XP / Vista, but it will have Wiimote support if your computer has a bluetooth capability, so you can pretend you’re playing it on the Wii, except with higher resolution.