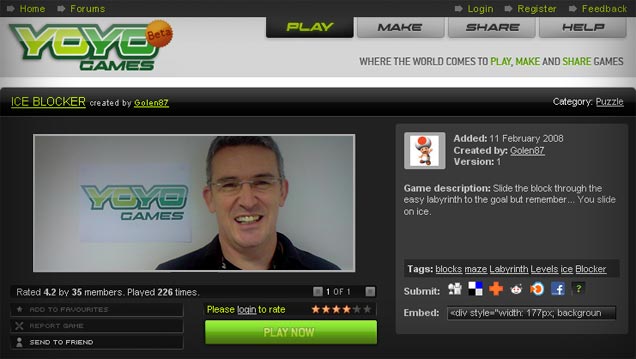 Sandy Duncan has been in the industry for a very long time. Throughout the years he has held a variety of positions, including spearheading the Xbox European business for Microsoft. His experience in the industry notwithstanding, Sandy is a self-proclaimed hardcore video gamer. “Video Games are in my blood,” he says.

In fact, when Sandy took a 2-year hiatus from the industry to try something new, he couldn’t keep up the facade for long. He ended up returning to the field, this time with a thirst to go above and beyond the norm. Thus was founded YoYo Games, a social platform that allows users to create casual video games to be played, judged, voted and showcased on the site. Within the first 8 months of launch, YoYo had surpassed over 10,000 video games uploaded, an immense feat in of itself.

We had a chance to talk to Sandy at length and get his views on YoYo Games (Part I), and the future of video gaming (Part II). Be forewarned however, insightful as Sandy is and impressive as his career may be, he has but one fundamental flaw: He is an Arsenal fan!

That VideoGame Blog’s Zee Salahuddin (TVGB): Your Linked-In profile states 16 years of experience at Microsoft, including handling the vice president’s role for Xbox Europe. What elements from your work at Microsoft precipitated the creation of YoYo Games in 2006?

Sandy Duncan (SD): I’ve always liked games. I really got into it heavily initially on PC when games started to use 3D graphics in an exciting way. My favorite games at the time were Descent and Doom (the very first, shareware version!) I got into console gaming with the launch of Playstation, though my favorite console of all time is Dreamcast … I still like to play the original versions of Soul Calibur and Crazy Taxi!

I set up and ran the Xbox European business for Microsoft. Although we launched in 2002 in Europe, I started on the project in 1999. It meant I spent a LOT of time getting to know the games industry, not just in Europe. I traveled a lot to Japan and the US as part of that. By the end of all of this work Video Games was in my blood. I tried doing other stuff for 2 years, but I always wanted to find a way back into Video Games…not as easy as it sounds when you’ve already had one of the best jobs in the industry in Europe!

In 2005 we were paid by a VC firm in London to do some research for them…we liked our research so much that we decided to “do something about it” and so I started working on the plans for YoYo in April 2006.

TVGB: What were some of the other factors that inspired you to create a social platform for budding casual game designers?

SD: To be honest we started out on a very different path looking to become a publisher of casual games. Then we noticed YouTube. In June 2006 YouTube was just starting to get big and people were starting to talk about “user generated content “and “Web 2.0” was becoming a buzz word. We could see the potential of the “YouTube” model in games …but couldn’t figure out how to make it easy to create games. Then by chance one of our Directors at YoYo (James North-Hearn) is also the CEO of Sumo Digital who are one of Europe’s top games developers. The top programmer at Sumo is a guy called Jacob Habgood who had just finished writing a book with Mark Overmars called “The Game Maker’s Apprentice”. It was a match made in heaven! This was early October 2006. We moved pretty quickly to close a deal with Mark and within 4 months the first (Alpha) YoYo Games website was up and running. We launched the full (Beta) site in late April 2007.

TVGB: It was announced on January 21, 2008 that in a mere eight months, the website reached a record 10,000 game uploads, making it the premiere repository of user-generated games. What were the critical success factors that contributed to this unprecedented level of achievement?

SD: Our first challenge was to win the confidence of the Game Maker Community. Game Maker has been around since 1999, so there were already thousands of people using it. Luckily for us there wasn’t any truly great place for the community to post the games they had developed and get them reviewed and most importantly played. I won’t say we didn’t make any mistakes, because we did. But getting a site with a simple method of uploading your games and making it easy for casual visitors to play them was the key. We added the “Instant Play” feature to Game Maker in September 2007, which meant you didn’t have to download the game before you could play it and from there on the number of visitors took off. If you have almost 1 million people coming to the site every month, then there is plenty of incentive for the Community to keep writing and uploading new games as they have a readymade audience.

TVGB: Technology has advanced tremendously over the years. Video games are becoming increasingly sophisticated across all verticals including storyline, innovation, graphical eye-candy and intuitively original game play. Since Game Maker allows users to do as they please, could this result in a flood of mediocre, half-thought-out games that may reflect poorly on YYG?

SD: Not every video on YouTube is a “LonelyGirl15” and not everyone on Facebook has 10,000 “friends”. One of the well-understood “features” of social networks is called “The Long Tail”, which means that even the less popular content gets an audience. Even the 5000th ranking game on YoYo gets more than 20 plays every month. For a lot or developers that’s very, very rewarding. Like all social networks our community contributes not just the content, but also makes a very significant contribution by rating and reviewing games…so people who come to the site who just want to find the best games will not be disappointed as they are easy to find.

TVGB: What are some of the measures in place to counter such issues, if any?

SD: Much of the work that we will put into the site development in the next few months will be focused on making sure that the best games are even easier to find. At the same time we have ambitious plans to offer more free packages of development content (Sounds, Backgrounds, Sprites etc) which will be available to anyone. This will help ALL of the developers. We will also offer the best guys some personal support later this year and ultimately we will spend money on the best games to help “polish” them ourselves. None of this has been formally announced, but we’re working on it.

TVGB: Game Maker is in its seventh release. What is planned for the near and distant future for YoYo Games? Will you offer much more advanced platforms that add several additional malleable layers of complexity for gamers to mould into content? Are there any plans to release commercial games at this stage?

SD: Game Maker will develop in 3 ways.
Firstly we are working on a version for the Apple Mac. This will be available in Beta around April time.

Secondly we are re-writing the “Runner” in C++ (currently GM is written in Delphi) which will give us several advantages, primarily portability. Our vision is for Game Maker games to be running on non PC platforms such as phones, portable devices and Consoles. For example, Apple’s announcement of the iPhone SDK last weekend was very exciting for us.

Finally we will start work on Game Maker 8 this summer. You won’t see it until 2009, but multi-platform support will be a key feature. We may also do something about a compiler around the same time.

TVGB: Who do you see as your primary competitors?

SD: Today there is really only one other website who are in this space. They’re a bit bigger than us, but they are purely a flash site which means that you can’t play the games offline and there is little prospect of seeing the most successful games being played on other platforms.

Stay tuned for Part II of the interview, in which Sandy shares some of his insights about the future of gaming and the direction the industry is headed in. Grab our RSS feed to make sure you don’t miss it.