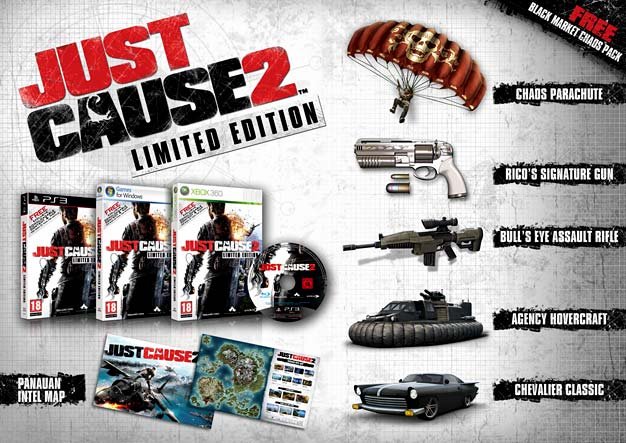 All the item details follow. For a bigger version of the image above, check the gallery.

Agency Hovercraft: The ultimate in amphibious transport, the Agency Hovercraft is the most flexible form of transport in the game. Equipped with a turret-mounted grenade launcher, you’re guaranteed to blow your opposition out of the water.

Rico’s Signature Gun: Customised by the Agency and adapted for Rico’s shooting style, this deadly accurate and powerful pistol has precision, power and flair.

Chevalier Classic: No agent should be without a hot set of wheels and with an increased top speed and superior handling, you can arrive at your destination in style or make a guaranteed quick getaway.

Chaos Parachute: Featuring a skull motif, make an entrance no one will forget … should you leave anyone alive to remember.

Panauan Intel map: With over 1000km² of tropical paradise to explore, the included fold-out Panauan Intel Map is an ideal reference tool for navigating around Panau, marking faction leader HQs, recommended BASE jump peaks and much more.