Light Fall is an indie momentum-focused, puzzle-heavy platforming game developed by Bishop Games. In Light Fall, you play as a little black, humanoid blob with glowing eyes (I won’t spoil you by revealing his identity in the review) who’s lost his memories. In your quest to regain your memories, find your friends, and unravel a mystery about the evil plaguing your home, Numbra, you clamber your way through side-scrolling platforming and puzzle sections, making careful use of your speed and momentum, and a strange cube – The Shadow Core.

The primary use of the Shadow Core is to facilitate you getting around otherwise difficult to access areas. When you jump, you can press the jump button a second time to have the cube spawn underneath you. The cube remains in this position until you jump and press the button again, where it follows you to become a new platform, abandoning its old position. You are allotted four uses of the cube in a row (shown on the side of the cube by the number of orange and red lights), after which you must replenish its powers by landing on a non-cube surface. You can also use the cube to activate machines like boats, rotate special platforms, and you can even use it to shoot beams of damaging light at enemies.

The core gameplay of Light Fall has little to do with enemies – in fact, very seldom do you come across enemies, and they’re all dealt with in one hit, or can be dodged entirely. Light Fall is all about exploring the world, helping your people, and learning about Numbra’s past. In each area, you will encounter many checkpoints, each of which has a certain number of yellow triangular sockets, and blue circular sockets. 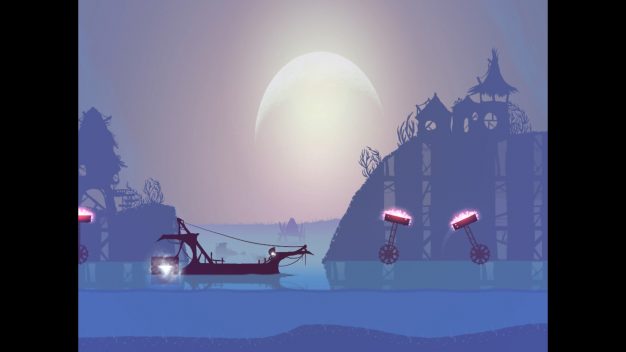 The blue sockets represent how many missing villagers are in the area, which you can locate mostly in secret areas that you find by exploring darkened, hidden sections of the level. In these areas you can also put yourself through much more perilous platforming sections in order to find and obtain yellow gems. If you manage to get back through the dangerous area in reverse and approach a checkpoint, the yellow gem will affix itself to said checkpoint and you will be rewarded with a lengthy diary entry from an early explorer of Numbra. Light Fall obviously has deeper meaning and purpose if you fulfill these level objectives, although it can be just as fun and less frustrating to fly through the area while working through the puzzles.

Throughout all of your exploration and puzzle-solving, you are accompanied by an old Night Owl named Stryx, who feeds you exposition and comments on you being a bit of a reckless menace. All in good fun…probably. Stryx has one of those wise, teasing old man voices that you would expect from a narrator in a PS2-era RPG. By that, I mean that he should probably speak less than he does. There’s nothing wrong with the voice, but it’s absolutely grating to hear it every five or ten minutes, commenting on what you’re doing. 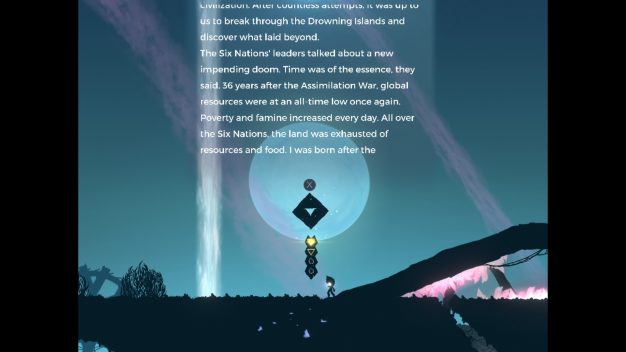 Despite spending most of the game wishing that Stryx would shut up and even thinking that the story was interesting enough but ultimately nothing special, once I was given Stryx’s backstory I gained much more appreciation for him. While his backstory isn’t necessarily groundbreaking or new, it was captivating, interesting, and explained a lot about his character. Indeed, the rest of Light Fall‘s story is average at best, but it’s propped up by a really beautifully-crafted, deep world. However, I will say that the devs should patch in a way to make the text on the yellow gem diaries scroll faster – they’re very long and I almost didn’t want to keep reading them because they took so long to scroll.

The graphics and world in Light Fall are simply gorgeous. The use of color and shadow and silhouette give it a decidedly indie feel without feeling generic and broody. It’s nice to see an indie puzzle platformer world that doesn’t live in greyscale and hasn’t been dipped in a vat of cuteness. You can passively interact with some parts of the environment (i.e. the bushes move when you run through them), which I always enjoy because it makes the background and foreground feel less static. However, it’s still not like every little branch quivers at your mere presence, but in a simple game like this I think that that kind of treatment would be overkill anyway. The side-scrolling and presence of fat pink crystals throughout the levels did give me Hollow Knight vibes, although I refuse to draw anything more than a passing comparison between the two. 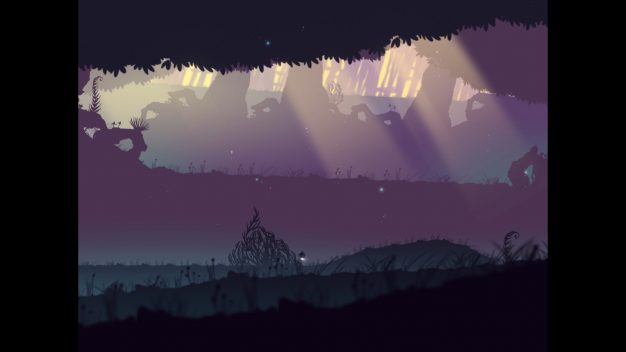 Light Fall‘s design is pretty and simplistic, but it feels and looks a little rough and pixelated at times. I did notice that on my computer, I could only get the game to play in a square box, rather than going completely fullscreen. I feel this is probably due to the game being optimized for play on the Switch before other platforms. Light Fall‘s soundtrack isn’t going to be one that sticks in your head. It’s light and pretty, predominantly made up of strings and bells, but it’s purely there for ambience, and it does that job well.

I’ll admit that when I first started playing Light Fall, I didn’t think I was going to like it. Every time I jumped and tried to cling to walls, it felt as though I wasn’t grabbing onto things like I should. When I jumped, I never went very far, and all of my movements felt a bit neutered in general. I started to dislike my experience and wondered if I’d get very far through it at all. It was only after a particularly hectic section of the game where you’re essentially racing against the clock did I realize that the act of running wasn’t just for speed – it was also for momentum. Once I realized that I regularly needed to make use of momentum as I controlled my character, I started to adore the gameplay. 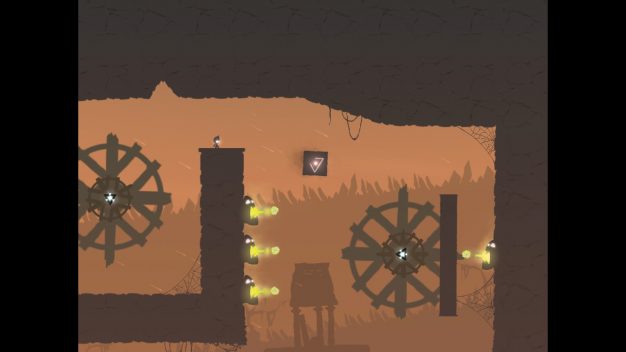 Know this if you are going to play Light Fall: this isn’t Crash Bandicoot – you need to run and go flying and make your distance and speed count. Dashing around like this made for some excellent platforming sequences where I was ducking in and around moving obstacles while deploying the Shadow Core, shooting enemies and then deploying again so I wouldn’t fall into a pit of spiky crystals. After a while you don’t even get mad at the difficulty because you’re having too much fun. That being said, some sections of the game, particularly in the final trials right at the end, are more frustrating than fun. Having to retrace your steps after claiming an important item, only to lose that item if you die on the way back, is agonizingly irritating. Quality of life in Light Fall could be greatly improved by the ability to hang onto items like the gems even if you do die, although that might just be me being a wuss.

You may be thinking that, based on my description, Light Fall would be an excellent speedrunning game. You would be correct, and the devs have already pre-empted you all by adding a speedrun option to the main menu as a matter of course. I actually can’t wait to watch people play this game in future Games Done Quick lineups. 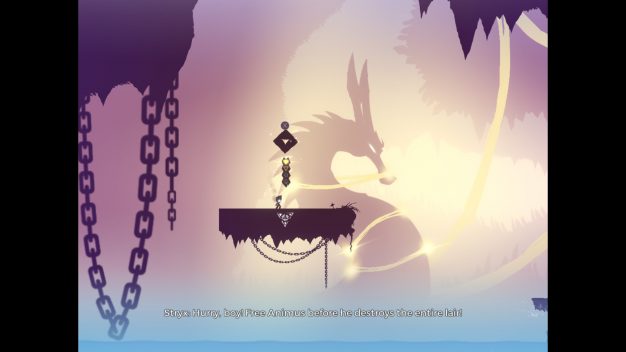 Light Fall is a surprisingly fun and engaging little indie title. It’s taken four years of development and a Kickstarter campaign to bring it to life, and it’s very clearly been a labor of love. Light Fall is rough around the edges, but its charm and beautiful design give it a strong foundation to stand on. If you’re a fan of platforming games, particularly ones that have fair but challenging difficulty, this is the game for you. If you’re a fan of speedrunning, you’ll have an absolute blast with Light Fall, guaranteed.

Light Fall is available now on PC and Nintendo Switch via the eShop.

Light Fall is a bit of a hoot

Once you hit your stride in Light Fall, you’ll have an absolute blast with it. I got way more out of it than I was expecting, and I definitely recommend this short but sweet, beautifully-designed world for anyone with a few hours on their hands.