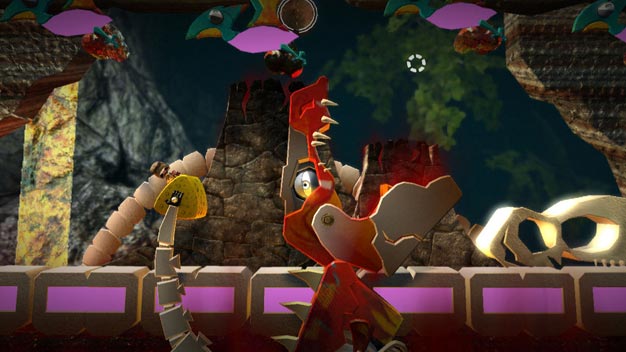 Those bummed over LittleBigPlanet 2‘s 2011 release have been catered to; MediaMolecule will have two doses of Sackboy goodness on offer next month.

First up is a Story Mode demo for the sequel. As SCEE’s Product Manager Alex Pavey writes on PlayStation’s official blog, the demo allows players to “experience the swinging good fun of the Grapple Hook, rescue some helplessly adorable Sackbots, and see the chaotic multiplayer fun that blows up when competitive scoring mode and some Creatinators armed with rockets are combined.”

It will be available via PlayStation Network starting December 22.

The meatier offering will be Sackboy’s Prehistoric Moves, a stand-alone, Move-enabled co-op-only game. This one requires one player to have a Move controller, while others will be forced to play with the trusty DualShocks: “The player with the PlayStation Move controller leads the way, flicking switches and triggering platforms to help the others, using DualShock Controllers, through each level,” Pavey explains.

“Leap between Dino heads, use the Move controller to blast aside crates of bubbles, ride dinosaurs through prehistoric cities and take to the heights of the prehistoric tree canopy – then team up to defeat Big Rex, all while collecting Trophies along the way.”

Prehistoric Moves will be available earlier, on December 15th, for €5.99. It’s also included on the LBP2 disc for free. Again, this is completely stand-alone then. Those who download it do not need a copy of LBP or LBP2.

LittleBigPlanet 2 itself will launch in January.