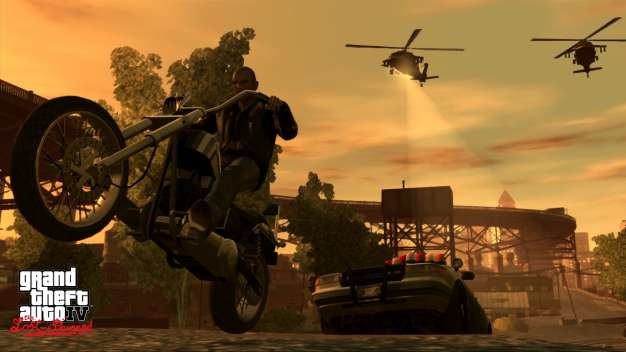 When most people think about the best games to take online and play for hours on end GTA IV usually isn’t one of them. Even though it boasts a lot of diverse gameplay modes and gives us access to all of Liberty City, it just could never stand on the same level as Halo, Gears or Call of Duty. Rockstar is hoping to change all that with additional gameplay modes that come with The Lost and the Damned expansion. CVG tested out six new modes that have been included that sound insanely fun. Here’s a rundown of what’s in store for us.

Bike only races is a mode where up to 16 players can hop on bikes and take off towards the finish line. That sounds boring doesn’t it? Well how about racing towards the finish line armed with baseball bats? The X and B face buttons determine which direction we want to swing and holding one of the buttons will produce a charged attack.

Own the City is an eight player mode in which two teams attempt to take over territories. It’s sort of like playing Turf Wars that shipped with GTA IV. The difference is that territories are controlled by A.I. gang members. Once a turf has been taken over, friendly A.I. will spawn there. Another new feature is gang vans which deliver stronger weapons to computer controlled teammates.

Lone Wolf Biker can be played with up to 16 players as they try to take out whoever is designated as the Lone Wolf. I can only think of the Burnout Paradise mode Marked Man to draw a comparison to. It’s pretty straight forward.

Witness Protection pits bikers from The Lost against N.O.O.S.E., GTA’s version of a S.W.A.T. team. The cops have to transport witnesses to safehouses while The Lost tries to take them out. Once the cops reach their destination they must protect the witness as they enter the safehouse. Again, this mode is on the straight and narrow.

Chopper vs. Chopper sounds like a death wish. One biker has to outrun an attack chopper as it chases him around the city. Only two players can participate in this mode either as the biker or the chopper pilot.

Club Business is a task based mission where Angus gives orders players have to carry out. Once players gain enough favor, they become the club leader. If more players participate the task is to ride bikes in formation to gain money. Sounds very manly.