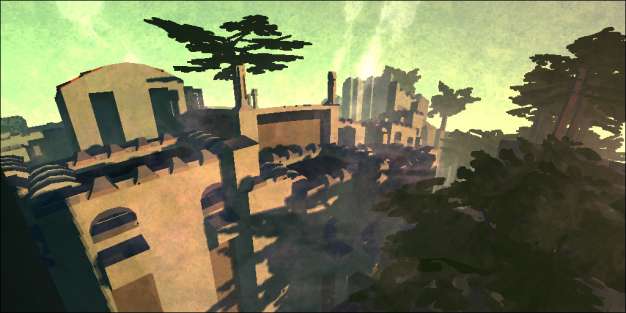 “If you have ever played a multiplayer game you have stories, stories of how you were the last survivor on your team, stories of how you captured the flag just before the timer ran out, stories of luck and failure. Love takes that kind of emerging story creation and expands it to a long lasting canon. Love is not a game you beat, it is a world that is constantly changing.”

Love is a persistent-world adventure game, with parts Tale in the Desert, Cooperative MMO, FPS, and RPG all thrown into the mix. Much of the game’s content is procedurally generated, and the whole of the game is being developed by a single man: Eskil Steenberg.

If you are confused about any of the things in the above paragraph, you are probably not alone. This takes some time to wrap your brain around. Steenberg is a very capable coder and artist, and with the onset of new technologies and procedurally generated game content has been able to make this game with no help or funding outside of himself. You can read more about all the details of his development pipeline on his blog/site, but I will try to get into some basics about the game, what it is about, and how it is being made.

Everything in the game can be built and destroyed, and the in-game tools for this seem quite robust. One of the most interesting features we have seen is the radio relays you can build. They are multi-frequency and can be used to communicate with other players, or to trigger devices such as explosives remotely. He also demos a great variety of things in the gameplay video such as power lines/relays, proximity detectors, turrets, protective force fields, and guns. As well as showing one of the ways that time of day affects the world directly: wind power. The game is intended to be alive, and always changing. Steenberg himself says that sometimes these changes are subtle on a day to day basis, but the computer is in charge of the world and will change it based on player activity.

“The game is based on a powerful procedural engine that creates a dynamic world that can be changed over time by players, characters, and the passing of time. The game can generate new landscapes, buildings, cities, secrets, characters and even networks of infrastructure and puzzles.”

One of the key features of the technology behind the game is something called Verse. Verse, in a nutshell, is a networking protocol that allows graphics programs to talk to each other in real-time (things like Maya, Photoshop and 3D Max) and is free. Using Quel solaar, a 3D engine designed specifically for use with Verse this single programmer and artist is able to procedurally generate large landscapes and cities of varying heights. It also allows him to work on all assets in the game, without recompiling the engine since all changes are made in real time while it runs.

If the technology interests you, check out this video where Steenberg demos his tools:

There are still a lot of questions about Love, and we don’t want to take the hype train about this game too far, because one man cannot possibly meet the expectations the gaming community can create in a couple years. But at the same time, this game is a feat of technology, while raising some interesting questions about game design. Games like EVE try to put players in charge of parts of the world like the economy, while games like Tale in the Desert give all the power to the players but ultimately don’t have enough direction to keep your interest. Ultimately the point of “games” is structure, but now the interactive world of videogames is trying to reach at the complexity of actual life.

Who knows what Love will ultimately bring to the table when it is done. Lets just hope that if it doesn’t work the way Steenberg envisions, there will still be a lot of progress made for the art of games as a whole.

As per indie standards, the game will be out when it is finished.