Who likes a good Western then? This is a genre that’s full of action and a million possible storylines. On account of this being more of a setting as opposed to a gaming genre per-say there’s a tonne of things that can be done with it; from shooter to RPG there’s room for all styles. This being said a new entry is set to appear on your console screens next month. It’s called Luckslinger and it all looks rather interesting.

Coming from the folk over at 2Awesome Studio, Luckslinger is an action spaghetti-western caper with a twist. Put on your boots and shine off your spurs because you have bandits to hunt. In this case, however, you aren’t interested in shiny, gold, rewards; you want their luck.

Luckslinger is partly inspired by the unrealistic gun-play, dark humor, and greed-driven anti-heroes of spaghetti-western classics. That’s just a theme though, this title is being stated as wholly inspired by vinyl digging, graffiti spraying. rhyming, and the slow jazzy drum samples of hip-hop culture and sound. Interesting combination right? If the two styles play well together we’re in for something truly unique.

Luck in Luckslinger is more important than anything. You’ll need to take down bandits and steal their luck if you are to win out. You’ll need to spend those lucky stars wisely because it’s these that will affect the way you play. The more luck you have the better your chances of bullet-evasion. Luck also affects the quality of the loot landing at your feet and, of course, your ability to stay alive. 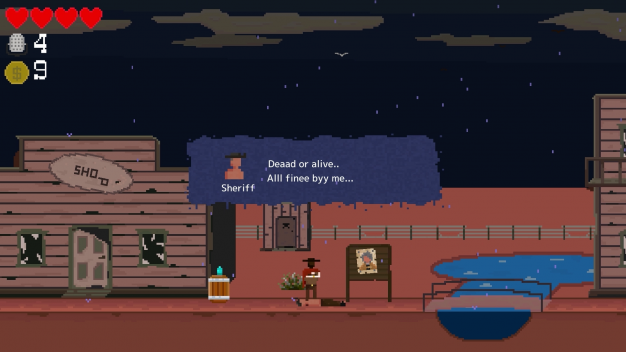 Being “down on your luck,” isn’t just a phrase in Luckslinger, it’s a very real problem. Aside from the obvious, tangible things like not getting your head shot off, negative luck can cause other, environmental problems. Collapsing bridges and rock-slides aren’t good for your long-term health. Bandits knowing where you’re sleeping at night is potentially worse and these are all very real hazards that you’ll need to look out for.

To give you a bit of the story, the town of Cloverscreek has been robbed blind. Six infamous criminals stole the town’s luck charms and it’s up to you to bring them back. As a rule, bounty hunters don’t do charity work so bringing in the bad guys is definitely going to be good for you, too. 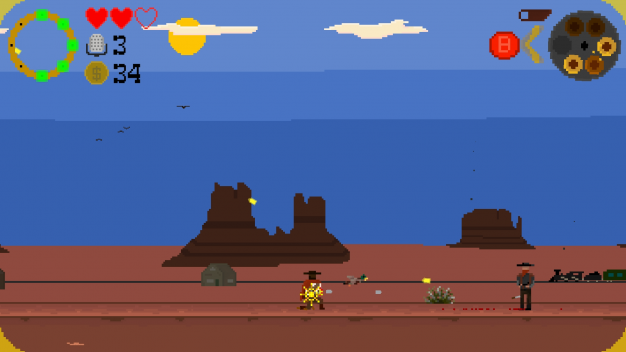 You aren’t on your own on this perilous quest. You have a hardened posse of gunslingers at your side at all times to help you run the bad guys down. Actually, that’s a lie. In Luckslinger your trusty companion is a duck. Duckbridge is your closest ally and will return throwing knives, pick up health, and distract the bad guys. This will only happen, however, when his tiny duck brain tells him to. Well you can’t have everything, can you?

So, that’s the spaghetti-western sorted. I bet you’re wondering where the hip-hop comes in? Well, this is definitely going to be very prominent in the soundtrack. After that, I’m not telling you anything other than it’s in the aesthetic. I’m clearly not going to spoil Luckslinger too much for you. It isn’t even out yet. 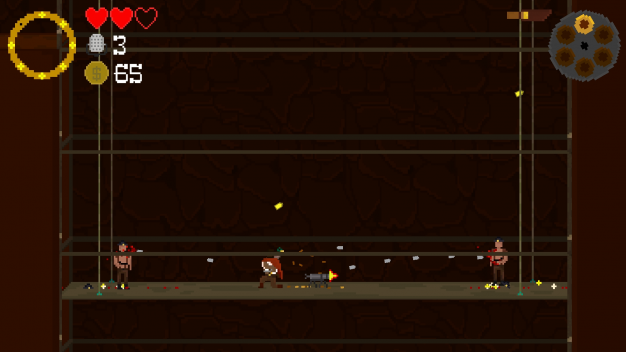 If you want to learn more about this interesting action-adventure you can preorder your Switch copy come March 26th, or March 31st for you Xbox owning folk. For the actual arrival dates; you can expect your PS4 copy to appear on April 6th and then April 7th and 9th for Xbox and Switch copies respectively. Pricing will be 9.99, (Euro,) with a 20% release week discount.

It’s always nice to indulge in something a bit different and I think Luckslinger defines, “a bit different, ” rather well. If you’re planning on thanking your lucky stars for this game you’ve only got a few weeks to wait.