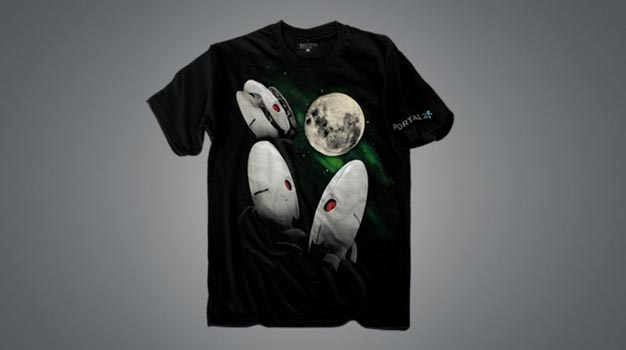 Okamiden, Minecraft, and World of Warcraft have all put their game-specific spin on that timeless staple of elegant casual wear, the Three Wolf Moon t-shirt, but there’s just something about Valve’s take on the fashion forward meme.

I think it’s the eyes. Or rather, it’s the eye. Those red cyclopean windows into the turrets’ complete lack of souls on the Portal 2 inspired Three Turret Moon t-shirt really captures the raw sexual energy of the original wolf pack. My only complaint is that they didn’t superimpose GLaDOS over the moon’s craggy face, but that would probably have been too much awesome to cram into a single wash cycle. Especially if you tossed it in the same load as your Three Keyboard Cat Moon t-shirt.