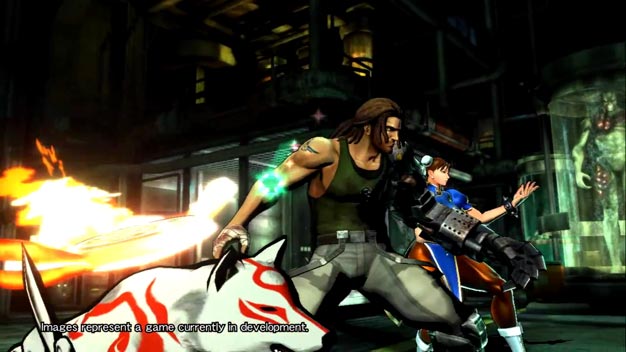 Super Street Fighter IV 3D is easily the best-looking and best-titled game for the 3DS launch line-up. You wouldn’t expect a fighter to look so polished on a handheld, but Capcom has done it.

With that in mind, we’d like to see how the publisher’s other big brawler, the upcoming Marvel vs. Capcom 3 would fare on the system. Ryota Niitsuma, the game’s producer and director has shared his thoughts with VideoGamer on a possible port, saying: “As a creator, I find Nintendo 3DS a fascinating piece of hardware. But I don’t think that directly correlates to the possibility of Marvel vs. Capcom 3 being on 3DS. Namely because, as you say, Marvel vs. Capcom 3 is a faster-paced game. It requires a lot more data, and it requires a lot more processing due to the many effects and up to six characters being on screen at one time.”

Plus there’s the problem of the 3D itself: “I don’t know whether having this in 3D vision is actually comfortable for the player or not.”

MvC3 certainly has a lot more flash to it than the latest Street Fighter, but is Niitsuma saying it can’t be done? “There are a few things to think about. It’s obviously not impossible, but it requires a bit of thought.”

Sounds like we’ll have to make do with the PS3 and 360 versions for now (not that we’re complaining). They launch on February 18th.