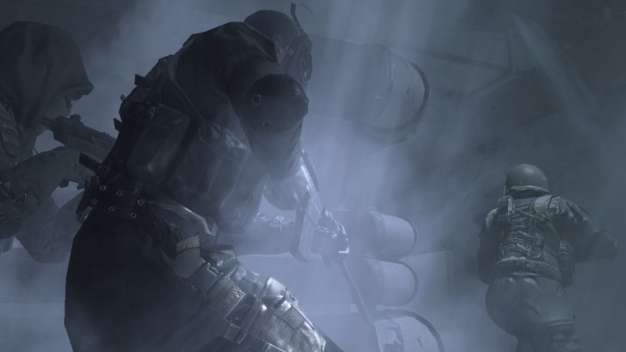 Some details have slipped out via an Infinity Ward Twitter page regarding Call of Duty: Modern Warfare 2. Apparently posted/twittered/tweeted (what is the right way of writing that?) by an IW play tester, the info has since been taken down and the offending twitterer banned and deleted. That could, of course, mean that the details listed after the jump are all nonsense, but we’ve run the info through the patented TVGB bull-o-meter and it smells fine to us.

There are some interesting details to be found on the list, amongst all the boring gun info. Take a look and you’ll find talk of new multiplayer modes, the addition of vehicles, a Halo-skulls style army tags system, a World at War-esque Zombie mode and online/offline co-op. Like we said, it’s interesting rather than surprising and if we were to base our expectations of Modern Warfare 2 on this info alone (a crazy idea, but one we’ll indulge for now), it looks like Infinity Ward are going for consolidation rather than revolution. Which is fine by us.

• Vehicles will be in MW2
• M16 will return, using stopping power will only be OHK at head, neck, and torso
(abdomen, limbs, and hands/feet will not)
• Ak47 and M4 will return, unknown if there are any changes
• M40 will return, ACOG damage boost will be fixed
• Scorpion, P90, M21, R700, G3, G360 will not return
• There are more unknown weapons that will not return
• New sniper rifle: SR25M (United states forces)
• New Assault rifle: Diemeco C8 (Canadian forces M4 equivalent)
• New Assault rifle: L85A2 (United Kingdom forces)
• Total weapons in multiplayer are said to be around 35
• Favourite Modern warfare 1 maps will return
• Helicopters, air strikes, UAV will return
• Red dot sightings will come in different shapes for multiplayer (circular, square, original)
• Snipers will have special grass camouflage (As seen in Modern warfare 1’s campaign)
• All perks will return from MW except eavesdrop and others will be altered
• All gametypes will return from MW and all will have hardcore versions
• New gametype: Secure (Call of duty version of capture the flag, however you capture
the enemy’s Intel)
• New gametype unconfirmed name, similar to search and destroy, however instead of
trying to plant a bomb, you try to kill a specified enemy
• Solider customization for each class (and each country)
• Sniper with silencers will NOT be in multiplayer
• There are NO bots in local multiplayer
• Similar version to Nazi Zombies, however details are unknown
• NO guest players online, 1 player per console
• Killcam save feature
• There is blood and gore
• Offline/Online Co-op
• Story takes place in the Middle East
• Role as US marines return
• Ken Lally voice work in campaign
• Release is set for sometime in November
• New army tags will be available to add different elements in campaign (similar to Halo
skulls)
• Campaign-only weapons