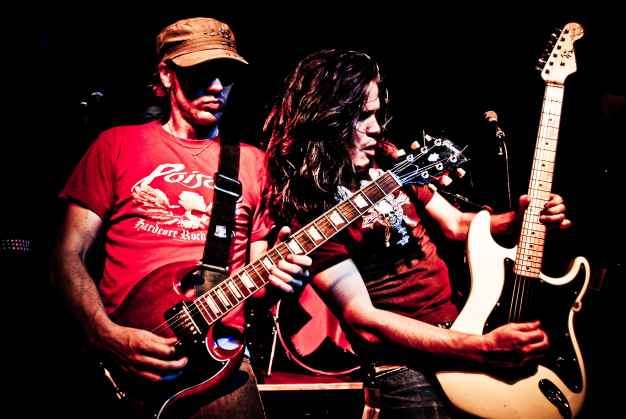 Usually when we conduct an interview with two of a band’s band members we’re talking to at least half the band. However in the case of Bang Camaro speaking with two members of the band is only getting to talk to 1/8 of the band members. Yes, Bang Camaro has 16 members, most of which are vocals, but luckily we got to speak with the band’s co-founders Alex Necochea and Bryn Bennett so we’re pretty sure we got the inside scoop.

Music from the band’s second album, Bang Camaro II, will be featured in The Sims 3 when the game arrives later this year, but the band is best known for their songs in Rock Band and Guitar Hero. In fact Guitar Hero was really one of Bang Camaro’s big breaks. With this in mind TVGB probed deep into the two co-founders’ psyches and discovered if they’re any good at their own songs and how they truly plan to torture their sims in The Sims 3. Oh, and in case you care about serious stuff and a chance to win things, check out their response to how important they believe videogames are to music. Then tell us your opinion on the subject in the comments section and you could win a whole ton of Bang Camaro and EA stuff including t-shirts and albums. 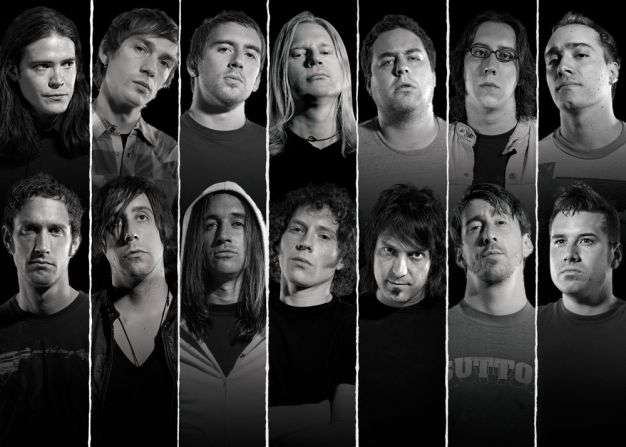 TVGB: Let’s start out with being featured in Rock Band. Did it change your fan base at all? Do you get more people who heard you there and jumped on board?

Alex Necochea (AN): Both Guitar Hero 2 and Rock Band went a long distance to increase our fan base. When we started the band we were completely unknown and that changed very quickly after “Push Push (Lady Lightning)” was included in Guitar Hero 2. With that exposure we were able to put the band in a van and travel all around the US and Canada to play to music for fans who discovered us through videogames. After Rock Band was released the number of people who got on the BANG CAMARO band wagon dramatically increased.

TVGB: Are you good at your own songs?

AN: Not at all. Playing our songs on a real guitar is less challenging than playing them in Rock Band. One time a few of us filmed a commercial for Rock Band Stage Kit and the director wanted to film a segment of us playing “Pleasure (Pleasure)” while fog blew all around the room. The crew was really bummed out to learn that we could barely get through the song on “Easy.” In the end they shot around us and ditched the shot of us playing the game.

Bryn Bennett (BB): I’m OK at them. I can get through all of our songs on EXPERT, but I’m barely hanging on sometimes. We have a lot of fans that can destroy us at our own songs. They find that hilarious.

TVGB: What to you is the most exciting part about having your music in a videogame?

AN: The most exciting part about having our music featured in videogamesis being a part of new tradition of music distribution. I have met so many people who say they have discovered some of their favorite music playing Rock Band and Guitar Hero. To be featured alongside huge bands like Black Sabbath, Nirvana, Radiohead, and Deep Purple is an incredible thrill.

BB: I’ve been a huge videogamer for my whole life. It’s a real thrill for me to just hear our songs in one. I was also the motion capture actor for the “rock attitude” in Rock Band. So, it’s funny to be able to watch the characters on screen move like me.

TVGB: Who is the biggest gamer in the band? The worst?

AN: We have a number of big gamers in the band. It’s funny being on the road and watching most of the guys get absorbed by their Nintendo DS’s while I stare out the window and read roadside billboards. That said, I am probably the worst gamer in the band. My fascination with video games came to a close when I could no longer find the original Tron at my local arcade.

BB: Mike Soltoff is a huge gamer. He’s been playing Warhammer on-line. Glen plays a lot of Xbox. I don’t have as much time as I used to, so I stick to more casual games like Puzzle Quest that I can jump in and out of.

TVGB: Does your tour bus just have a ton of systems hooked up so you can play each other?

AN: Where is our tour bus?!? I’m always forced to ride in the van with all the gear.

BB: Ha. A lot of us have Nintendo DSs. We get in some heated Mario Kart games and wake everyone else up when we start screaming at each other. There has been a lot of Final Fantasy going on too.

TVGB: Any gaming inspiration in your music?

AN: None, really. Our inspiration comes more from the music we loved when we were kids. Like a lot of people I spent an inordinate amount of time watching MTV, hopping around my living room with a tennis racket, and banging my head.

BB: There are some bands out there like The Mini Bosses or Boston’s Powerglove who play some awesome versions of videogame songs live. I really dig what those bands do, and technically it’s amazing.

TVGB: Does it ever get tough working with so many people in a band? How do you get aggression out?

AN: The logistics around keeping 12 or so people on the road in a single van can get a little hairy sometimes. Case in point: it is tough to sneak all of us into 2 hotel rooms every night out on the road. Surprisingly though, there is very little aggression to get out after spending an hour on stage jumping every evening. We seem to work it out in the music and not so much on each other.

BB: We have only been kicked out of one hotel so far, luckily. But yeah, sneaking into the back door of a hotel so we don’t have to pay for all 12 guys every night can get tiresome… especially at 4 a.m. when all you want to do is sleep.

AN: What did you try to differently on your second album?

AN: We toured on our first album for almost a year and a half so we were thankful to get back into the rehearsal studio and write new songs. This time around we wrote a lot of our songs with two guitar players in mind instead of three. We also wanted to stretch the concept of the choir a little more this time which translated into having some of our vocalists co-write with us, which is probably why this record is a little more vocal heavy than the previous one.

BB: I wanted to write a song that had double bass drum, like “Live Wire” by Motley Crue. I got the chance with “Blood Red Rock” and our drummer Pete did a great job with it.

TVGB: Have any of you been addicted to The Sims like so many people get?

AN: Honestly, I haven’t. I spend more time chronicling my shaving adventures on Facebook and playing my guitar than I do in front of gaming console. Other guys in the band would answer this differently.

BB: I played the first Sims game, and thought it was an amazing new direction in gaming. I loved how people found so many strange ways to basically torture their sims. Amazing! Like I said earlier, I don’t have as much time as I used to, so I can’t invest as much into a single game anymore. I can’t wait to see what’s new in The Sims 3 though.

TVGB: When you quit did you lock your Sim in a room with no doors?

AN: What a great reason to get into The Sims! I can imagine letting my sadistic freak flag fly.

BB: Ha! Like I just said! People can be brutal!

TVGB: What is the best thing about having so many band members? The worst?

AN: The best part about having so many people in the band is you never have to eat or sleep alone. The worst part? Same thing.

BB: Haha. I can’t add anything to that.

TVGB: What game would you love to see your music in?

AN: I think I would like to write an 8 minute metal opus for Gears Of War. Nothing goes better with blowing things up than sweet, bone-crushing metal riffs.

BB: Honestly, I am so happy to be part of Rock Band. We have songs in what I consider the most groundbreaking music game out there. It’s an honor!

AN: Since I’m not much of a gamer, I can’t be too sure. I used be a big fan of DigDug, but there’s not much of a soundtrack there. Is it too cliché to say I love the music to Star Wars: The Force Unleashed? Also, I like the main theme to Titan Quest, but I might be a little biased since we quote it note for note in our song, “Rock of Mages.”

BB: Super Mario! Just start singing that melody, and I don’t care where you are, people will jump in. Plus, watching Japanese guitarists shredding to that song on YouTube is awesome.

TVGB: How important do you think the gaming industry is to the music industry?

AN: Pretty important. A few years ago this would have been a ridiculous question, but seeing the success of games like Rock Band and Guitar Hero it’s clear that the gaming industry is making a big impact on the music industry. Since the Internet has made all kinds of music available, the music industry has been very slow to respond to the changing market place. Instead of finding a way to capitalize on new ways of music distribution, the music industry didn’t adapt fast enough. Fortunately, the gaming industry was there to fill the void. It’s amazing that games like Rock Band allow music fans to discover and interact with their favorite music in a new and meaningful way. I am very proud that BANG CAMARO has been fortunate enough to be part of this new tradition.

BB: And it’s only going to get more important.

TVGB: What do you think the next step in music gaming is? Any dream games that you guys want to play?

AN: I wouldn’t be surprised if big names in music start releasing their new albums with full album DLC packs included, like Metallica did with their latest album. The music/gaming community has gotten too big to be ignored by the mainstream. The demand for new music and video game content is now bigger than ever. I expect that trend to continue.

BB: I thought South Park’s virtual heroin game was the obvious next step. Chase the dragon anyone?