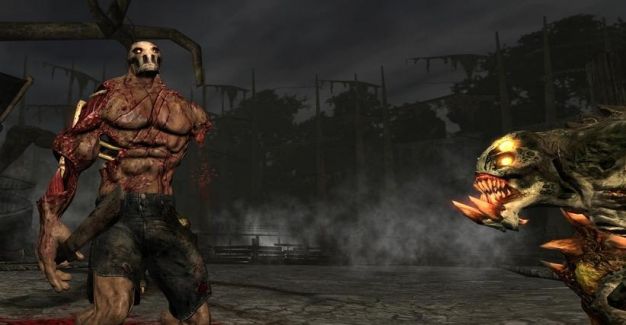 Over the weekend it was heavily rumored that Namco Bandai had basically driven up to BottleRocket Studios, the company developing the new Splatterhouse game for them, and taken Splatterhouse from them for no apparent reason. It turns out these rumors are true as official word on the project’s move from BottleRocket has come in. The strange thing is that the game was reportedly almost done and that NamcoBandai has given no reason for the sudden move.

“We have decided to part ways with BottleRocket Entertainment but we are committed to bringing Splatterhouse to the Xbox 360 and PlayStation 3 later this year,” a Namco spokesperson said. “At this time, we are not ready to discuss specific development details about the game and wish BottleRocket the best of luck in their future endeavors.” Ouch, and it doesn’t seem that BottleRocket has much of a clue about it either as all they know is that last Friday Namco pulled up and took everything, informing them on that day that they were no longer making the game.

It’s a tough business out there and evidently NamcoBandai has no time for pleasantries. This leaves BottleRocket up the creek in some ways as Splatterhouse was their only game in development at the moment. No word on just what the ramifications for losing the property will be for the company. Also up in the air is who will be finishing the game. Rumor has it that the same Namco in-house team that made Afro Samurai might be wrapping things up for BottleRocket.