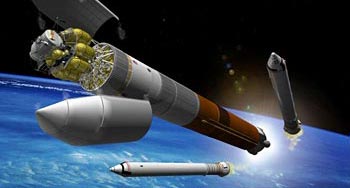 NASA is moving ahead with their plans to develop a massively multiplayer online game for teaching and recruitment purposes.

By developing an MMO that “could provide opportunities for students to investigate science, technology, engineering, and mathematics career paths while participating in engaging game-play,” the US space agency is hoping to train and recruit the next generation of scientists.

They’ve sent out a “request for information” (RFI) to see who’d like to provide them with a game engine that would include “powerful physics capabilities” that can “support accurate in-game experimentation and research”. The RSI states that “virtual worlds with scientifically accurate simulations could permit learners to tinker with chemical reactions in living cells, practice operating and repairing expensive equipment, and experience microgravity.”

NASA has been planning an educational MMO for a while. In March 2007, they issued a similar call but the project was pushed back and was in danger of cancellation because of budget cuts. But it seems they’ve now regrouped and have found the resources to move ahead with the project.