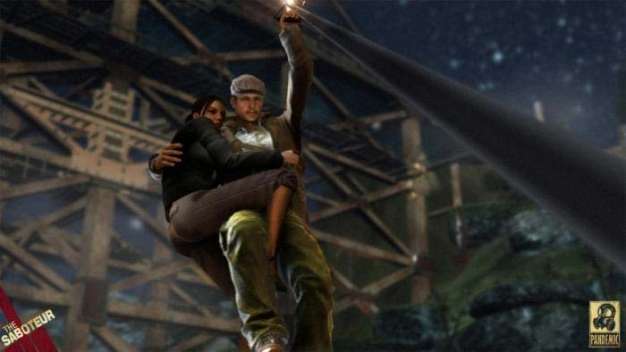 We got a little note from Pandemic studios today informing us that the site for The Saboteur had been been “refreshed and launched.” The first thing that went through our heads was how one refreshes a site that hasn’t been launched yet, but the second more important thing was wondering what the hell The Saboteur was. See we had forgotten that Pandemic had announced the game way back in March of 2007. We’d link you but that was so long ago that TVGB didn’t even exist (we’ve come pretty far, huh?)

The game, which we will tell you about now since we couldn’t then, will be an open-world shooter taking place in Nazi occupied Paris. Players take on the role of Sean Devlin, an Irish racing mechanic who is out to avenge the death of his family. This is the first time that Paris has been digitally represented this way so it should be interesting. Also interesting is the black and white mechanic that Pandemic will be using to notify players that they are in a Nazi occupied area of of Paris. If you head over to the site you can check out what it should look like, but it’s best described as a sampling of the scene from Schindler’s List where the little girl’s red jacket was the only color. The game will also be sporting something the devs are calling “The Will to Fight” where the city of Paris will react to your actions and start to fight against the Nazi’s. Sounds very interesting and we can’t wait to check out more.