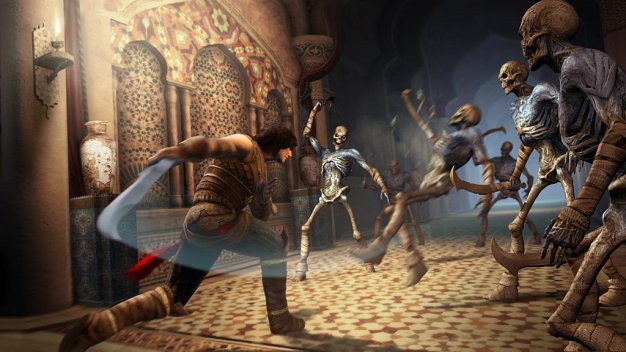 Ubisoft is cutting it a little close with Prince of Persia: The Forgotten Sands. The game’s been dated for a May 18 release yet there’s barely any information or screenshots out there. And exactly zero seconds worth of actual in-game footage.

Thankfully, a recent preview has brought forth some of those much sought after bits of info; As already known, the Prince of The Sands of Time trilogy is back and fans should be pleased. In addition to the acrobatics and time-rewinding capabilities that jousted those games into stardom, now magic has been added to the mix. The Prince can now for example momentarily solidify water, allowing players to run across waterfalls or swing across the water shooting out of spouts on the wall as if they were poles. An upgrade system has also been introduced. As enemies are reduced to piles of sand, XP is earned that can then be put towards upgrades for health, new moves, upgrading the Prince’s sword and powers such as Shield (knocks enemies back) and Tornado (take a guess). And all those upgrades will likely prove useful, too.

The Forgotten Sands will still have big bosses to beat but gone are the 1-vs-1-only fights of 2008’s POP — battles here can grow to 1-vs-50.

Overall, it’s sounding like Ubisoft has taken a step back and is building on the successes of the trilogy. Now if they’d just show the game in motion..