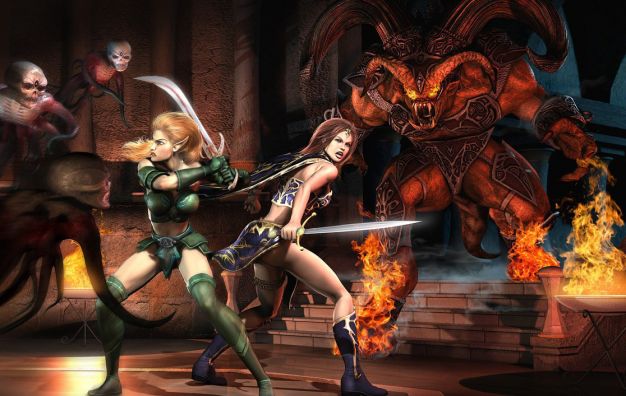 These two brave women warriors celebrated their victory by, like, totally kissing on the lips! OMG!

A study by University of Delaware researcher Scott Caplan, which examined gender differences in 2,400 EverQuest 2 players, found that 40% of the gamers were female. Who had smoking hot bodies. And who might be into threesomes.

“These are not people who are following strict gender stereotypes,” said Caplan. “I think that the game itself is right now a very non-traditional activity for women, and so I think what you would find in this population are going to be people who are in other ways less traditional than the majority population.”

Are you kidding me? I think lying in an anonymous internet survey to get a free in-game item is totally traditional! Patriotic even! Seriously though, do you think these results are even remotely accurate? Is Norrath really teaming with sexy bisexual babes or is this actually a brilliant viral marketing ploy perpetrated by Everquest‘s PR department?