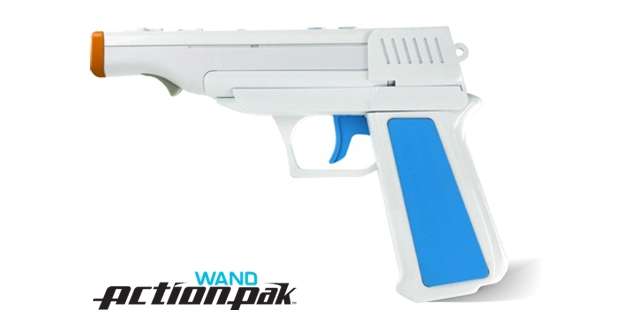 While Nyko’s knock-off Wii Remote The Wand might not be the prettiest thing around, having fallen out of an ugly tree and landed on every branch with a resounding thud, it does have a very interesting feature they’re calling Trans-Port technology which allows peripherals attached to map themselves to the controller’s buttons however a player sees fit. For instance if the A button is fire in a game then when a player uses a gun attachment they can map the A button to the trigger. It also does away with the need for peripherals to have sliding pieces of plastic that press the B button.

Nyko has now announced two attachments for The Wand that will use this technology and will come packaged with The Wand. The first bundle being The Action Pak which contains The Wand and the Pistol Grip attachment. The attachment allows players to digitally map A and B to either of the two buttons (the trigger and the harmer) on the gun, making FPS games where both are required so much easier to play with a gun peripheral. The second bundle will be the Core Pak which includes The Wand and a wired Kama controller with rumble. The Kama is Nyko’s version of the Nunchuck and uses the Trans-Port tech to give you the rumble in both hands — because there is no reason your non-dominant hand should be left out of the vibrating fun. Both packs will retail for $49.99 and hit store shelves in April.