It’s March. Spring Training baseball is well underway, which means the MLB season is nearly here. With the new season comes new the slew of excellent baseball games, namely MLB The Show and my personal favorite, Out of the Park Baseball. OOTP Developments recently announced that the newest iteration, OOTP 21, will release worldwide March 20 for PC and Mac. 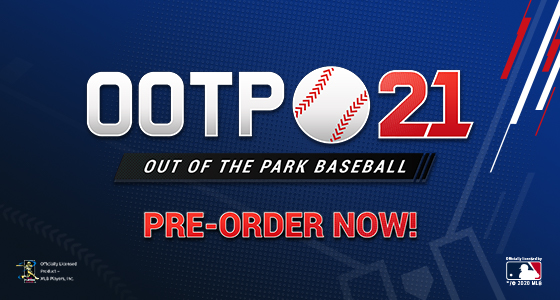 OOTP 21 boasts updated rosters, many quality of life improvements, and some new features to help us GM/managers out during the season. I’m personally excited for the new scouting improvements, which should help streamline research on prospects in the minors and potential draft picks. OOTP 21 will also take a step forward regarding 3D gameplay (remember this isn’t MLB The Show-style graphics) that should make managing games more fun, including the ability to construct your own 3D ballparks.

Another new feature this year includes events that center around the All-Star game, which includes the Futures game (with all the hot prospects) and the Home Run Derby. And for all you fans following the turmoil of the Houston Astros* during the offseason, developers confirmed that no trash cans will be featured and that they will lose their draft picks this year but not next (they apparently have no way to control that, but you playing Commissioner mode can help!).

They have been previewing these new features over on their Twitch channel, but you can find a preview of these in the trailer below. OOTP 21 is available for pre-order on their site with a 10% discount up through the first week of release. Steam users can drop it on their wishlist and get the 10% discount over there too when it’s available.