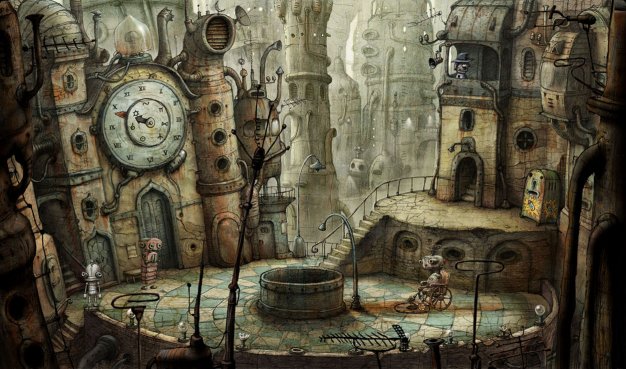 As exciting as it was to have the opportunity to play some of the industry’s most anticipated triple-A titles last week at PAX, I found myself spending a lot more time checking out some of the expo’s promising indie titles and speaking with their creators. As planned, one of my very first stops on the show floor was the booth for Machinarium, the gorgeously illustrated point-and-click puzzle adventure from Czech developer Amanita Design. The game’s designer, Jakub Dvorsky was on site to answer some questions I had about the game’s art style, its development and what kind of puzzles and adventures gamers can look forward to in the world of Machinarium.

Machinarium‘s unmistakable charm becomes immediately apparent after viewing a handful of screenshots. The backgrounds are richly illustrated, and the game world’s rustic steampunk-type aesthetic and diverse robotic populace still manages to maintain a visual style that’s uniquely its own. “It’s probably not your usual ‘steampunk’ genre stuff,” says Jakub after noting his love of industrial themes and robots. “Everything should look very organic, even though it [focuses on] just robots and a very mechanical setting.” The team behind Machinarium is a skeleton crew of just seven people, each specializing in a single part of the creative process. But Jakub makes it clear that this hasn’t stopped the creators from adding their own clever twist to the puzzle/adventure genre. “We’re trying to re-invent some of the older, well-known puzzles,” he says. “You’ll be surprised sometimes that [they] don’t work in the way you expect.” In addition, the game also seems to feature a good amount of environment-based puzzles, where using items and finding creative ways to interact with your surroundings will be key ingredients for progress.

After chatting with Jakub and getting some hands-on time, I can say with utmost certainty that anyone with a penchant for classic PC adventure games is going to fall in love with this game. There’s plenty of puzzling adventure to be had when Machinarium comes out for PC and Mac this October.