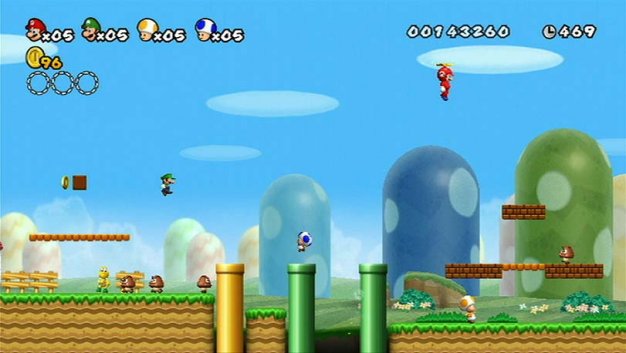 The goal with New Super Mario Bros. Wii, Mario mastermind Shigery Miyamoto told the press at a New York roundtable, was to focus more on a multiplayer experience. In fact, that was the idea from the series’ very beginning. “The original concept was that the Mario Bros. games would be games that two people always played together,” he explained, “but of course, the Super Mario Bros. series turned into more of a single-player game.” But since Miyamoto never lost interest in crafting multiplayer experiences and the Wii being what it is — a face-to-face social gaming platform for the living room — it seems the timing is almost perfect to release New Super Mario Bros. Wii, a game designed with local multiplayer in mind.

By going multiplayer, the game seems to also conquer, or at least compromise on, one of the biggest criticisms the Wii has received — not catering to the core gamer — by allowing the novice and experienced gamers to play together, “Because it is multiplayer, it has some new facets, in the sense that more advanced gamers can take care of novice players that might be playing with them, and …carry them through the levels,” Miyamoto explained.

It’s still possible to go at it alone but prepare to look serious if you do, “People would play the game and…people playing alone had a serious look on their face. They were working very hard…and it was a big challenge for them…But as soon as we had multiple people playing the game their expressions changed dramatically.”