After the semi-disaster of last year’s inaugural Pokemon Go Fest, I was slightly surprised when Niantic announced that the event was going to return to Chicago this summer. I knew there was no way they would take that risk unless they were sure it would go better this time. And once details about the event were released, it seemed like they had spent a lot of time over the past year figuring out how to avoid another catastrophe. We learned that Pokemon Go Fest 2018 would take place over two days instead of just one. Also, rather than being set in a cramped park with one entrance in the busiest part of the city, the second Fest would take place over a 1.8-mile stretch of park in one of Chicago’s other neighborhoods. In an additional effort to make sure the cellular networks didn’t get overloaded, the event organizers got portable cell towers from all of the major carriers, and prevented non-ticketed players from seeing anything in-game in the event area. There were still concerns, of course. For one, the ticket-selling process didn’t work as planned, with the website crashing and scalpers selling tickets on eBay for more than 20 times the $20 price. More recently, cellular network issues at Niantic’s recent event in Germany were not’ a great sign. Even the weather wasn’t on board, as thunderstorms were predicted for both days. Despite all of this, it sounded like they had everything under control (as much as possible) when the weekend finally came. 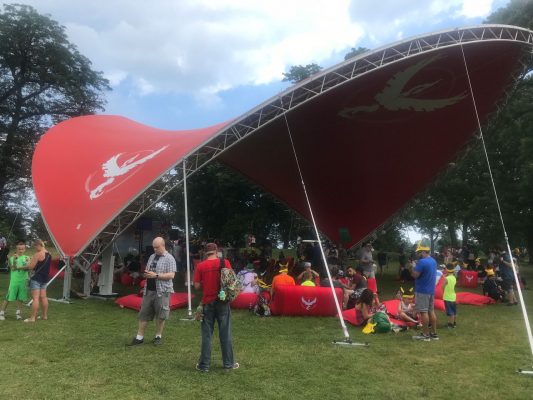 Fortunately, despite the concerns, the event went off without a hitch. Even the rain was mostly light, and it didn’t seem to discourage anyone from taking part. I arrived early for press check-in, and noticed that most of the people waiting for the event to start were gathering around the team lounges, which weren’t quite ready yet. The team lounges are a returning feature from last year, but they were much improved this year. There were tents for each team by each of the entrances, making them easy to access and not too crowded, filled with color-coded chairs and tables. In addition to having a place to buy snacks and drinks, the team lounges each included a dispenser of rentable battery packs, which is a much better option than just having a place to plug in your phone, especially given that the event was all about walking. Given the battery-consuming nature of the game, it was a great thing to include. While I waited to meet up with my fellow TVGB writer Joel, I interviewed some of my fellow members of Team Valor. They had come from throughout the country and the world, and none of them were scared away by last year’s problems. 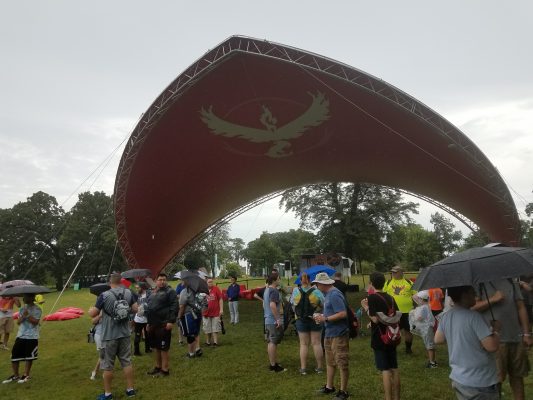 Once the event began in earnest and players started to spread out, an in-game “research” mission provided some order (and reward) to the event. Players were “contacted” by Pokemon Go’s resident researcher, Professor Willow, and asked to investigate a strange aberrations in the park. This took the form of a series of in-game challenges, much like the “research” quest to catch Mew that was introduced into the game earlier this year, but with the challenges tying directly to the event. Tying Fest together with a story was a great touch that added an extra bit of fun to the gameplay and really made it feel special. The aforementioned aberrations took the form of four physically crafted habitat areas spread out along the path between the two entrances. The habitats were small, but well-crafted, and really made the event feel unique and immersive. The volcanic habitat featured a volcano billowing smoke, the glacial habitat included an igloo and “storms” of fake snow, the jungle habitat blended in with its tropical trees, and the desert habitat made good use of cactuses, Pokemon and otherwise. These areas made great backdrops for AR pictures of Pokemon in the game, as you can see throughout this post. You’ll also notice that appropriate Pokemon spawned in and around each habitat, including a number of relatively rare Pokemon like Onix and Trapinch. Once players completed most of the research, we had the opportunity to catch the mythical Celebi, a Pokemon not currently available outside of the event. As a non-combat-oriented Pokemon, Celebi might not make as big a splash as the release of Lugia and Articuno last year, but it makes up for this by being exclusive to the event (at least for now). 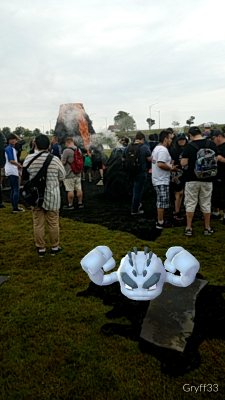 Pokemon didn’t just spawn in the habitats, though; a number of others tended to spawn near the entrances and tents. These included the event mascots Plusle and Minun, who appeared more frequently and whose shiny forms debuted worldwide during the event, and Pokemon like Swablu and Magikarp that require 400 candies to evolve. The biggest draws outside of Celebi, though, were the two Pokemon hinted at when the event was announced. The first of these was Torkoal, a 3rd generation Pokemon normally exclusive to India and the surrounding area. The second was Unown, a 2nd generation Pokemon that almost never spawns outside of real world events. There are 28 versions of the Pokemon, one for each letter in the Roman alphabet plus an exclamation point and a question mark. Different versions are available at different events, the ones at Fest spelling out “CELEBI?” Notably, this was the debut of the question mark Unown, making it the second Pokemon that so far has been exclusive to Fest. It’s probably no coincidence that trading was introduced to the game shortly before this; I know I caught a bunch of extra Unown and Torkoal for my friends, and I’m sure I wasn’t alone. 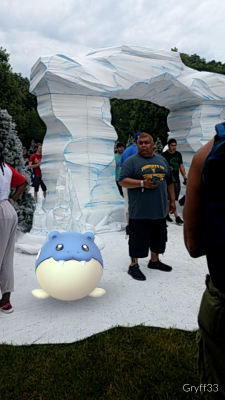 I know, I’ve already covered a lot, but I’m not quite finished. Every half hour, at each of the habitats and each of the team tents, staff members would host giveaways of exclusive Pokemon Go Fest merch. To win, trainers would have to either have the most or greatest of something in the game (e.g. number of hours played or number of Jigglypuff caught), guess the Pokemon associated with a Pokedex number chosen at random, or guess something else determined by the host. Once it became clear that there was no way I was ever going to win one of those prizes (I play a lot, but I’m not exactly “hardcore”), I started to wonder why there was no merch being sold at the event. The posters and shirts they were giving away would have flown off the shelves, and it would have been nice to give people another opportunity to pick up the team shirts sold at last year’s Fest (as far as I know, that was the only time they were ever sold). In between, the hosts at the team tents provided other activities. One of the Team Instinct tent hosts was helping connect trades. I was nervous to go in with my full Team Valor regalia, but Joel convinced me, and I’m glad he did: I’m now one Mewtwo short of completing my Kanto Pokedex. Anyone in the Chicago area want to trade? 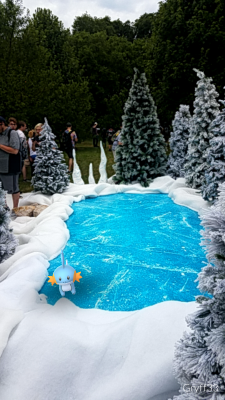 There was one other stumbling block I discovered as I worked my way through the research missions with Joel. The challenges were given in a sequence to match the layout of the event space, taking you from your entrance area to the habitats, and eventually to the other entrance area on the opposite side. That was the idea, at least. In truth, by the time Joel and I finished the first set of tasks (meant for the entrance), we had already gone through two of the habitats. As such, we had to double back in order to hit the ones we missed for the second set of tasks. We had to walk back and forth again for the final challenge, as it required catching 5 Plusle and Minun. And while Plusle was plentiful, it seemed like Minun was nowhere to be found (until after we finished the mission, anyway). We ended up going back and forth through the park several times, and by the time we stopped at our original starting area, we had walked at least 8 miles total. Annoyingly, there was one small change Niantic could have made to the first set of tasks that probably would have made this a lot easier. 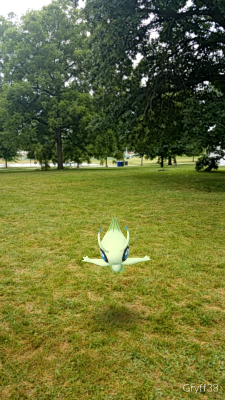 Still, even as my feet burned and my head struggled to stay awake, I got hope feeling immensely satisfied. Walking through the park with a friend while playing Pokemon Go is always fun, and Niantic made sure Pokemon Go Fest 2018 felt special on top of that. The physical installations and story integration took a game that’s already overlayed on the real world and made it even more immersive, and it felt awesome to finally get my hands on some Pokemon I’d been struggling to catch or evolve for ages. And of course, coming home with a new mythical buddy in Celebi felt like a real accomplishment, especially after all that walking. While they’ll definitely need to find a new way to sell tickets, I hope Pokemon Go Fest in Chicago continues to be an annual tradition.