Pokemon Go Fest has been a tradition for me for the past five years, minus one year when I wasn’t able to get a ticket. And while the event has changed in the world of COVID, last year was still a lot of fun. And with the return of (small) in-person experiences, 2021 had maybe the best Pokemon Go Fest yet. I’m so excited, even a week or more later, that I want to tell you all about it. But rather than just regale you with my own story, I’ve decided to format this year’s rundown as a list of tips for getting the most out of Pokemon Go Fest and other Pokemon Go events.

My buddy for the weekend.

Tip #1: It’s worth devoting the weekend to the event, or at least buying the pass

Making Pokemon Go fest work was a little difficult for me this year. Due to pandemic delays, the Chicago Auto Show took place over the same weekend. I was planning to go with my boyfriend Alex and a friend of his, but how could we get the timing to work, especially since too much walking in one day destroys my feet? We reasoned that we would take the day off work on Friday for the Auto Show. And I’m glad we did; in retrospect, if I had to cancel one of the two events, I would have cancelled the Auto Show. As I’ll detail below, Pokemon Go Fest was an absolute blast this year. I heard a lot of friends and other people lament that they missed out on it, so plan ahead and make sure to pay attention to the official blog and the in-game announcements. You’ll want to make a plan to spend as much time with Pokemon Go that weekend as possible. Even if you can’t, it’s worth the $5 for a pass so you can catch event-exclusive Pokemon with whatever time you do have.

The main part of the first day of Pokemon Go Fest is always focused on a special research event, as has been the case since the second year of the event. This year, Niantic mercifully made the research pretty basic and not time-sensitive (that is, it doesn’t require catching specific Pokemon that are available at specific times). This means you can do the research slowly throughout the day, without having to rush to catch the right Pokemon before they rotate out, which is something that was required in 2020. I assume and hope that this more relaxed take on the research will continue going forward.

My “band” at the end of the research.

This is the biggest and most important tip that I will give you, and it applies to any and all Pokemon Go events where there are many people playing around the same place at the same time. Niantic made trade paddles that you could print out yourself this year, along with having more professionally made paddles available as giveaways in the cities where they held the small physical events, but I made my own with the side of a cardboard box, a ruler, and a label maker (since nobody can read my handwriting). It transformed the entire experience. All you do is write down the Pokemon you want to trade for, and the ones you’re willing to trade away. Hold the sign up all day, and people will come to you. And people did come to me, be it downtown during the day, during the in-person event I’ll describe next, and even on the bus on the way home. Not only did I get some amazing trades (which I will list shortly), I met a bunch of really cool people I wouldn’t have otherwise met. And getting together is what the event is all about, right? During the event I managed to trade for the regional exclusive Pokemon Tropius, Pachirisu, and Pansear; the way-too-rare Pancham; and the alternate special version of Pikachu that I didn’t choose from the special research.

Me, looking nerdy as ever, with my trade paddle.

I realize this isn’t a tip that everyone can use, and there’s no way to know for sure if it will apply next year, but odds are pretty decent that it will. Chicago was the only place where the first two Pokemon Go Fests were run, and one of only three cities that held the third one. Niantic has a special relationship with the city, and boy did it show this year. I mentioned before that several cities had minor in-person events going on for Pokemon Go Fest 2021, but the biggest and most interesting was here in the windy city. People began reporting the appearance of a giant egg in a downtown park a few days before the event, and sure enough, that was for Pokemon Go Fest. During the first day of the event, people could line up in the park to be given special wristbands, which would allow them to come back at night for a special event. Projection effects on the egg showed cool visuals for each of the three teams, what the legendary raid eggs in Pokemon Go actually look like, and finally, four different legendary Pokemon that would appear in raids throughout the park. The in-game side of things wasn’t all that interesting (it was just 4 Pokemon that would be available in tons of raids on day 2 anyway), but the egg and the gathering itself were awesome. This was finally what the game’s original trailer promised. It featured Mewtwo displayed on screens in Times Square, with many players working together to defeat and capture it. Sure, it was at a park in Chicago instead, but it was still the same experience that the trailer presented. Below are some of the designs that were on the egg, including the unlit egg before the event with the screens below showing who held the gym it was sitting on. Naturally, Team Valor held on to it until the end. 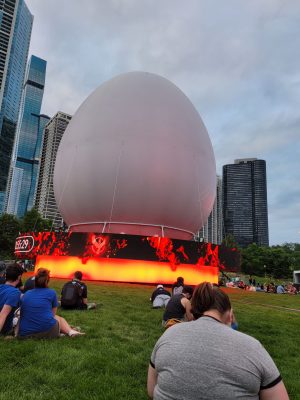 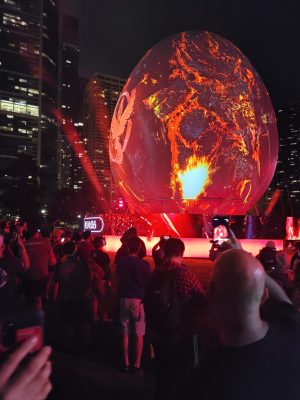 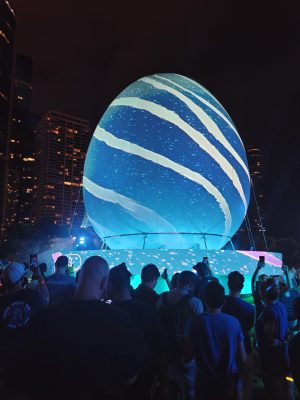 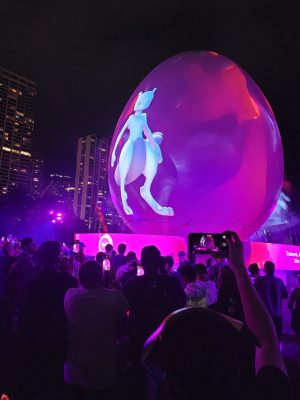 Day 2 of Pokemon Go Fest 2021 was all about raids. And even though we were downtown specifically because of all of the raid gyms, we still made use of a lot of Remote Raid Passes, as did everyone else, I’m sure. Niantic did provide event pass holders with plenty of free regular and remote Raid Passes, but given how every legendary Pokemon in the game was made available and everyone likes finding shiny legendary Pokemon, there was no way we would be satisfied with the number of free passes given. My boyfriend and I made the mistake of not having a budget set ahead of time, and suffice to say, we spent way too much money on raid passes that day. Not that it wasn’t worth it; I caught the legendary Pokemon I was missing (Reshiram, Virizion, Kyurem, and Terrakion), and my favorite of them (Terrakion) was even shiny. But yeah, we probably should have been more careful. 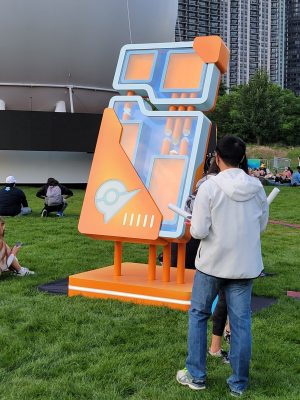 A giant raid pass set up by the egg. I bought too many of the in-game ones.

Bonus Tip: Know the difference between “legendary” and “mythical”

This isn’t an issue I ran into, nor is it big enough to be a numbered tip (especially because it’s pretty specific to this year’s event), but it’s something that I bet confused and surprised a lot of participants. “Legendary” Pokemon are the special, usually one-of-a-kind Pokemon available in normal play in the main series. So for example, Mewtwo is Legendary. “Mythical” Pokemon are those available through events and DLC only, and are not available by normal means. So for example, Mew is Mythical. So people who were looking for Mew or Celebi, or even Mythical Pokemon previously available from raids like Darkrai and Deoxys, were probably very disappointed.

Meloetta, the Pokemon available at the end of Day 1’s research, is Mythical.

There were definitely ups and downs (my wallet still hasn’t fully recovered), but nonetheless, I had an amazing time at Pokemon Go Fest this year. And for those of you who attended, I hope you had a great time too; please feel free to tell us your own stories in the comments. Right now the Ultra Unlock bonuses are active in the game, so enjoy that, and try to keep tip #5 in mind (and maybe tip #3, if you’re going somewhere with a lot of players). I’m already excited to see what Niantic has planned for next year. And who knows, if you follow tip #4 (or already live in Chicago), maybe I’ll see you then.