I’m a sucker for a good card game. Whenever a new one comes out I absolutely have to have a go and see what it’s all about. This is very much the case with Alchemical Inc, a story-driven, card collecting, and battling adventure that isn’t quite out yet. With this in mind, I had to see what was what and was really lucky to be invited to take a sneaky peek at where they were up to. Yes, I’m obviously going to share, which is what I know you’re all here for.

Your story starts with you being bequeathed your first alchemy kit by your grandfather. This is basically the tutorial and a clever vehicle for teaching you how to play the game. What I liked straight away is that even though you have to play the tutorial, (I know some of you really don’t like that,) it doesn’t feel forced or overly long. It’s blended into the story cleverly enough that it all fits rather nicely. 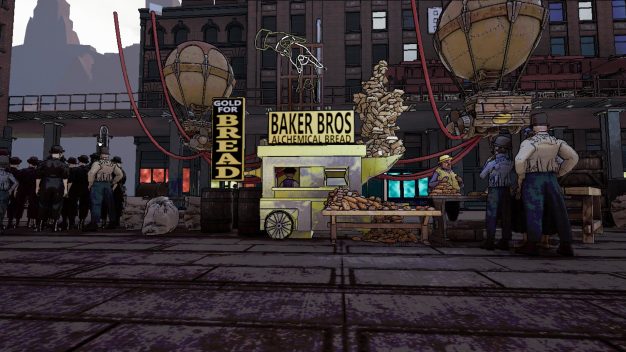 A card game in a beautiful, open-world? Yes, please!

The rules in Alchemical Inc. are pretty simple. You place cards into your kit which take the form of different chemical elements. It’s these elements that are your minions, (or monsters depending on what you’re used to,) and, therefore, what you’re attacking with. Your starting deck will have a base element structure, so in my case I chose earth. You then begin to fuse elements to form more powerful ones. The more powerful the element the stronger it hits but the more it can do. This also means that as well as collecting cards as you go, you’re creating new ones as you battle. I can’t stress how much fun this is because it means your game is evolving all the time. I’m assuming that in the finished title there will be a ton more combinations than there are now but experimenting to see which elements can become fusions and what they create is a really fun, innovative way to play. 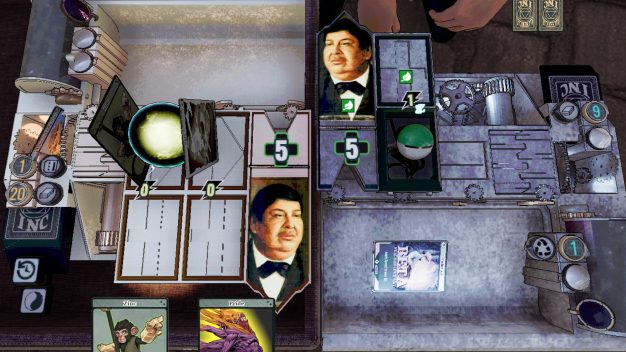 Those elements are merging into something new and undoubtedly more powerful.

Aside from the elements you also have traps and abilities that are set into your kit alongside them. You’ll need to work out the best balance of all of the different types of cards to ensure that your matches flow smoothly. This is great because a lot of TCG decks rely heavily on one type of card depending on what you want them to do. You might choose to have a bunch of powerful monsters or rely on spells to do the job for you. In Alchemical Inc. You can’t play like that and this makes deck building a lot more fun as you work out which cards sync nicely with which others. 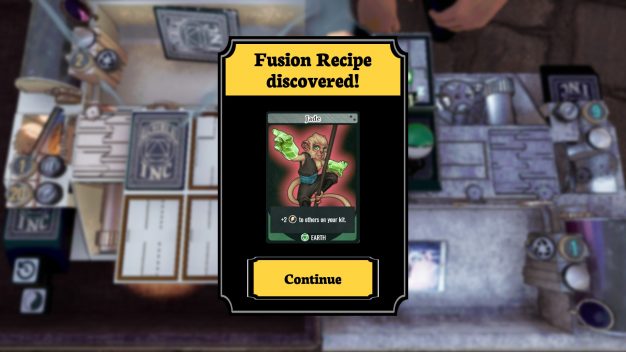 Fusions hit harder and do a lot more than basic elements.

As you beat opponents you’ll be able to win cards from their collection and strengthen your own deck. Aside from this, you’ll need a surplus of cards. Alchemical Inc. Is story-driven and you’ll need to be able to pay other characters using the cards you win as a currency to complete goals and further your quest. All you have to do in this iteration of the game is to buy a loaf of bread for your family. To do this you’ll need to gain a golden ticket from the Rat Queen who is basically a slum lord. To do this you’ll have to pay tribute to various members of her gang and eventually open the way to a final battle with her personally. All in all, there was a bit over an hour in gameplay there but that was enough to get a good feel for the game and give us an idea of what to expect. 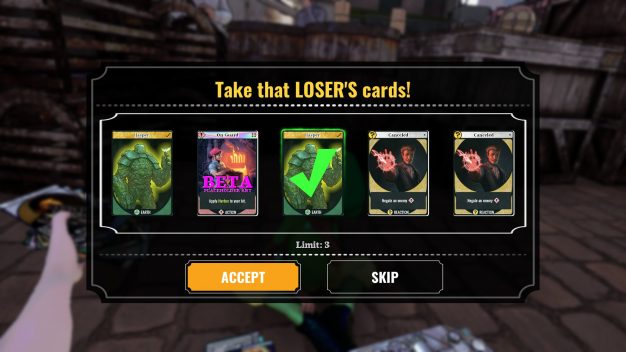 I love that you win cards from your opponents. So much more fun than just buying them.

In its current state Alchemical Inc. is very much a work in progress. A lot of the cards aren’t complete and you can tell this game still has a pretty long way to go. In saying this the core gameplay is fun and rewarding and graphically everything looks pretty cool. I’m definitely going to keep an eye on this one and watch it grow. Nowhere near enough card battlers follow a story or have enough RPG elements that make sense. If this one carries on the way that it is, it could definitely buck the trend and give us something fresh and interesting to play with. 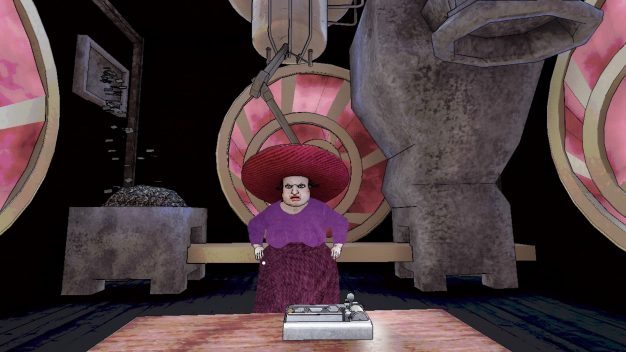 The Rat Queen. She’s your target if you want to feed your family.

If you want to see what I’m rambling on about for yourselves, you can grab the demo from Steam here. This game isn’t due for release for another year yet so there’s plenty more to be done until we get anything close to a finished article. This being said, if you like a good card battle and are looking for something a bit different this is a fun way to lose an hour of your time and get a feel for what the devs have in mind while you’re at it.