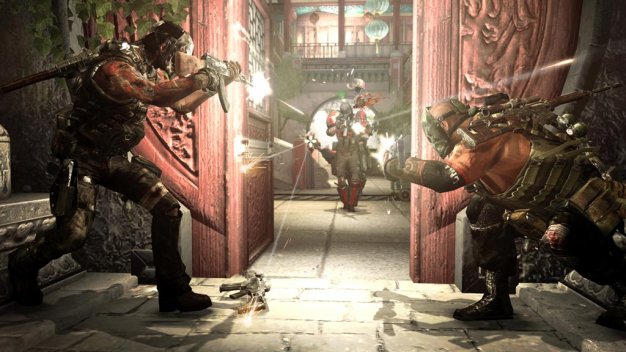 It was impossible not to be skeptical going into this one. Army of Two is still a relatively new franchise that has a lot of promise but still a lot to prove. It’s established itself as one of the stronger entries in the co-op multiplayer arena, taking on the likes of games like Gears of War or Left 4 Dead with a strong presence. Of course there would be a sequel, and of course there are high hopes that the tag team dynamics will be even better and get even more people excited, myself among them. But what doesn’t seem so obvious is that the sequel is packing in a pretty damned heavy dose of competitive multiplayer modes. Not content to just offer two friends some missions with a little dynamic combat, and not satisfied with the offerings in the first game, this one is coming loaded with ways to squash competition and triumph in ways only competitive multiplayer action can. The main difference here is you’re almost always heavily discouraged to go it alone. It raises my eyebrows to consider this game with those modes, and fortunate that EA Montreal was willing to give me a hefty chunk of time with most of what they have to offer us next month. I left pleasantly surprised, hoping more people give it a shake than I fear will.

The core of the multiplayer was to bring that co-op experience to the big arenas. The team wants you to work with a pal just like you would in their single-player campaign. Talking out strategies, checking each others’ six, and coming to trust and depend on each other are absolutely crucial. The difference, of course, is that instead of a 12 hour narrative being the drive, it’s now to have that first place spot at the end of a much more intense and unpredictable battle. Thus, every multiplayer mode we played linked you with a buddy. Co-op Deathmatch almost speaks for itself, pitting up to five duos against each other and seeing who rocks the most pairs of faces. Control gives a little more objective and makes the pairs fight for control points. Warzone, where teams will face several different objectives within one match, involves two teams of four, but pairs are still established within them. Extraction, the pre-order-only mode that is equal parts Horde from Gears of War 2 and the map progression found in a Left 4 Dead campaign, also has a similar setup with two pairs comprising a full team. 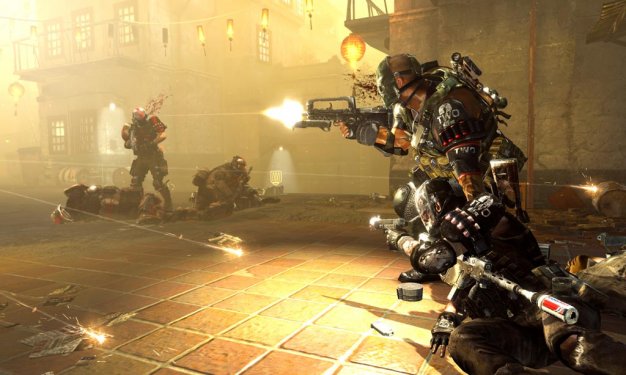 We started out with Team Deathmatch. The territory is very familiar for anyone who’s played any shooter with a multiplayer mode. You run about the map and the winner is the one who racks up the most kills. The kicker, of course, is that you’re not just you. You’ll have a pal with you. It was stressed that being in a pair isn’t required to play, but it actually is if you want to stand any semblance of a chance. Someone to watch your back is absolutely crucial, especially when the opposition is also more than likely a pair. No good being double teamed. Another integral factor is the gps system. It’s basically a visual overlay that will show you anything of importance that your partner can see. So if your partner’s got a clear view of a couple enemies, you’ll see their silhouette through walls. Also, you come to rely on your partner for supplies. You spawn with one grenade, but can run to your team mate and get two more out of his backpack. You’ll also be able to pull ammo out of there, and of course they can do likewise. A really smart team will do everything they can to take advantage of these, and they add a tactical level to deathmatch that is more than a little welcome.

Following that was a little time on Warzone, which had two teams of four going back and forth on different objectives. In one moment it was almost Counter-Strike-esque, where we had to escort some hostages from point A to point B. When we failed and watched our precious cargo get thoroughly blown away, it became a battle for control points. A number of other possibilities can also come up in a given game, all involving attack/defense of some familiar form or another. Again, the rub is the emphasis on cooperation with a partner, and again it pays off to learn and master it.

Then we put some time into Extraction, which will only be available to pre-ordered copies for the first 30 days. After that, it will be available at no extra charge to all the other owners of the game. This one has one team of four surviving waves of enemies like Gears 2’s Horde or Halo 3: ODST’s Firefight modes. On top of that, survival of a round moves you to the next part of the level, making it almost like a mini campaign of sorts, reminding me, again, of Left 4 Dead. There are sixteen rounds in total, and while we got to the twelfth round, it was interesting to hear the developers themselves had only managed to reach the eleventh. We felt more than a little proud. This mode probably got us using our partnership the least, and really looking to the group as a whole. It was all about finding the sweet spot in a level where we could suppress as many spawn points as possible. It was fun calling out for help or giving orders— er, I mean offering friendly suggestions— and putting a good effort toward working together and actually making it through. The one downside was that we easily broke the halfway mark, and with only four rounds left, it seems like this mode could run stale a little faster than the rest. There’s nothing too dynamic about it, so once you know it, you know it, and there won’t be much reason to go back. 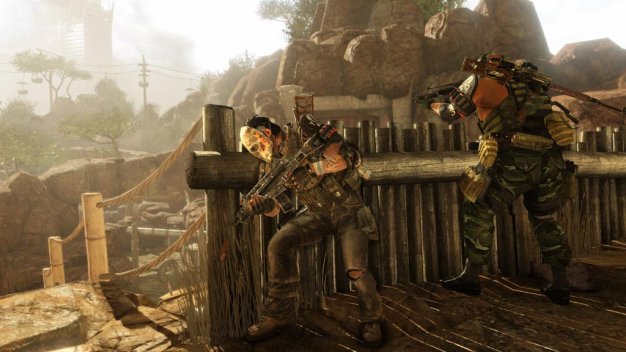 The game accomplishes its goal of cooperation. Teammates would learn who they were from across the large room we were in, and it didn’t take long before shouting ensued, and it was exactly the kind of shouting the folks at EA Montreal wanted to hear. Partners saying who would go in first, and who would do what. Telling each other where an enemy was and how to take them down or, hell, to get out before they’re sniped. Clearly, the team has done something right here.

To boot, there’s also the mask editor to throw in a little individuality and community engagement. Players will be able to log into the official Army of Two web site and submit their custom masks that they can then download and wear in the game. As an example, a little nationality was on display with access to a mask that had a big Montreal Canadiens logo. The community has already taken a shining to it, as there are already a whole bunch to choose from. If the game catches on, it will be neat to see the variety that players will encounter.

But I had my misgivings. The weapon loadouts are static. There was no means of customizing them, which may be a turnoff to the Modern Warfare fans. However, as a bit of a counterbalance, there were quite a few loadouts available. There is a good chance one’s choice loadout is already there, but the little things can count, so that’s a bit rough. Also, the game does require you create an ea.com account to play online. Metal Gear Online suffered criticism for making players have to create a Konami account in order to play due to the inconvenience. After all, shouldn’t a PSN or Xbox Live account be enough? It’s understandable when they are providing the custom masks, and it is an account that will work across all EA games. So that account you made for Dragon Age or Spore will work just fine in this game. Still… it feels like an extraneous step.

That said, I can’t deny that I really enjoyed playing these game modes. I was surprised at how quickly and easily I got into it. When our time was up and all the matches ended, I honestly felt like I had a few more rounds in me. I can wait a few weeks, I suppose. Until then I can peruse these masks and hope someone thinks like I do, but with drawing skills. That is to say I hope someone makes a mask that spells out “PLEASE AVOID SHOOTING THIS FACE IT IS FRAGILE THIS MASK WON’T STOP ALL THE BULLETS.”