Chaos Reborn, the sequel that Chaos players have been waiting nearly 30 years for, is finally out on Steam’s Early Access. For those not familiar with the tactical 1985 cult classic Chaos: The Battle of Wizards, gamers play as a powerful wizard that is locked in battle with other wizards of equal skill. Each wizard takes turns castings spells, summoning minions and equipping weapons in order to defeat their opponents and be the last wizard standing. 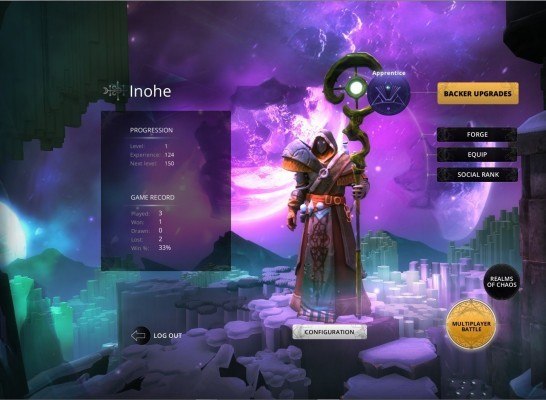 After players create their wizard (which entails simply giving them a name), they will see a screen similar to the one in the screenshot above. This screen is essentially your “home” screen. You can view your wizard’s stats, configure settings, participate in PVP and play the campaign rightly named “Realms of Chaos.”

There are three other options labeled as Forge, Equip, and Social Rank available to player as well. Forge allows you to craft new weapons and armor for your wizard. Equip lets you equip and swap out any items or gear you may have. Finally Social Rank is an objective based system that unlocks alternate game modes for players. In this build of the game however, the campaign mode, Forge, Equip and Social Rank were not available for me to experience. The only parts of the game that I was able to test were PVP and Player vs. AI matches. 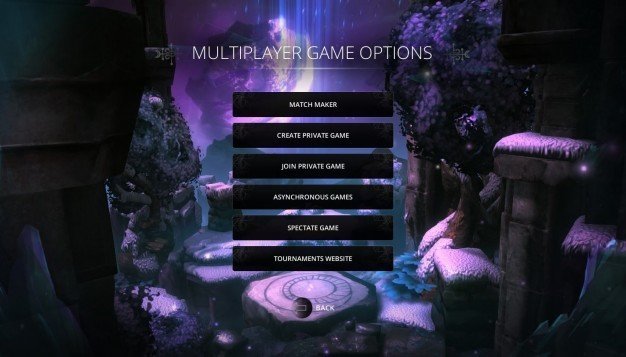 There are several multiplayer options in Chaos Reborn. Gamers can hop in Match Maker to find a match, host their own game, join a game, spectate a game already in progress and perhaps the most interesting of the group, Asynchronous Games. Asynchronous Games are matches you play on your own time. You hop into a game, make a move and then go do something else.  Maybe check and see if your opponent made a move the next night or several days later. It’s a fun and convenient way to experience the game on your own terms and schedule. PVP isn’t the only cool part of multiplayer: gamers can get with their friends and play in co-op matches against other wizards in 2v2 games. Or go against each other and others in a four player free-for-all. 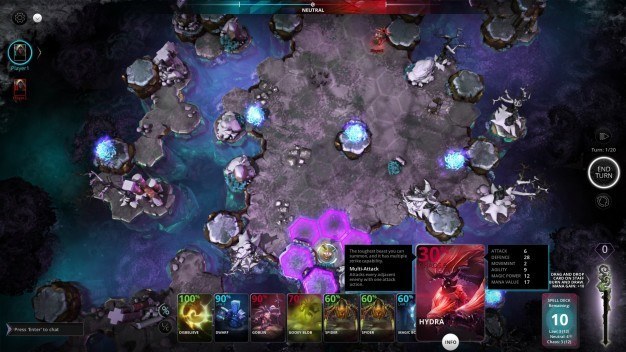 This is what a match looks like in game.

Chaos Reborn features very vibrant and attractive graphics. Gamers play on a traditional hexagonal field and have a limited number of options they can perform each turn. As a tactics fan, it felt immediately familiar and the controls were simple and easy to understand. You essentially click on each piece you control on the field and move them where they can go and have them attack what they’re near. Your spells are represented by the cards at the bottom of the screen in the image above. By mousing over them you can see their stats and functions before you summon/cast them.

An interesting part of combat in Chaos Reborn is the fact that spells do not have a guaranteed chance of success. Based on the spells used, wizards have an easier chance using magic that the battlefield is attuned to. If more wizards have cast Law magic, then Law spells will be easier to cast. In contrast, if more Chaos magic has been used, Chaos spells will be more easily cast. There are also neutral cards which have the same rate of summoning regardless of the current state of the battle field. Another cool feature of combat is that you can spend mana that you gain while in combat, and by discarding cards to increase your spell’s likelihood of success. Those two features right there are what makes Chaos Reborn‘s battle system so exciting. 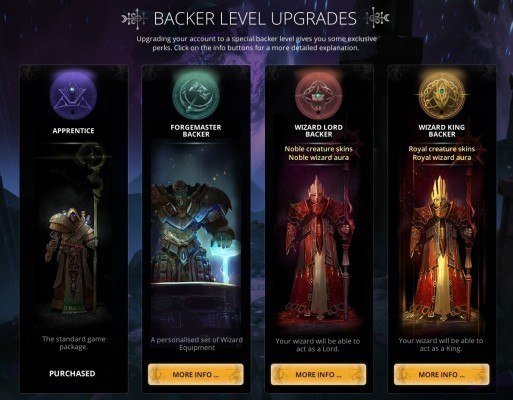 These are the different Backer upgrade titles players can receive should they choose to support.

My only issue with combat is that once your wizard is hit even once, you’re dead. Granted, chance to hit percentages are obscenely low, one shot could still do it. This is true for minions as well. Unless you managed to cast a shield spell on your character, if something does manage to hit you, even once, GGWP.

Players that are excited about this game and want to support its development further can choose to upgrade their account to “Backer” status. Backers get a multitude of benefits, ranging from social titles such as “Wizard Lord” and “Wizard King” to in-game skins for different minions summoned. Even though the Kickstarter campaign has ended, it is still very easy to upgrade your account and enjoy all the perks Chaos Reborn has to offer. The one’s I mentioned are just the tip of the ice berg, once the full game launches, Backers will have access to items, auras, rankings and more that Non-Backers will have to work hard towards or may simply not be able to get in general. It’s not pay-to-win. It’s pay-to-save-yourself-a-countless-amount-of-time-and-see-what-all-the-game-has-to-offer-much-more-quickly. Sometimes, it really is good to be king. 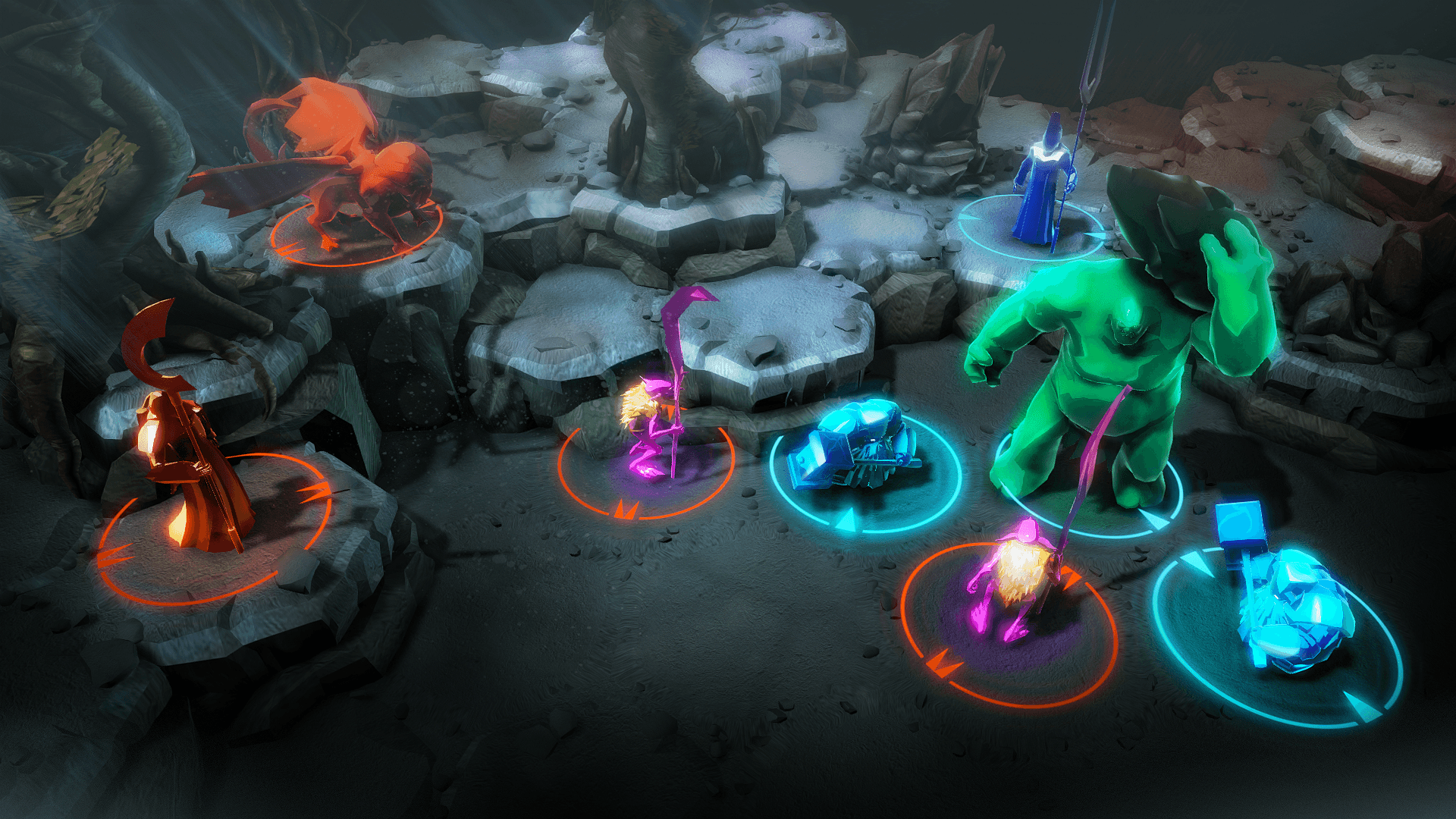 Did I mention this game was designed by the original creator of X-COM, Julian Gollop? If I didn’t, it totally is. How awesome is that? Chaos Reborn is in good hands and despite not having all of its modes unlocked, it was still a treat to play and experience. To learn more about Chaos Reborn, check out the online game guide and support it, visit it’s official website. If you liked what you read (or saw online) pick it up on Steam’s Early Access today for only $19.99.