Another day, another roguelike? Even 8+ years after the genre started to hit the mainstream with titles like Rogue Legacy and Spelunky, roguelikes remain incredibly popular. That popularity is certainly helped by games like Hades as well, but for every Hades, you get a lot of indie games that just do the same thing as every other roguelike. That’s where developer Arrowfist Games comes in, or at least, wants to come in. Currently available in early access, Deflector is meant to inject something new into the space, and while it certainly succeeds, there may still be a few things to work out. 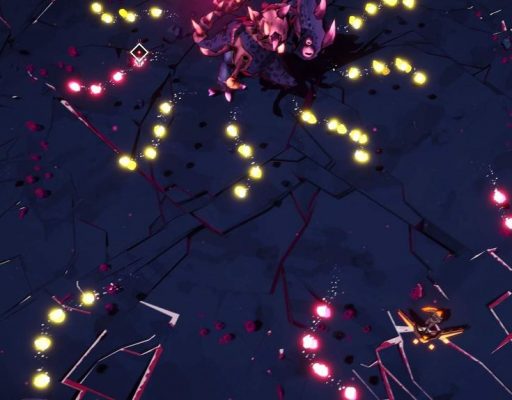 There’s virtually no story here, which is fine for a game like this, but not ideal. From what I can gather, the main player character is a microscopic organism created by mixing DNA, and the game is meant to test its capabilities. This translates into pretty familiar roguelike mechanics. The player chooses between split paths on a map, with each map marker representing a battle, a store for upgrades, or a rest point. Some battle rooms are harder than others, but those grant upgrades to make your character stronger for the current run. Once you die, you lose those upgrades, but you get points throughout the game that let you add new upgrades for future runs and give your character permanent abilities. While I don’t play a lot of roguelikes, this seems like a pretty simple formula to me. 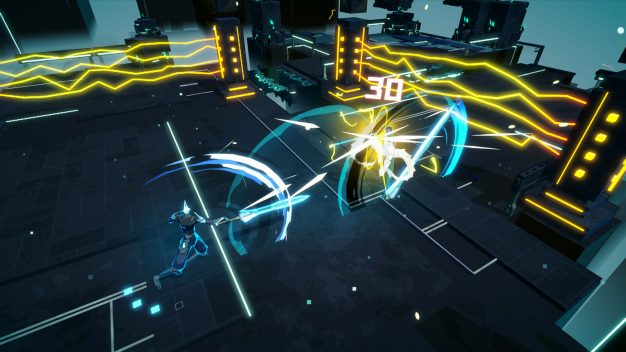 It’s the battles where the real innovation takes place, though. Combat feels like a mix between Hades and a bullet hell twin-stick shooter. Using the left stick to move and the right stick to aim, you throw your main weapon (a boomerang) at enemies. But you can’t just focus on that, because you also need to deflect enemy projectiles, ideally back at the enemy. The deflecting is a key part of the design, hence the name Deflector. Not only can you deflect enemy bullets (and you’ll do plenty of damage there), you can also deflect your own boomerang to give it some extra oomph. This all takes a while to get used to, and I’m not sure I ever fully did, but it gets easier as you go. That is, controlling it gets easier; the fights are anything but easy. That’s to be expected, but still worth mentioning. Still, when you do get used to attacking and deflecting, it’s quite fun.

Unfortunately, though, the core gameplay isn’t the only thing we’re looking at. I know I’m not the first person to say this about Deflector, but in its current early access state at least, fighting harder enemies in order to get upgrades doesn’t always feel worthwhile. Most of the upgrades are relatively minor, and don’t make up for the amount of health you lose in these harder battles. There are healing rooms throughout, but they only do so much, and the bosses will take a chunk out of you for sure. The upgrades still have some worth if you get them other ways, though. At first that isn’t so easy, but between runs you can use one of the currencies you’ve earned to unlock permanent upgrades that let you start with an upgrade right away or give you more starting money to get one from a shop. They still don’t do a ton, but it’s better to have them than not. 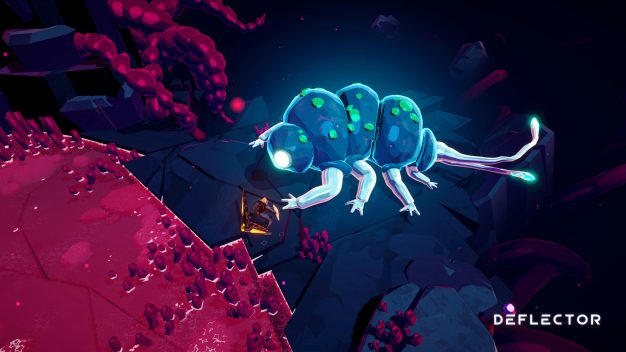 The visuals are a double-edged sword as well. On one hand, I really like the neon visual style; it may not be totally fitting for this microscopic world, but it’s probably better than that would be. The bright colors of the characters and objects of interest really stand out against the darker backgrounds, making the setting look like a more colorful version of “Tron”. The downside though is that details are sparse, and it makes traveling through each “world” visually boring. The rooms all blend together, and the cool visuals aren’t enough to spice it up. It shouldn’t be that big a deal for something like Deflector, but it stood out to me because it makes it feel more like a run-of-the-mill indie and less like the unique special game it could be.

Before concluding, I’ll remind you that Deflector is still in early access. While the current build apparently runs better than the one before, the game still freezes up sometimes. It’s only temporary, and it’s the only glitch I’ve run into so far, but it is possible there are more harmful glitches still present. It’s not entirely clear, with how far I was able to get, whether this build has multiple playable characters, but I’m pretty sure the final version will.. Some instructions seem to be missing from the tutorial (I was several runs in beforeI learned I could use the right stick to aim), and the post-run upgrades aren’t totally clear. I assume that these issues, and possibly some of the critiques I noted, will be fixed in the final release. Deflector is, as far as I can tell, pretty unique given its main mechanic. Between bringing something new to the table mechanically and having visuals that stand out from the crowd (even if it isn’t as much as it could be), it’s the kind of game that I’m happy to support. It may not be the best thing I’ve ever played, but I certainly enjoyed it, and I don’t usually like roguelikes. If you’re itching to play one though, and you want to support the creators, it’s worth picking up in early access. For everyone else, though, I recommend waiting for the full release.