The Hand of Merlin is a turn-based tactical rogue-lite RPG currently in early access on Steam from Room-C Games and Croteam (with Versus Evil publishing). Based on Arthurian legend, you take control of a small squad of warriors who are hand picked by Merlin to save the world from an evil corruption. While there are larger story components as you journey from Albion to Jerusalem, much of the details of your tale are revealed as you move around the map, creating a ‘choose your own adventure’ story along the way. 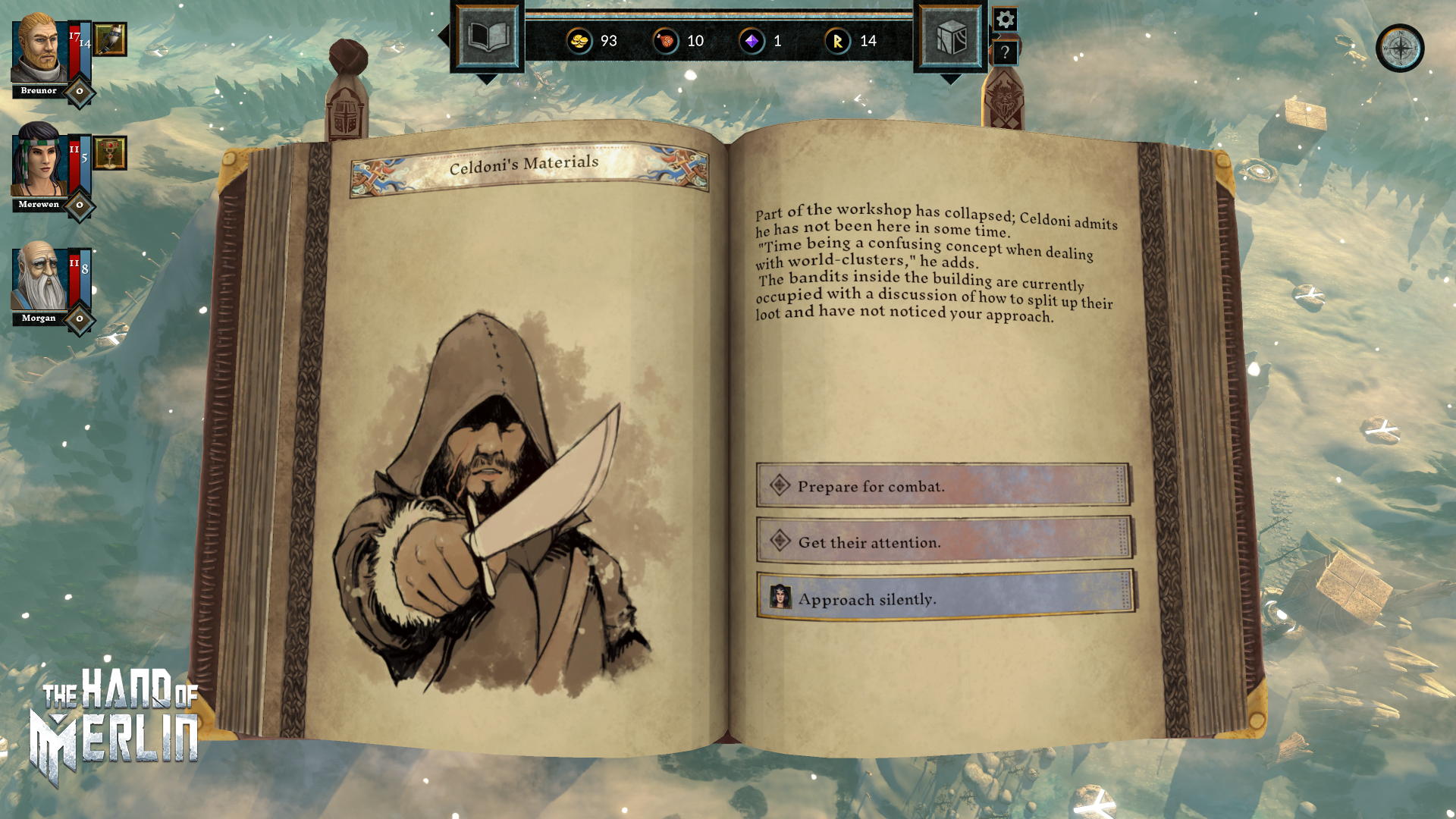 The game was written by Jonas Kyratzes (The Talos Principle, Serious Sam 4) and Verena Kyratzes (The Lands of Dream, Serious Sam 4). The writers and developers are emphasizing the unique way that they have tied in sci-fi elements into the story that aren’t associated with Arthurian Legend in the slightest. Overall, it’s an interesting take on a story that could have played out as your standard medieval fantasy fare.

After watching the opening cut scenes and selecting my 3 heroes, I set off on my quest. Character selection is nonexistent at first, as you will need to unlock characters (up to 6) through progression. You can easily balance out the party from the classes available: Warrior, Ranger, and Sorcerer. These classes do what you’d expect. My personal favorite is the Ranger class, who offers a good mix of skills to control the battlefield from a distance. You could totally do a run a with all Warriors if you really wanted to, but I can’t imagine you would get too far! 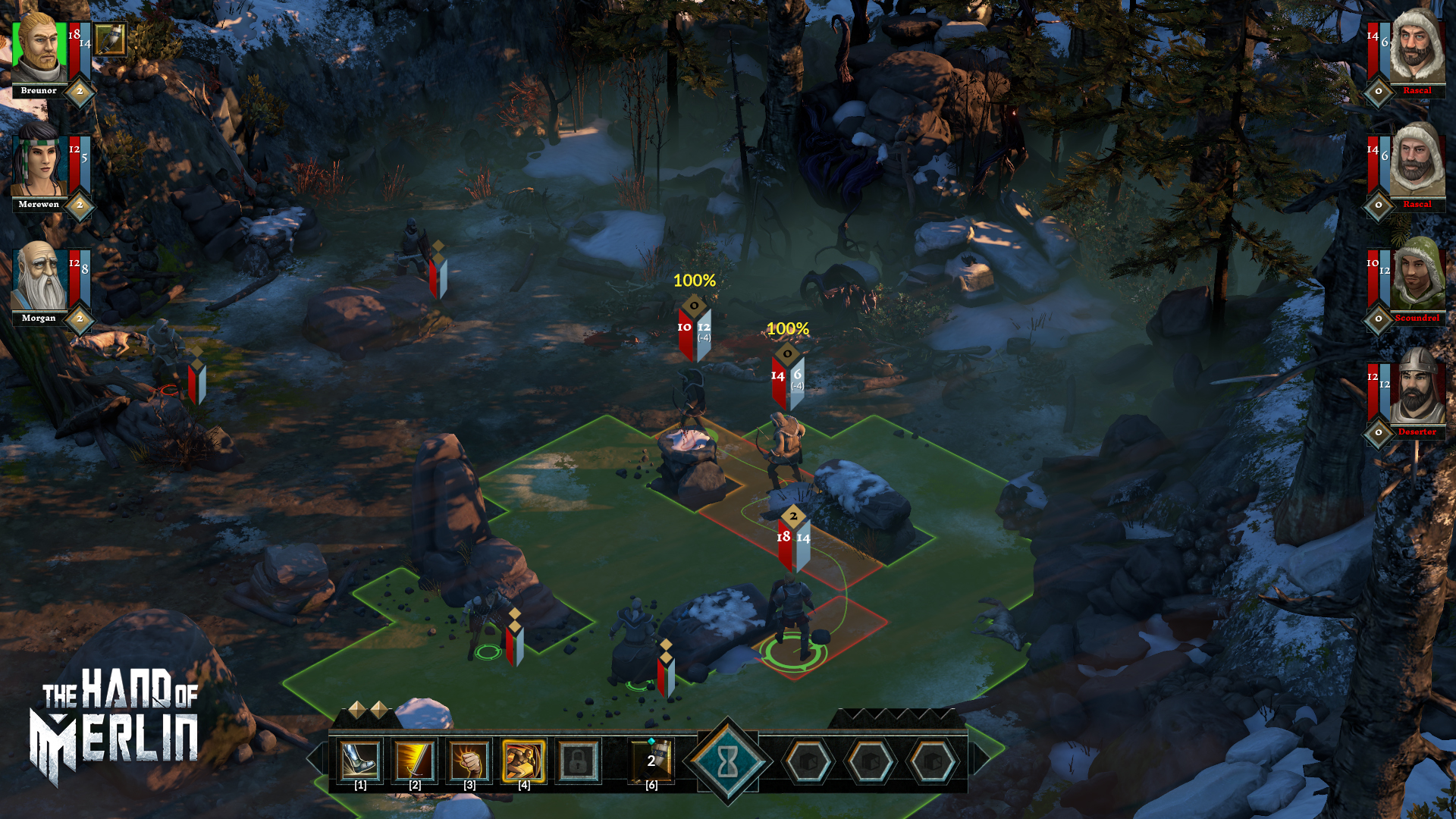 Once you select your characters, you make some final decisions that impact perks and then set off on your quest. The regional maps in The Hand of Merlin have a good number of nodes to traverse. Nodes can be a town, an encounter, a ruin, or a random story element that will test your decision making. Some nodes are corrupted and will likely spawn an encounter. The tone was set immediately for me when my first node was help and old man get back to town, and he robbed me in the middle of the night and escaped.

The world is pretty unforgiving, but there is some good that still exists if you can uncover it. You have a pool of resources that tag along with you, like gold, food, and renown. Food is consumed when you move along the nodes and if you run out, you’ll start incurring health penalties. Gold helps you buy stuff, like weapons, relics (ie, gear that provides passive or active spells/perks), and the aforementioned food. You buy items and heal in towns. 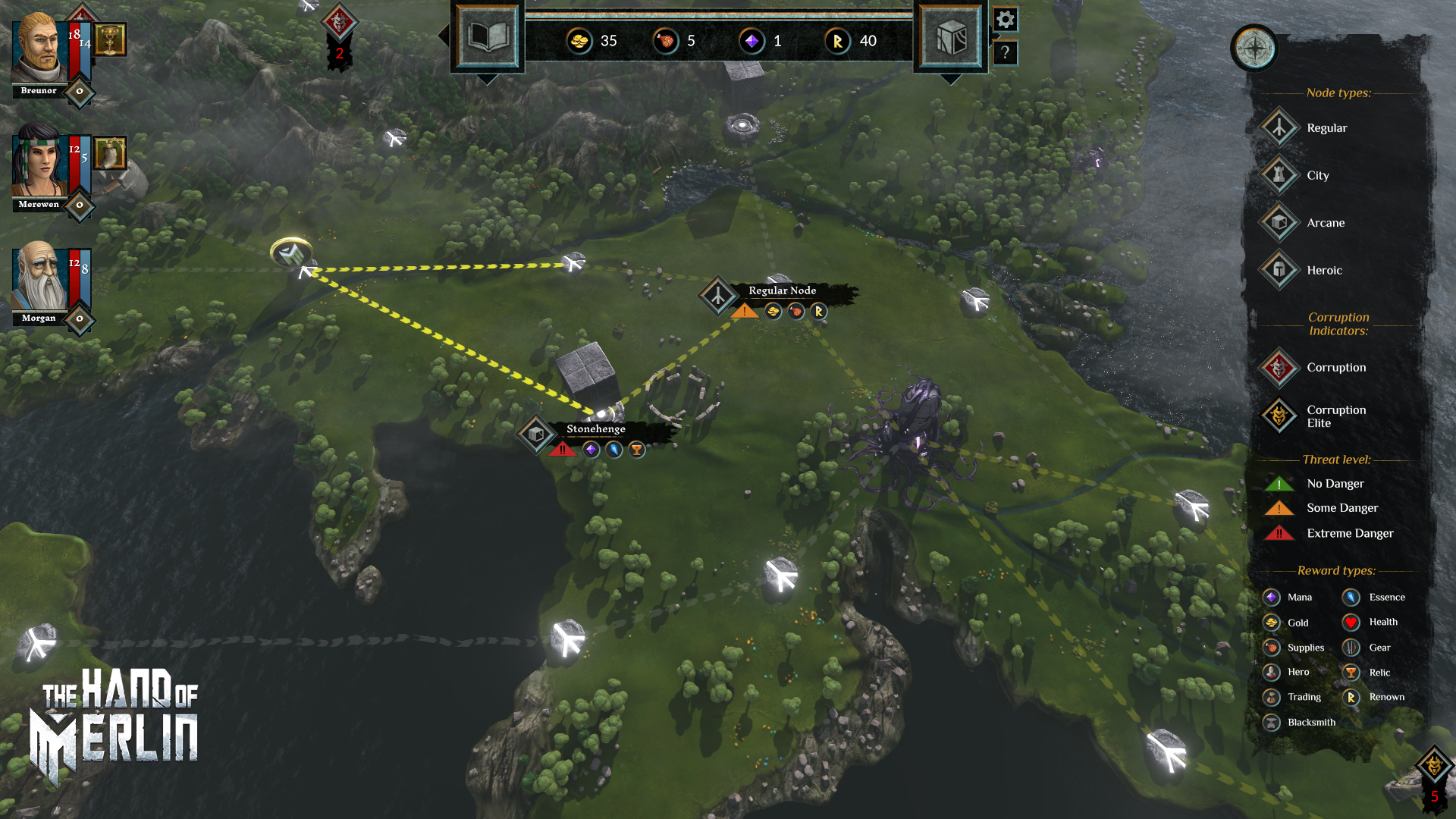 The movement around the map provides excellent pacing. There is a good mix of fights, story elements, and towns to progress through as you work your way towards the final encounter in the region. I also could come and go as I pleased, dipping into the game for a short time then backing out that can naturally occur with each turn.

Encounters move at a decent pace for the most part, but minimizing damage in roguelike games usually requires some extra rounds of resource management (eg, I’ll heal the next round, then pursue the last fleeing enemy). Encounters in The Hand of Merlin feel like most tactical RPGs: each character has action points to consume each turn, either by movement, combat, or spells. Enemies have armor points you’ll need to break through first in order to do damage to their health (same goes for your characters). Characters can move to cover to help mitigate damage from ranged attacks. 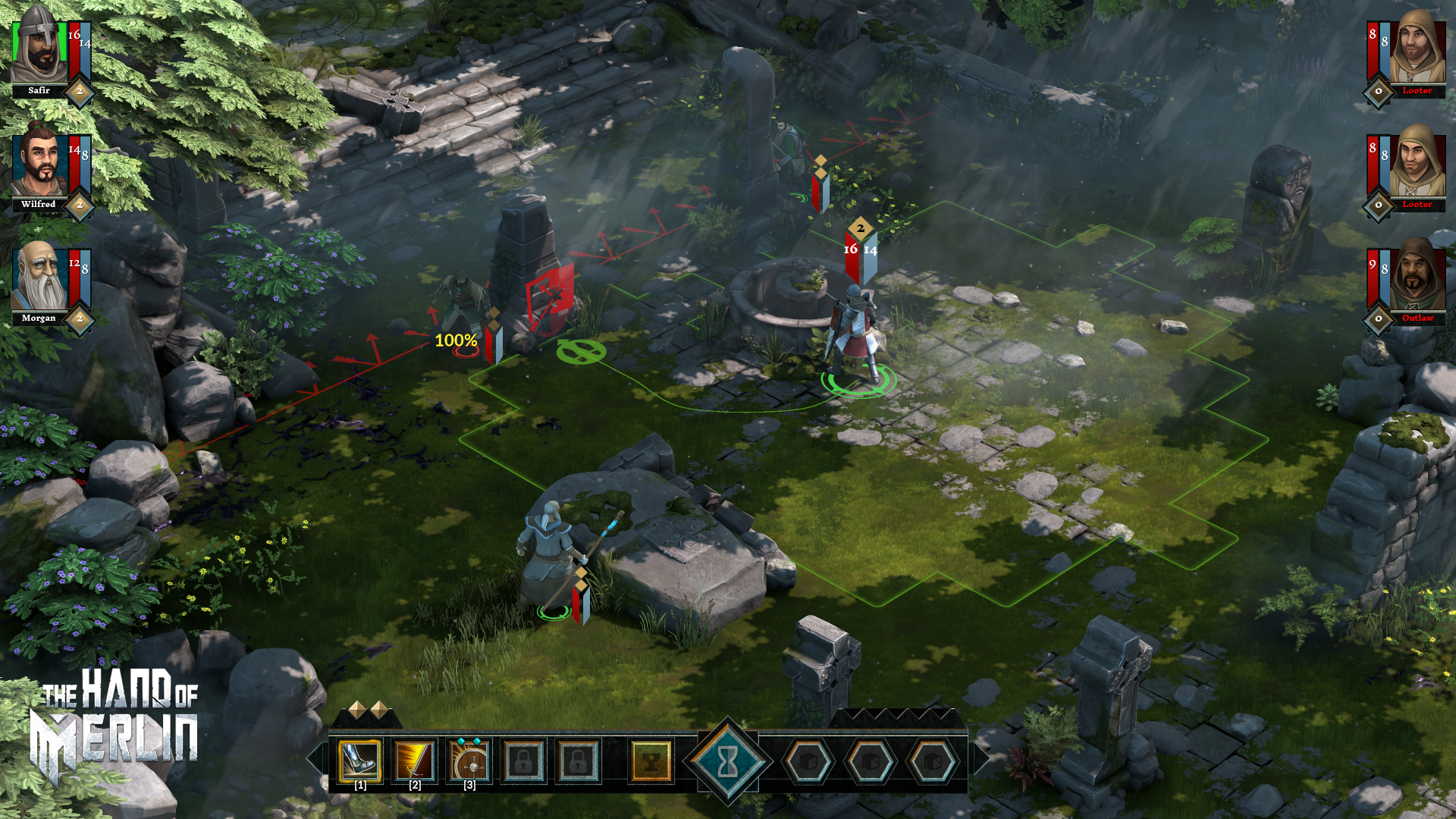 Your warrior will rely on close-quarter combat, rangers will attack from afar, and mystics can mix attacks with healing and buffs. I hit my stride pretty early on the best mix of offense and defense, and as you gain renown, you can level up and gain new abilities. These can unlock some choice abilities that really help as the enemies get tougher and/or increase in number. Some of spells and abilities have charges and/or cooldown, so smart utilization is key.

Since this is a roguelike, your characters are subject to permadeath. I struggle with this genre to an extent because I personally dislike losing progress. Losing one character spells disaster for the entire team because you likely won’t last much longer with the smaller party. Hopefully you will have unlocked a new hero to try out on the next run. You might also unlock more of Merlin’s Spirit, which grants you powerful spells you can use in a bind. They come at great cost, so they should be used wisely! 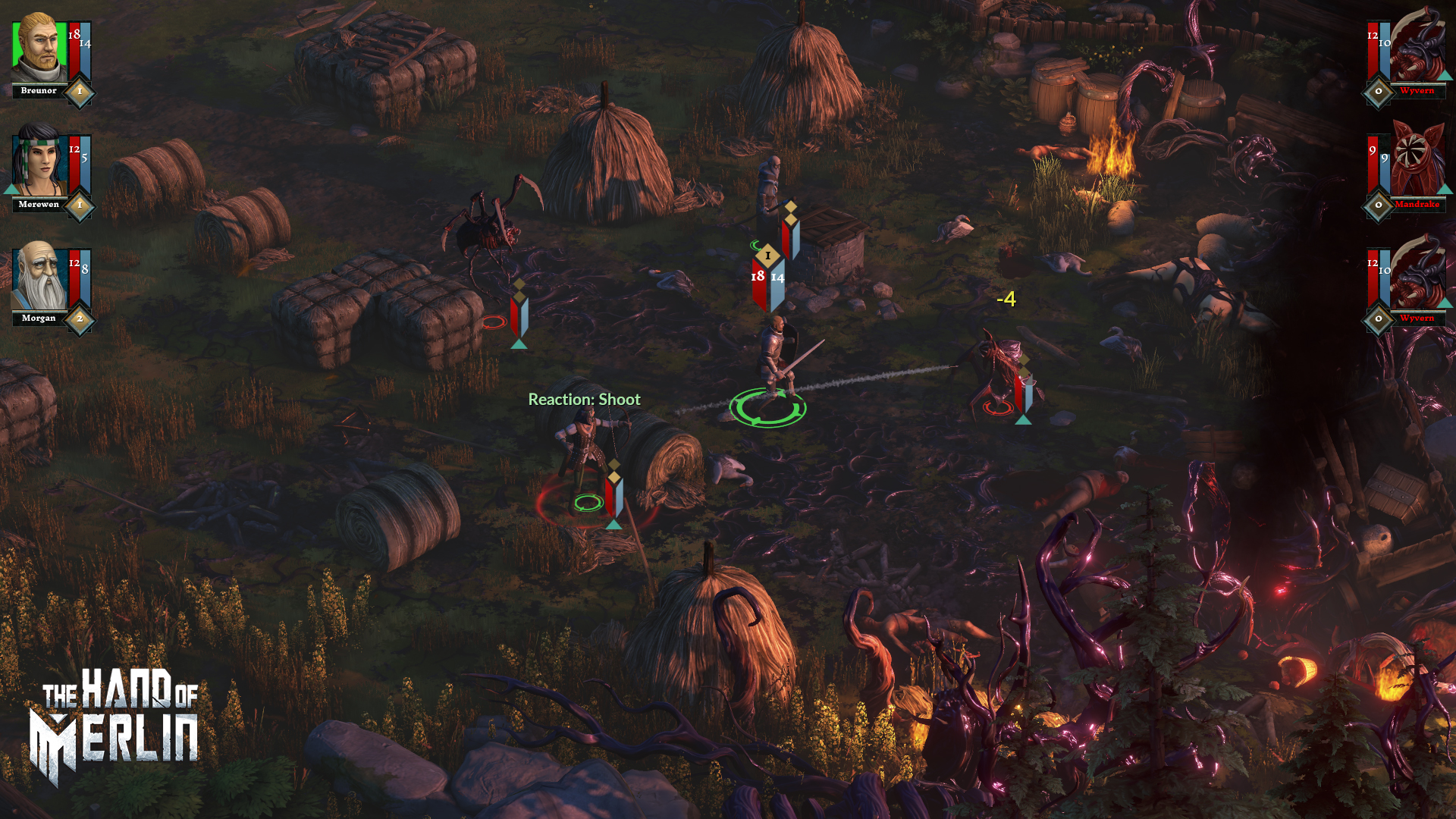 Graphically, The Hand of Merlin has a 2D storybook aesthetic mixed with the 3D world that works for the most part, but I would almost prefer the character art have more realism, like you might find in Pillars of Eternity/Baldur’s Gate. Either way, it isn’t a deal-breaker. The map and UI are clean. One area for improvement is in the combat screen. I ran into issues with mis-clicks where I was trying to attack an enemy and ended up clicking a part that wasn’t the enemy “hitbox” and just started walking to a grid right behind them. This can spell disaster in the later game when you’re pushing the limits of your party. There are definitely some legibility issues with on-screen effects and the colors blending in with some of the environments. These are hopefully easy improvement that the developers can make in the short term.

VERDICT
All in all, I think The Hand of Merlin is a fine offering into the realm of turn-based tactical rogue-lite RPGs. Seeing as this was an Early Access game, it was surprisingly pretty polished. I’ll be interested to see how the developers continue updating this as it moves toward full release. If you are one who likes to get in on the ground floor and this sounds like the game for you, by all means jump in now.

This preview is based on an early release copy of the game provided by the publisher.
Related Posts:
YOU MIGHT ALSO LIKE: