I remember when the vertical scrolling shooter was one of the most beloved genres out there. This was the sort of thing that you threw your money at in the arcades back in the day. There are so many brilliant games to choose from to use as examples but 1942, Galaga, and Ikari Warriors are just three that spring to mind. This genre has morphed a little bit over the years into what we now know as the Bullet Hell genre, though this is a looser term that can define a bunch of different shooting styles. It just goes to show, though, that something as popular as the arcade shooter wasn’t going down without a fight. A new entry into the genre has just appeared on your PC screens and I was lucky enough to get a chance to play before you lot got your mitts on it. The question remains as to whether SHINORUBI is really hitting the mark. Well let’s find out, shall we?

The biggest problem that the vertical shooting genre suffers from is its adherence to the arcade format. You have to remember that these weren’t really story-driven games. They were score attacks designed to make you pump as much of your hard-earned cash into your favorite game cabinet to get those big leaderboard placements. The real problem here is that these games weren’t designed to be particularly long. They could be fairly short but were made deliberately more difficult to ensure repeated deaths and, therefore, more money in the pockets of the arcade.

The above can be completely forgiven with reboots of old arcade games. You don’t want them to change your title too much so a true recreation with a few more modes to play about with is generally enough to satisfy your appetite. The problem comes when brand new games are mimicking that style. These games aren’t necessarily being forced to play by the same rules and that means more can be done with the finished article. This is the problem I’m finding with SHINORUBI. 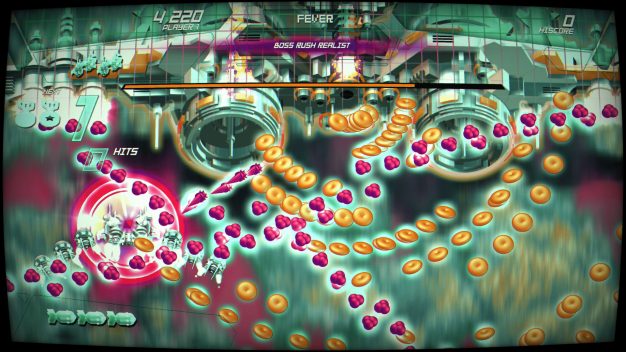 The boss battles are blisteringly difficult

SHINORUBI is an arcade shooter and very true to that format. The thing is, that it’s a PC game first and foremost. This being said I’d really have liked to have seen a few things that aren’t there in the game’s current state. Firstly, this isn’t a game that’s particularly long. At 5 stages I was able to complete it on very easy and easy modes in under an hour. I’ve gone back and restarted on harder difficulties but the overall length of the game isn’t altered in any way, you just have more thrown at you.

I don’t play games like this for the scores, I’m much more interested in the ride and there wasn’t enough there to make for a really engrossing time; for me at least. What I would have loved to have seen would have been five worlds broken into sub-levels. This would still be ample for arcade fans but also play well to those of us looking for a decently lengthy experience. In addition to this having different worlds or zones would have allowed for more variety in enemy types, something I felt was missing. 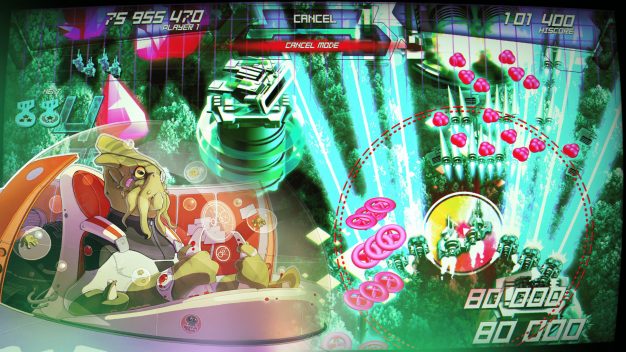 SHINORUBI will be coming with a whole roster of pilots.

The entire game didn’t offer enough of a difference between levels in the types of enemy ships being faced. Again, this is a totally personal thing but when I move to a new zone I want to see a completely new array of enemies with a new challenge being presented. You get some new enemy forces to blow to bits but there’s a lot carrying over, both in ship design and in the turrets that are dotted about the place. As I’ve just mentioned, if these were five zones in a single level I’d be all for it but because this is encompassing the whole game I think that more could have been done.

There is zero story in SHINORUBI’s current state. You’re thrown into the fight with absolutely no idea why you’re there. You can choose from different pilots, (I’ll come to these in a minute,) who appear to be different species of aliens. This is fine if you tell us why they’re there and give them a back story. Otherwise, you might as well just have a generic pilot and different ship classes, which in this case I feel would have made more sense. This brings me to my next point in that there is no upgrade system in the game. Each ship has its own main weapon and bomb and that’s it. You don’t get pickups being dropped that power or change your weapon so the majority of the game is just spent flying about frantically with your finger on one button. These ships have different stats but I didn’t really notice this when I was in the thick of it. 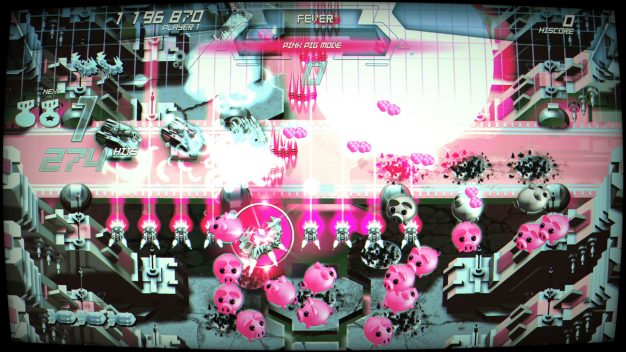 Yes, those are pigs, no they’re not in the ordinary game.

There are a series of pilots to be added beyond the ones playable in the current build. Each has its own ship design with its own weapon makeup. I played through with all three of the starter pilots and while they were different they didn’t feel different enough for me to choose a favorite. The rest of the pilots, when added, may bring ships with wildly different play styles so I might find an absolute winner later down the line but for now, the ships look gorgeous but there’s not much in it when it comes to variation.

Right, enough complaining. What does SHINORUBI do well? Aside from everything I’ve just said, this is a damn good arcade blaster. It’s fast-paced, colorful, and perfectly in keeping with being a bullet hell, it’s hair-raisingly difficult. By the time you get to medium difficulty so much is being thrown at you, you’ll need to have some serious skill to get through intact. This is what SHINORUBI is really designed for. This game has been made for flashy runs by players who can power through a hail of bullets and just keep racking up massive scores. By the time these complete masochists are playing on the hard difficulties, 5 levels will probably feel like plenty for them to get their kicks. 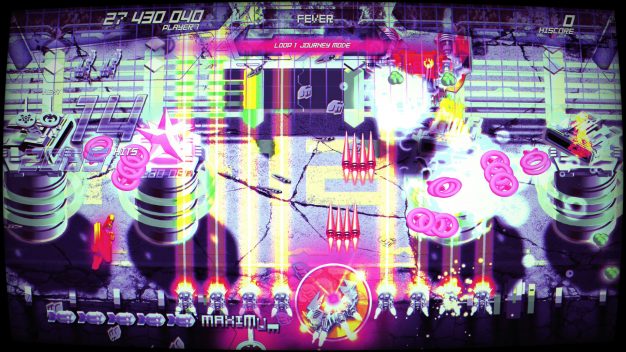 For those of us who don’t really care about scores and just want to see what’s next, there isn’t really enough there to keep coming back to. Your score resets at each continue but if this doesn’t particularly bother you you’ll just carry on until you die again and so on until you get bored being shot up or you complete the game. You have a series of arrange modes, (with more being added,) that add certain prerequisites to the game and therefore increase the overall lifespan, boss rush modes too, but I’m not sure that’s enough in the long term to keep a wider audience hooked.

SHINORUBI is going to be a hit or a miss depending on the sort of player playing the game. If you’re looking for longevity, a decent amount of story, and a good bit of depth in your game you’ll probably complete this until it gets too hard and then move on. If you’re an arcade fanatic that loves big scores and won’t rest until you’ve completed the entire game on one set of lives, on the most difficult setting, (because clearly, you hate yourself that much,) then this is the game for you. I’m in the first camp over the latter. I can see why SHINORUBI is fun and absolutely see what it does well but it probably isn’t for me as a long-term investment. This title is nearly £20.00 so the value for money isn’t quite there either for the overall amount of time I feel that many gamers are going to spend with this title. 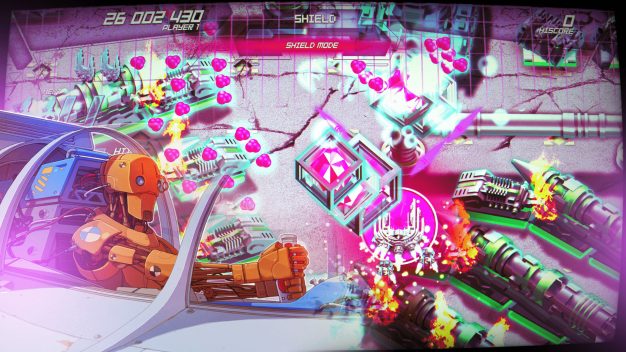 As a final point, SHINORUBI isn’t a finished article and has tons of room to grow and I genuinely think more can and will be done with it. The essence of a very good game is there, I just don’t think it’s quite at the stage it needs to be to appeal to every shooter fan out there just yet. If you’re an arcade nut looking for a new blisteringly hard challenge I’d recommend giving this a go, I think you’ll have lots of fun. For the rest of us, maybe wait and see what the finished article is looking like before indulging.

This preview is based on an Early Access copy of the game provided by the publisher.