I absolutely love a good shooter. When these games are done right they can make for some really frantic fun, they also tend to be found in the bullet hell category of gaming so they tend to be fiendishly difficult. Whenever I see a new entry to the genre pop up on the market I usually want to give it a go and see if it’s going into my favorites box. In the case of Smith and Winston, the game we’ll be previewing today I have some really mixed views and I’m obviously going to be telling you why.

Smith and Winston is a game that should be right up my alley. This particular shooter is going for a really retro, pixelated vibe and that’s something I’m instantly down with. Secondly the environment is completely destructible and for this type of game that’s a plus; so another tick there. Lastly the game is exploratory and full of humor. What’s not to love right? Well this is currently, (remember the game isn’t finished yet,) a case of a brilliant idea with slightly off execution.

As always let’s start with what this game is doing right. To begin with there is a definite nod to retro gaming in Smith and Winston. The blocky, pixellated look this title is going for is very reminiscent of a lot of games I played in my youth and I always love a bit of a trip down memory lane. As for the controls, everything felt smooth and easy to navigate on my gamepad. This was hampered by something I’ll mention shortly but the actually button-mapping and everything was fine. The music is also pacey and has a retro vibe to it which is very fitting. So look and feel wise, we’re definitely winning from the off. 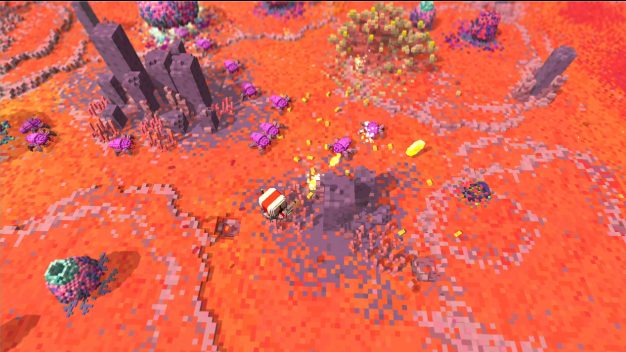 There is a certain amount of humor present in Smith and Winston and your ship – named Shippy, naturally – is the source of a lot of this. She’s funny and her lines are well written but her voice gets really annoying after a bit. I completely get trying to make an AI sound robotic but what we have here is something more akin to a dodgy answering machine message. You know that hideous put together voice you get when someone accidentally texts your landline? Yeah it’s like that. I can’t work out whether this has been done for comic effect or not. It’s also the only voice I’ve come across in the game thus far so I’ve got nothing to compare it to. On account of this the jury is kind of out for me on this one.

The biggest problem with Smith and Winston, for me at least, is that it doesn’t quite feel like it knows what it wants to be. In the arcade mode, currently the only mode present, you crash land on a world of floating islands connected by a series of strange portals. It’s also happens to be full of hostile beasties wanting to end you. So this is the perfect basis for an exploration/action game. The issue is that any one of those beasties can kill you with a single hit and you only get three lives per run. This ramps up the difficulty to a point where exploration feels like something that would be fun if only you weren’t dying all the time. To add to this the enemies respawn every time you die. I totally get this happening if you’re using a continue but each time you lose a life is just frustrating. 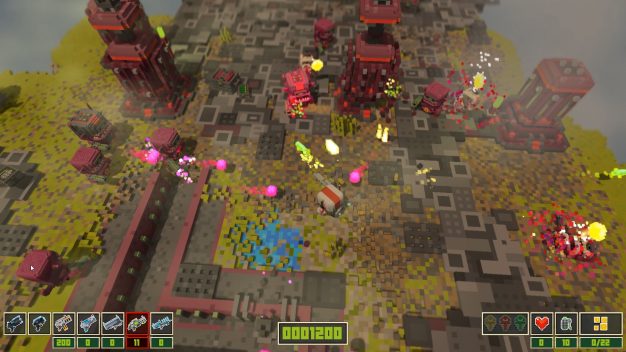 On the subject of enemies … I clicked on a button for “beta test.” This let me have a bit of fun blasting a boss to bits. Oddly, the boss wasn’t actually that difficult, however, to get to him you needed to hit some switches. These switches were obviously guarded and I got ganked a bunch of times by minions before I even really started the battle. This wouldn’t normally bother me but for the respawning I’ve just mentioned. I love a good boss battle so this was actually something really nice to find.

On the subject of exploration. There are lots of little sub-islands and other areas that you are ported to as you progress on your journey. This is great for collectible hunters and some of these areas have mini-puzzles waiting for you which adds a degree of variety. There are quite a few collectables scattered about that you get to keep between games so for players that want to see everything this is definitely a plus and something the game is doing well. 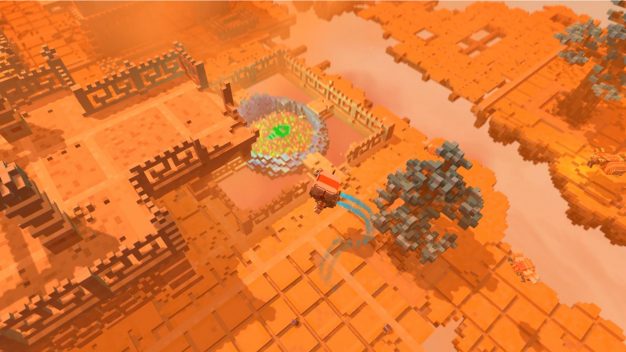 As previously mentioned this is a game of destructible environments and, again, this is great in essence. This issue here is that this doesn’t seem to serve any huge purpose at the game’s current stage. Granted, there are objects hidden in walls and certain portals are masked by blocks but it doesn’t feel like an integral part of the game yet. If this is a core mechanic (which it is), you shouldn’t be able to progress without mastering it and it should feel like part of the fabric of everything you’re doing.

If it purely comes down to shooting a wall to find a door or pick something up it stops being a totally necessary part of the game. This may be simplifying things a wee bit but I did spend a lot of time thinking, “why am I bothering shooting random trees?” If you’re wondering why you’re bothering doing anything in a game then there is something amiss. 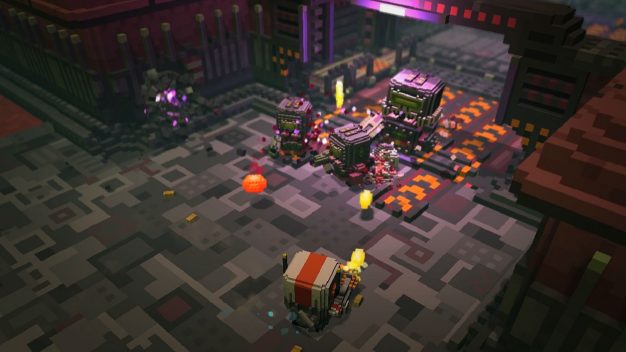 The biggest problem for me currently, and this is something I expect to be remedied, is the frame rate drops. You go from feeling like you’re wading through mud and firing at the speed of a geriatric snail to running around like an idiot. As this isn’t just you, it’s every projectile being fired by everything trying to kill you. You never quite know where you stand. Bullets go from being fairly easy to dodge to rocketing  towards your face and back again in seconds. This does nothing for the experience. I’m not going too hard on this for two reasons. The first is that as I’ve mentioned it could be something they’re already working on fixing, alternatively it could just be my computer and that’s nobodies fault.

I’d love to tell you I got miles into the game but it decided to forget I had a save file and pushed me right back to the beginning. I have to admit for reasons mentioned I wasn’t screaming to start over and get back to the point I left off so after another shortish go I put my pad down and pen to paper so to speak. One thing I will say is that I found a bunch of stuff I’d missed the first time round on my second go and this is brilliant. 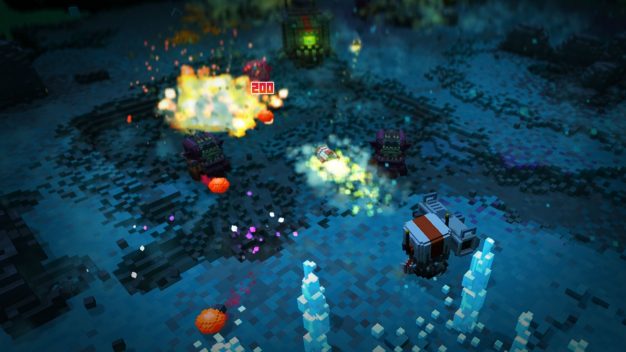 For now too much of Smith and Winston is unknown and I think this comes down to the current lack of a story mode being present. Personally it would have made sense to me to get this out first so we could see what difference the Arcade mode brought us later. Although the game is definitely there, there isn’t currently enough glueing everything together to make it feel truly playable. This totally comes back to it’s unfinished nature. I think it’s worth saying that there is definitely promise here but until the lag is balanced and a proper story built it’s a game that’s fun to play about in as opposed to being a game that’s fun to play. It’ll be interesting to see what happens as everything is completed and Smith and Winston comes to launch. For now, there is still a lot of work to be done, I feel, before everything is good to go.