Every now and again you just fancy doing something completely different. If filling a floaty, colorful world with sentient talking blocks sounds different enough then I might just have the game for you! The title we’ll be talking about today is Togges and in the least offensive possible way; it’s … odd.

In Togges you’ll be taking control of what is essentially a sort of vacuum cleaner called a Toomba. The king of the Togges wants to conquer the universe. It’s okay though because he wants to do it in a good way. The void is happily eating everything and the only way to save the universe is to populate it with Togges. The fact that these living cubes also happen to be his subjects has nothing to do with it of course. They’re just very useful and not dominating everything around them with their presence; obviously. 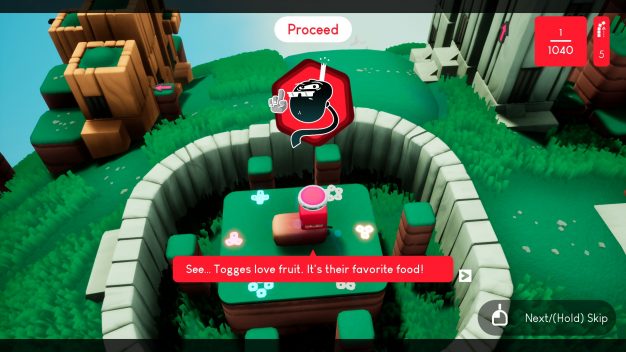 You can branch out in any direction. It’s up to you where you go.

Togges plays out a little bit like Pikmin when we look at the mechanics. You’ll have to control a number of blocks, (I can only say Togges so many times in a small space of writing, yes I’ve just done it again,) and use them to solve puzzles. Interestingly, you can only move around the map by joining these colorful characters together. You move between stationary anchoring points called Star Togges and when you reach them you can go and hoover up the Togges you’ve placed and then move onwards. You’ll build upwards with them too. The aim is to solve a variety of puzzles and objectives and slowly but surely conquer the map. You can’t just drop things anywhere though. You have a limit to the number of blocks you can place in any one go so it pays to be focused on what you’re doing. 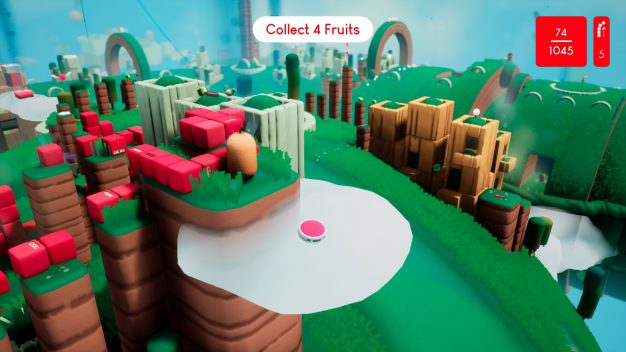 Fruit like the one shown here are massively useful.

Togges is a really open game in that you are free to explore the levels in any way that you wish. Dotted about the place are fruit, some of which are hidden. Togges absolutely love eating fruit and it has a number of cool abilities. Firstly it turns the fruit into a Star Togge. As I mentioned earlier, Star Togges are anchor points meaning that you can always spread your blocks from them. They can be considered waypoints for the purpose of this game. You can use your Toomba to recall all the blocks of a given color from these points too. This is great because you don’t have to go and hoover them all back up individually. Lastly, fruit grants the little Togges powers and allows them to change color. Red Togges for example can stack themselves 5 high and are immune to fire damage. Yellow ones, on the other hand, can stack 7 high and conduct electricity, allowing them to power switches and activate devices. Obviously, the more different varieties you have, the wider the array of puzzles you’ll be able to solve. 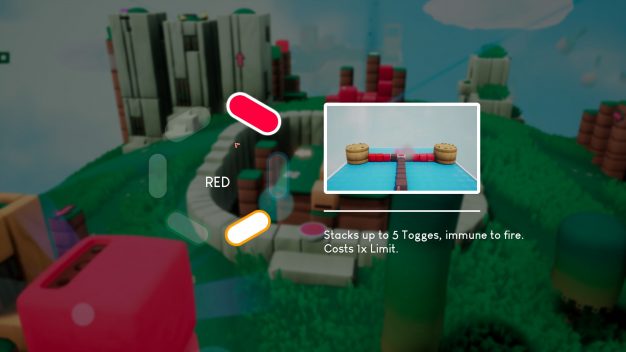 The more color variety, the better your options.

Puzzles in Togges are varied in the way you approach them. Some puzzles are pretty well hidden, requiring you to fill an area with blocks or find a switch to open something else and proceed. The fact that you’re approaching different problems in different ways keeps gameplay fresh, even when the basic mechanics don’t really alter. This is a case of having a great premise that gets built on, rather than throwing new stuff at you all of the time. Aside from static puzzles, you’ll also find obstacle courses that you’ll have to navigate around. It’s really hard to place blocks when the ground is moving. You also have to deal with spike traps and other hazards if you’re going to get the job done. For a game that’s cute and colorful some of these seem a little intimidating at first. When you get your head around what you’re doing though, solving these teasers becomes a lot of fun pretty quickly. 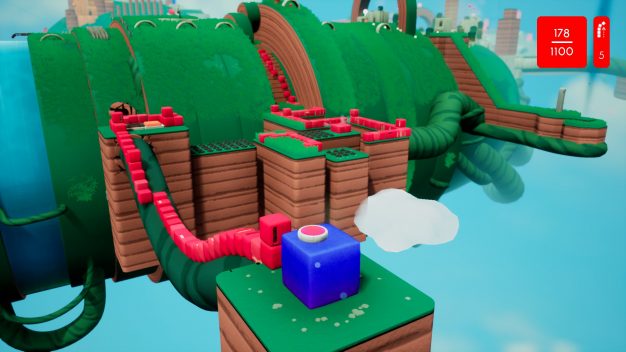 For me, Togges is a strange one. When I started playing I decided pretty quickly that this wasn’t a game for me. I liked the style and the mechanics seemed interesting but this isn’t the sort of puzzler that I usually gravitate toward. I have to say, though, that the more I played the more this title grew on me, to the point where I stopped noticing the time passing. I really enjoy the exploration aspect and when you get the hang of chaining your blocks together everything starts falling into place. 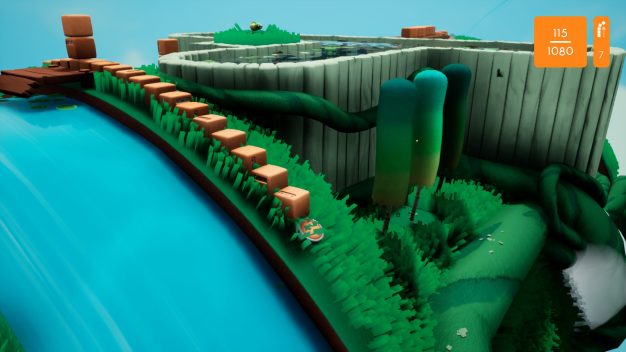 Seeing where you want to be and getting there are often different things.

Nuts and bolts-wise, this is a very cute-looking game. It’s really hard not to fall in love with the setting and characters and the graphics are gorgeous in a slightly wacky sort of way. The story is bonkers but then you’re populating the world with sentient blocks so that’s to be entirely expected. Then we come to the controls. The controls are fine but I found getting the blocks where I wanted them to be a little bit fiddly at times. Sometimes you have to move really quickly, and I found it a bit easy to lose my flow and break my chain as I was avoiding obstacles. This meant rerunning things more often than I’d have liked. There were other areas where I had to be pretty careful about my block placement and had to resort to placing one block at a time which made progress feel a bit slow. None of this is game-breaking and I’d put a certain amount of it down to my shoddy coordination, saying this, it’s still worth mentioning. 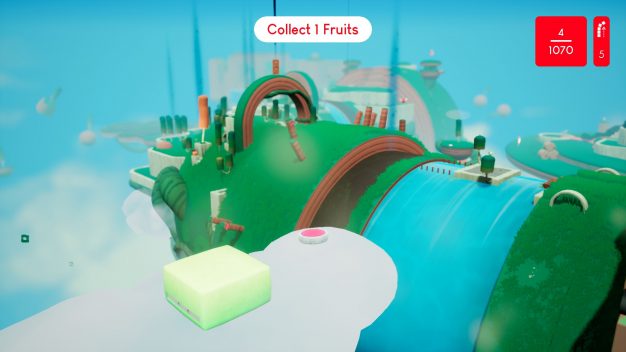 All in all, Togges is a fun and quirky puzzler that can be a little aggravating at times. This being said if it was easy it wouldn’t be anywhere near as enjoyable. I have a feeling that this game is going to be massive. The world already feels big and we’re still a few weeks off release. When the finished version is there for us to explore and enjoy, with all its secrets, hidden things, and brand-new, totally unseen maps; I think this is going to be an adventure well worth having for puzzle fans.