Adventure, side-scrolling or “Metroidvania” types of games have been a staple in the video game world since almost the beginning of the medium and Atlus has brought us another one to devote hours into exploring all of its nooks and crannies. Together with developer ACE Team, the creators of Zeno Clash and Rock of Ages, these two gaming powerhouses have released Abyss Odyssey, a 2D side-scrolling, procedurally-generated adventure game that blends RPG elements with fighting game mechanics. As one of three main characters, you will level-up, collect loot and equipment and improve your fighting skills in order to help her/him defeat the Abyss. This isn’t your typical side-scroller, however, as enemies won’t just simply charge you in a blind rage but will strike, block, parry and dodge in order to cleave your head from your body. Abyss Odyssey is a romp in a surreal fantasy world with a unique art design influenced by Chilean mythology and lore. 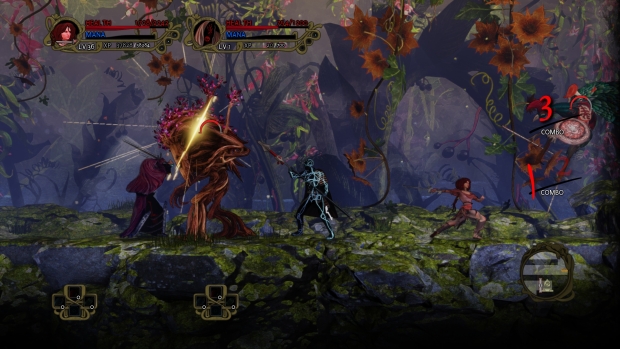 Levels down into the Abyss are either easy, medium or hard in difficulty so make sure you are prepared when you enter a hard area.

Abyss Odyssey is a game that is built around the idea of persistence and replayability. In an effort to get away from the typical trope of death of the player character, ACE Team has constructed a system that allows you to retain your progress if your character should meet her/his demise. Whenever you die in the game, you will return as a foot soldier and have the opportunity to revive your original character at special altars located somewhere in the labyrinths. You will also have the ability to carry over your characters through multiple playthroughs. The cool, standout feature of Abyss Odyssey is that the levels are all procedurally generated so the Abyss will change every time that you enter.

Abyss Odyssey sports a surreal and unique art style that really fits the theme of the game and the elements that dwell within it. The art is all hand drawn in very intricate detail that gives the game a very striking and inviting look. It is almost like looking at a painting at times as the colors are so vivid and bright while portraying a very dark and depressing fantasy world. The character models of the three heroes that you get to choose from are really cool looking with elaborate, flowing, brightly colored fabrics as well as worn and weathered armor. In addition, the enemies such as wood golems, deer women, undead soldiers and the freakish-looking, armless bird-men as well as the varied environments that you will explore are all very well crafted. 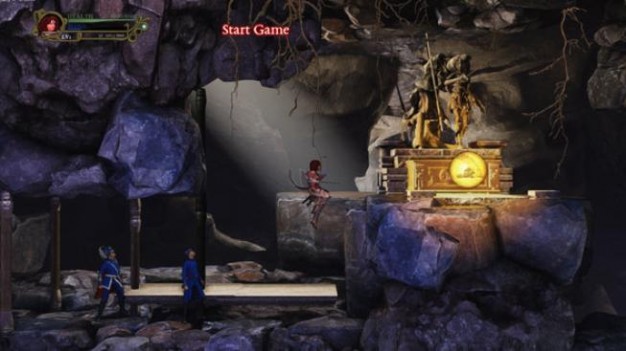 Altars are scattered around the levels so you can adjust your abilities and to be resurrected.

The soundtrack in Abyss Odyssey is nicely done and contains a lot of energetic and upbeat music that helps to immerse you in the experience. The music that plays during your time exploring the Abyss is haunting and really sets the tone of the game. The voice over work is done well even if some of the dialogue can be a little cheesy and predictable at times. The sound effects are also a high point of the game that brings all of the characters and creatures to life. Your player character’s grunt as they go in for an attack, the explosion of grenades thrown from overhead by a floating phantasm as well as the crack from a pistol of an undead soldier sounds real and helps to breathe life into supporting characters that all too often feel one-sided and flat in side-scrollers.

As a way to get as many of the players of Abyss Odyssey as possible to interact together for a common goal, ACE Team has crafted a meta-game within the game where pieces of the Warlock’s mask, which is located on the front of the tome that you see when you first start up the game, will deteriorate as the player community meets certain milestones. Each piece that falls will grant the arch-nemesis, the ruler of the Abyss, new abilities affecting future playthroughs for everyone taking part in trying to conquer the Abyss. Abyss Odyssey supports online and ‘drop-in, drop-out’ co-op on all platforms making it very easy to bring your friends along or to just jump in with someone online and make short work of the levels down into the Abyss. This creates the opportunity for many return trips in an attempt to be apart of the party that finally brings down the arch-nemesis. 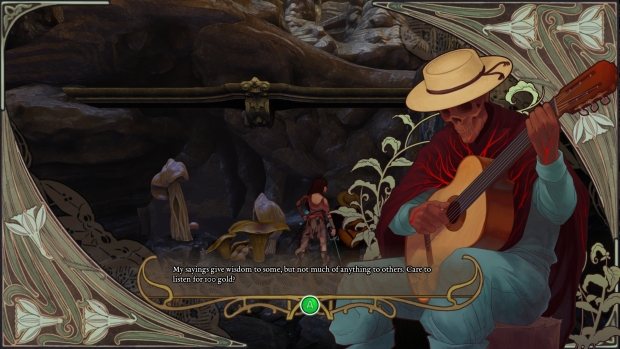 NPCs will offer you advice or sell you items and weapons to replenish your stock or to just get a more powerful weapon.

Although I have to applaud ACE Team for their ambitious goals for Abyss Odyssey, I was still left wanting by the experience and didn’t find the game to be particularly different than any other 2D side-scroller that I have played in the past. Don’t get me wrong, Abyss Odyssey is not a bad game but it just doesn’t do enough to really expect players to think that this is a new type of adventure game. The main idea of the game is that you are going to die a lot but instead of that being a cool feature, it just got to be repetitive and boring after a while. In addition, the character movements aren’t very smooth and the attack animations take too long to complete leaving you open to successful attacks from enemies. The meta-game element is a cool way to keep players coming back but I think that that will get old once you have done that a few times or so. ACE Team has stated that they have a lot of additional content planned for Abyss Odyssey so it might not be a bad idea to wait and see how that content improves the overall gameplay later on. 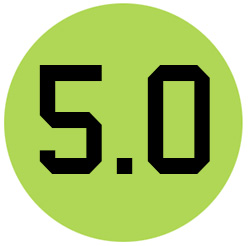