Giant-eyed aliens have invaded the planet and it is up to YOU, John T. Longy, night watchman at the partially abandoned JUPITER Research facility, to stop them! Or at least figure out what the heck is going on while trying to stay alive and escape. The JUPITER Research facility is located somewhere in the remote countryside and is the primary lab of the OLYMPUS GROUP, a shady organization whose scientists have been conducting experiments and doing research on Space and Time. Did these experiments somehow trigger the alien invasion? Why is the facility partially abandoned in the first place? Who is the OLYMPUS GROUP really? Will you ever escape from the basement? Will you ever be reunited with your pizza? All those questions and more will answered as you play: ALBEDO: EYES FROM OUTER SPACE! 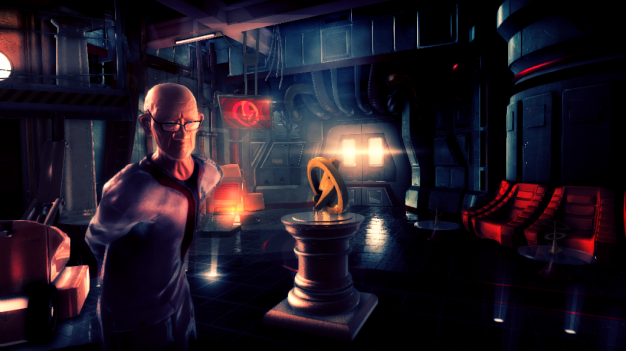 This game rules. If you want to feel like the hero of a 1960’s sci-fi film, here’s your chance. Albedo: Eyes From Outer Space has it all. Aliens, guns, explosions, UFOs, challenging puzzles, brilliant graphics. You name it and you’ll find it here. Gameplay is simple. You play in first-person view, point-and-click to interact with objects, attack any hostile aliens and solve puzzles to continue advancing through Jupiter. Not much else to it actually.

You will find various weapons along the way to help you put a stop to the alien’s invasion. They range from a screwdriver to a shotgun. All are effective against the big eyed threat. After you clear a room, you typically can’t advance to the next without first completing a puzzle of some kind. These puzzles are a blast to figure out. Using commands such as pick-up, throw, use with, drop and put in inventory, you have to understand what needs to happen in any given room to solve the challenge. 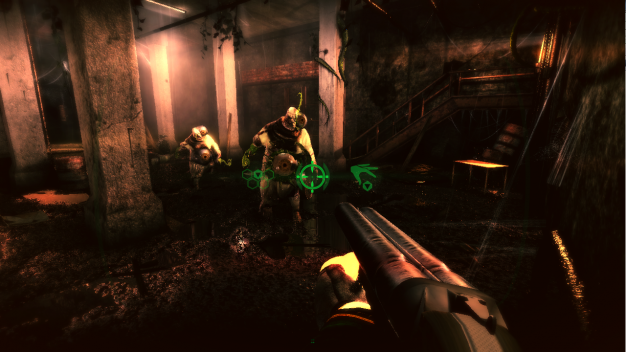 Merge Games, Albedo’s developer, does give you some advantages when it comes to solving its puzzles. The main one being the Temporal Dilation Tool (TDT), which you find almost immediately. The TDT is a sort of futuristic magnifying glass that lets you glimpse at things in the future. So far, I have only used this to solve puzzles. It essentially lets you glimpse at the completed version of a puzzle or challenge, thus allowing you to work backwards in order to solve it.

Another trick of the puzzle solving trade is using the TAB key. Hitting TAB in Albedo: Eyes from Outer Space will light up everything in a room that can be interacted with, letting you know if you missed a key item or tool required to complete your current task. John will also talk on occasion, giving you the general idea of what needs to get done, such as “What’s that smell?” That’s a less-than-subtle hint for you to go look for something smelly. The puzzles aren’t to be taken lightly, though. Several of the puzzles in my playthrough took me quite a while to figure out. For instance, in order to solve puzzle A, I had to first figure out how to solve puzzles B, C, and D. Puzzle B might require a tiny, over looked item, Puzzle C may have you combine that tiny item with something else in order to fashion a tool to solve Puzzle D which will then give you the key to unlocking the solution of Puzzle A. 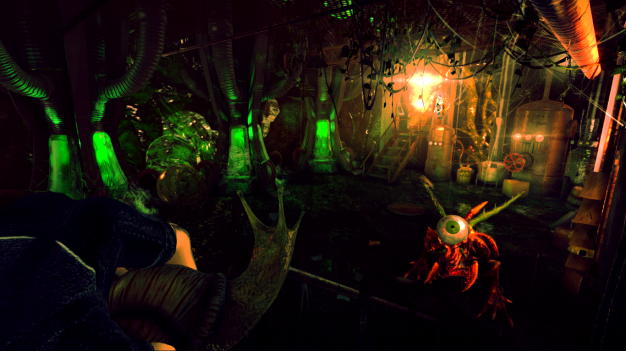 You can see one of the giant-eyed aliens above.

A cool fact about Albedo: Eyes From Outer Space is that it was made by ONE guy, Fabrizio Zagaglia. Other interesting facts and features include:

Does all the neat futuristic stuff I mentioned above and more when you pick-up the Early Access version of Albedo: Eyes From Outer Space on Steam today for $14.99. PEW! PEW!

Albedo: Eyes from Outer Space, at first glance, looks like a cheesy, sci-fi film from the 1960’s and a mediocre shooter at best. You’re proven wrong immediately. This game has a very deep and challenging puzzle component that plays a huge part in Albedo’s gameplay. It was both refreshing and unexpected. Sci-fi and shooting fans, Albedo is a keeper.