The time management genre is a really hit-and-miss thing for me in general. When this first appeared it tended to be smaller Indie games that were leading the charge. This isn’t to say they weren’t any good, they absolutely were but at the same time they were new and we didn’t have anything to compare to. You’d find some of the best games of this type on sites such as Reflexive Arcade back in the day. Now there’s a site I definitely miss, but that’s a story for another time. Coming back to my point, cooking games especially have been done to death, as has anything that involves serving customers. This makes a lot of these games rehashes of a common theme without any real ingenuity present. This means that most of this stuff ends up as mobile shovelware and when it appears on other systems gets taken with a bucketful of salt. The game we’ll be discussing today is Alchemist Simulator and it is, of course, a time management sim. Is it any good? Well, let’s find out.

Alchemist Simulator sees you taking on the role of an alchemist’s apprentice. Your master has gone away and you’ll have to run his shop for him. The plus to this is that if you can learn how to complete different potion formulas and keep his customers happy you won’t need to go to alchemist school. It’s worth noting that running his business into the ground or accidentally blowing his house up is a bad idea so success is pretty much mandatory.

Alchemist Simulator sees you start the day with a bunch of tasks that need completing. These range from lessons in potion making which simply see you sending your tutor completed potions so he doesn’t give you an F, to customers needing potions with various properties. If you complete these tonics in a timely manner and get them out to the customer you will receive gold. Gold is obviously very important as it’s used to buy ingredients and upgrade the gear in your shop enabling you to complete more advanced tasks. 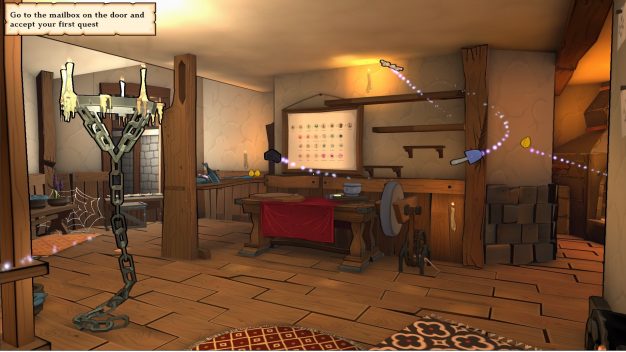 This is the shop. It isn’t very big but it’s home.

This is the sort of game where the puzzles are straightforward when you work out what to do. Each potion has a series of properties that need to be present for it to function. Your ingredients have the desired properties alongside a bunch of others that you don’t need and will cause your potion to fail. You then need to work out how to remove the harmful bits and enrich the remaining ones to the desired strength. For example, you might want “wind” as a property in your potion. This property will be in the “motion” property chain and this might sit alongside “fire” in the ingredient makeup. As you don’t want to incinerate the user of your jump potion you’ll want to remove fire and then enrich the already present “motion” attribute so that it becomes “wind.” Sound complicated? It bloody is but it’s also a lot of fun when you get the hang of it.

This is not a game that suffers failure lightly. You often sort of know how to prepare an ingredient but if you take one step in the wrong direction you’ll end up with something that you can’t use. Importantly, you can’t keep that preparation for later and it goes in the bin. This means that you might have to buy the same ingredient multiple times until you work out how best to prepare it. These things aren’t cheap and if you run out of gold you won’t be buying any more so diligence and an eye for detail are really important here. If you don’t notice you’ve miss-prepared something and add it to a potion you’re working on it’ll fail and you’ll be starting over which is going to be even more expensive because you’ll be re-buying the stuff you prepared properly as well. This is a game that doesn’t give many hints so having a notepad handy is probably a good idea if you’re going to avoid slips. 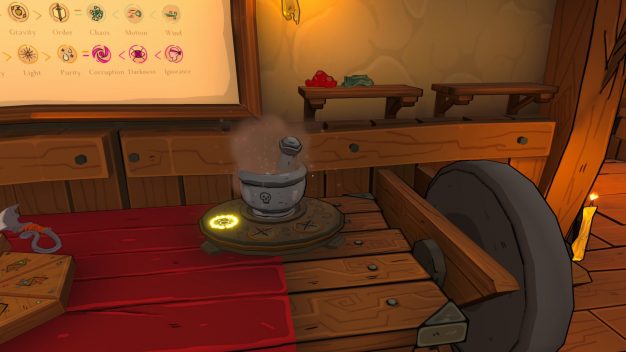 Tools of the trade. If you’re going to enrich ingredients that pestle will come in really handy.

So, I mentioned this was a time management sim and it is but not in the sense that most of us remember. This isn’t a case of having to serve so many customers a day to clear a level, though you will get more requests each day. In this case, each of those requests is time-sensitive. Some potions you can complete immediately but others will take a bit of practice. If you’re playing about with ingredients you might not be able to complete a task in one day. Most seem to have a three-day limit, which is ample but while you’re faffing about with one job all the others are mounting up, so it still pays to be on your toes. Another important point is that when a day ends you’re going to be going to bed whether you like it or not so you can’t just work longer with penalties.

One thing I don’t like and I mentioned this briefly earlier is the inability to store partly prepared ingredients. Making this more annoying is that if you happen to be holding something when the game decides it’s sleepy time you’ll have lost it when you wake up. It could be said that this is your fault for not watching the time properly but when you’re engrossed in what you’re doing it’s easy not to look out of the window. Having ingredients that you’ve prepared properly taken off you simply because you can’t just put them down and store them feels a bit like a kick in the teeth. 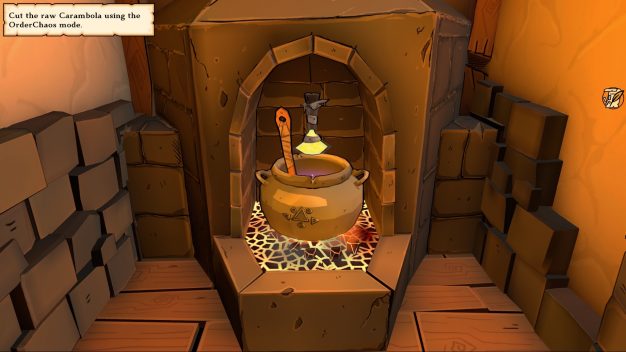 You want bottles of magic coming out of that thing. Try and avoid black smoke, it’s a very expensive commodity.

Graphically Alchemist Simulator is colorful, simplistic, and fun. You won’t see the world outside the shop, (aside from looking through the window,) but all the action is centered around that microcosm so you don’t need to. There’s a wonderful juxtaposition of 3D elements and hand-painted ones so you sort of feel like you’re playing in a very realistic cartoon.   This is a first-person game and that took a little getting used to. Moving about felt slightly clunky at first but this is something that you get used to pretty quickly so isn’t a big deal. This is good because moving fluidly in any time management setting is really important to keep a good flow going. If you’re getting stuck on walls and struggling to pick items up you’re going to be in trouble fairly fast.

The story in Alchemist Simulator is good but not great. The plot serves as a vehicle for the game as opposed to being something you’ll be fixated on following. I’ve mentioned the basics and I won’t go any further there for fear of spoilers but I’d call it decent but not awe-inspiring overall. 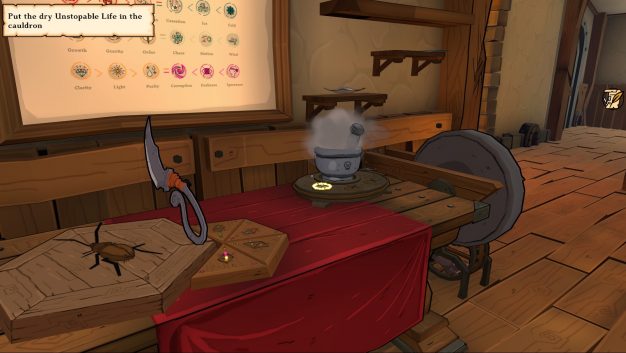 Keep your blade sharp, you’ll be using it a lot.

All in all Alchemist Simulator is a lot of fun but it’s a really challenging prospect because you aren’t given a vast amount of help. If you don’t like puzzles that make you work for a solution at the cost of your own diminishing sanity this will not be the game for you. It’s a case of knowing what you need to do and actually doing it being two very different things. If, on the other hand, you’re a patient player that doesn’t mind starting over a few times, (a lot,) to get the desired result I think you’ll have a lot of fun here. This is a game that I’d call a puzzler with some time management elements as opposed to a time management sim so there’s that too. You’ll have more thinking time than you’d usually expect to get but don’t take that for granted for reasons I’ve already mentioned. If you have a logical mind or just enjoy experimenting there’s a lot of fun to be had with this one.

All the right ingredients

Alchemist Simulator is brilliant if you love tricky puzzlers. This is the sort of game where you’re given all of the tools to complete a task and you can see the solution right in front of you. Getting from point A to point B is where the challenge comes in, though. If you have a logical mind or are the sort of gamer willing to attempt the same thing multiple times to get the desired result you’re going to love this one. If you’re easily frustrated I’d steer clear because you’ll struggle with the lack of hints and handholding present. The story could use a bit of tidying up and there are a few quality of life changes that would make this title really special but other than this Alchemist Simulator is a great addition to any puzzle library.