Some people out there enjoy the minutiae of everyday life, especially when it comes in the form of management games. One of those genres is shop management, where the joys of buying low and selling high, as well as appeasing customers, are the keys to success. An Italian developer, Curtel Games, recently took a stab at it with its game, Alchemy Emporium, out now on Steam for PCs.

Touted as a “fantasy management game,” the premise of Alchemy Emporium is simple – “buy ingredients, turn them into potions, and sell them for profit.” Playing the game, however, is so much more complicated than that. Those simplicities are aggregated by adding more steps to the buy, create, and sell aspects.

Starting a new game of Alchemy Emporium immediately sees you being given a bunch of options about your character that will affect her bonuses for a bunch of traits and skills. You will also select who will be your partner for the shop (i.e., whether they are working with you as a co-owner for free or as an adviser who will charge you for rent). As a side note, there are a few partners that are definitely some funny references to TV shows. Finally, you will choose the village or town in which you want to open your shop; which acts like the difficulty factor of the campaign. 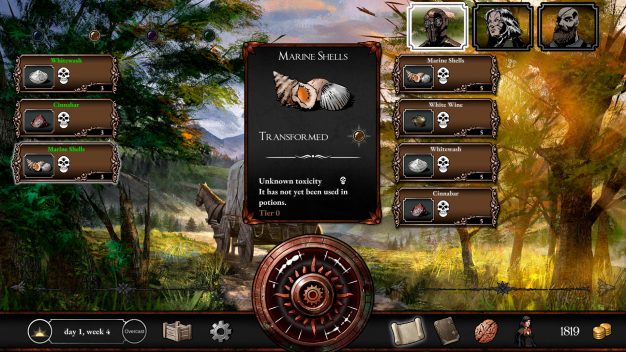 A campaign in Alchemy Emporium consists of managing your shop in chunks of weeks. A week must be planned out with these different tasks: purchasing ingredients from traders, mixing those ingredients to create potions, tasting the potions for their effects, labeling the potions with their known effects, moving inventory from the warehouse to the shop and vice versa, selling those items to customers, and finally practicing some self-care by reading books to improve your skills. This, ladies and gents, is how you can stretch the simple shop management aspects of buying and selling into layers of mini-games that, if developed well, would have been awesome.

Let’s start with the tutorials. After planning out your week, you then start your week out with the first task you have planned. All the steps mentioned earlier have their own tutorials and, this is important if you’re new to the game, but for a title with so many added complexities, Alchemy Emporium, won’t hold your hand at all. While the tutorials give you a quick rundown on what to do for each task, the game simply runs its course; it’s sink or float. The only tiny assistance that I found was an already filled out recommended preset for a planned week, which helped me for at least two weeks in-game. 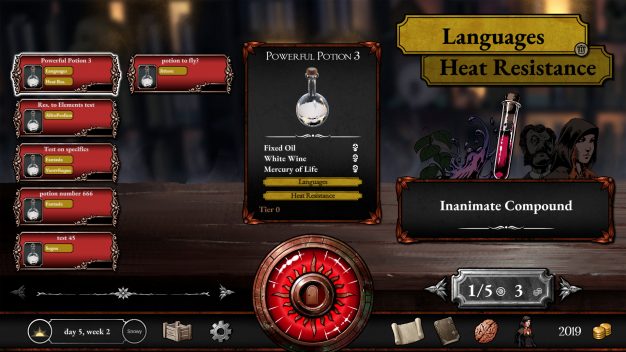 Another instance where Alchemy Emporium will not hold your hand is in the ingredient mixing task. In this phase, you are tasked with mixing three ingredients and seeing if they react to form a concoction. First, you aren’t given a success rate of the ingredients chosen. You are going in blind. If you are successful, however, it’s a little annoying that you’ll have to remember the three ingredients that formed that concoction or refer to them again in your in-game journal. Automation is non-existent here. Finally, to pour salt in the wound, success rates aren’t always 100%; there’s a chance that your three ingredients will fail to create the concoction, and of course, you won’t know the actual rate, because the game fails to inform you.

Being uninformed in Alchemy Emporium is like a theme, basically. After not having enough potions to sell after three weeks, I decided to completely fill my week with ingredient procurement (a full day of doing that with three rounds of this task), mixing known potions in bulk (another full day), labeling them (full day), and selling them to maximize that week’s profit potential (two full days). Lo and behold my disappointment, when the game decided to end my week after the second round of mixing on the second day. I wasn’t given a reason why, (maybe I got exhausted by working hard?) or anything. It just literally ended with planning on the next week. 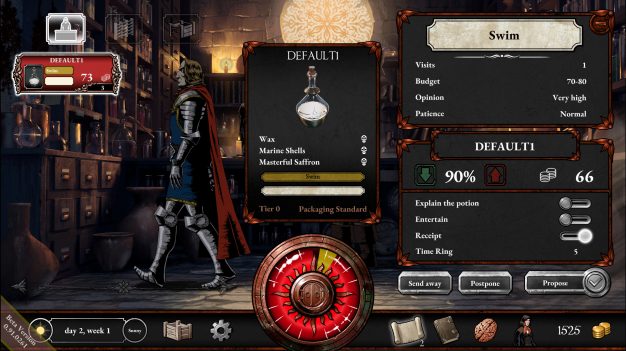 The game not telling you anything also trickles to the selling aspect of Alchemy Emporium. Your customers are likely to have some very specific ideas about what they need. Transversely, you may have a ton of different potions with different effects on hand, but if RNGesus isn’t in your favor, you won’t be able to sell them anything. There is always the option of telling them to come back next week, but here’s the huge problem: you don’t know what they want! The game doesn’t tell you what they are looking for, and you’re left wondering and experimenting to figure that out. It’s incredibly frustrating when you’re trying to sell something nobody wants. It’s simple Business 101.

The silver lining I do know is that these problems can be simple fixes that an update can provide. However, as it stands, there is not a lot of things to like about Alchemy Emporium. You can simply play it as how it was advertised: buy ingredients, create potions, and sell them to customers and have fun in the beginning. Once the game starts screwing with you with the little problems of not telling you anything, you’ll quickly change your mind.

Manage an Emporium from Buying, Creating, and Selling Concoctions