As a single woman on the wrong end of my 30s, who is constantly being reminded that my womb will soon be a barren wasteland where no seed can take root (it ain’t gonna happen universe, so you can stop mailing me unsolicited Simulac samples), I can really get behind a game where babies – and not my rapidly shriveling eggs – are the enemy. Just such a game has been created by videogame designer Elan Lee and cartoonist Matthew Inman. This is the same two-man team behind Exploding Kittens, the most-backed project in Kickstarter history; the winning combo of augmented reality gaming’s pioneer and The Oatmeal‘s artist was enough to part 219,382 backers from more than 8.5 millions dollars. Their recently released follow-up, Bears vs Babies, garnered a meager 3.2 million dollars (32,000 times its original crowdfunding goal), but to me it looks like an even better game than Exploding Kittens. If for no other reason than the hirsute box. 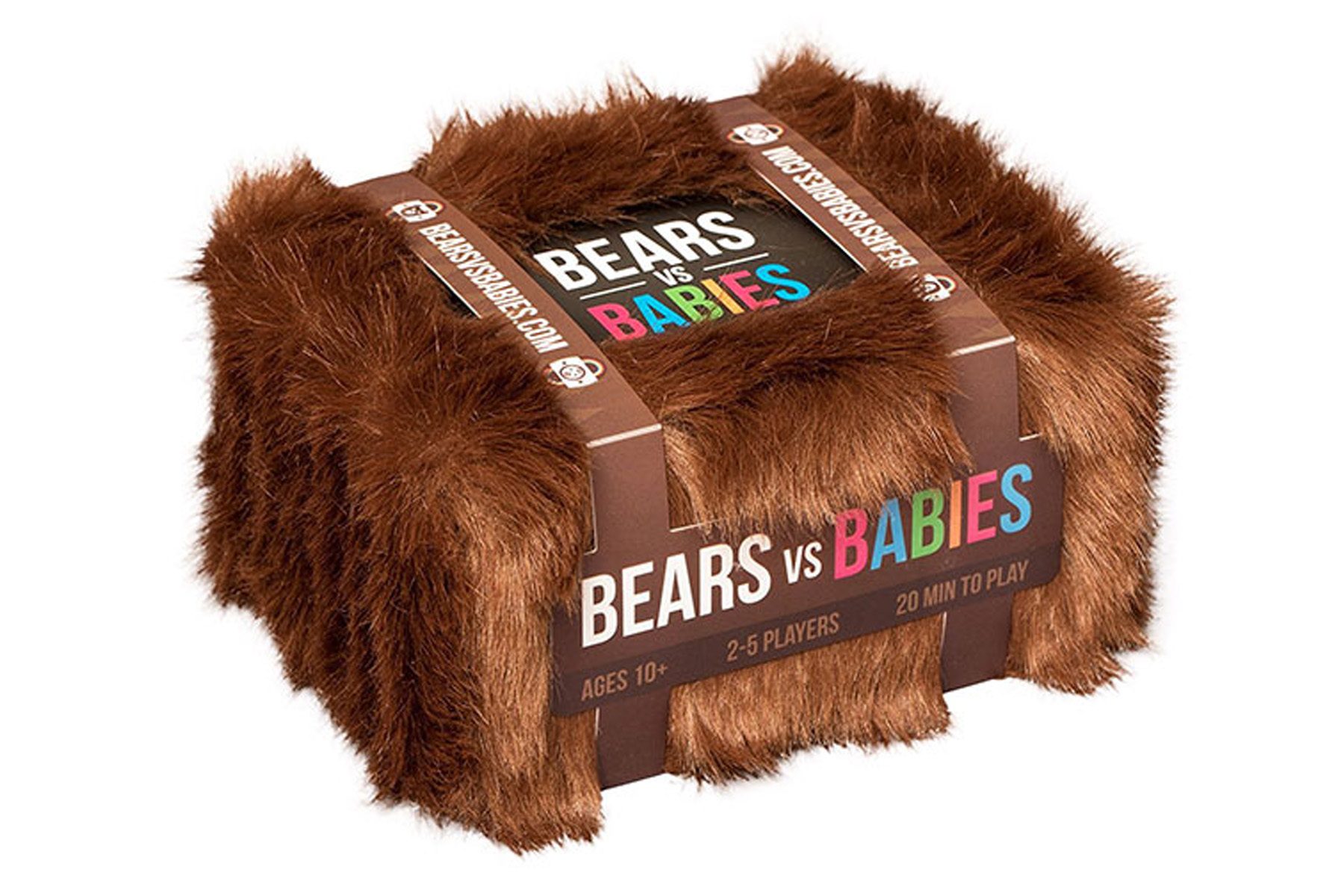 Yes, the box is covered in fur. As much as I love the limited edition Exploding Kittens box that meows every time you open it, the luxurious brown bear pelt adorning the standard edition Bears vs Babies box takes the proverbial cake; you don’t even need to see the contents to know you’re in for a weird 20 minutes, minimum. But even better than the packaging are the contents. To be specific, the cards. To be even more specific, the artwork on the cards.

Bears vs Babies is a card game where you build freakish monsters, exquisite corpse-style (finally using that fine art minor, mom!), to eat even more freakish babies. The Oatmeal’s Matthew Inman has brought the full force of his twisted, 12-year-old id to bear (pun definitely intended) in dreaming up these Frankenstein-ian combos. The head of a mustachioed merman. A body strapped with burrito and knife-filled bandoliers. The legs of world class competitive dancer. And arms that are small Tyrannosaurus Rexes, who themselves are wielding even smaller nunchuks. I could have gone for even crazier combos, but the core game is rated ages 10+, so the subversiveness sticks firm at the middle school level. That being said, the art is great; monsters and babies alike are rendered in Inman’s signature bold, bright and a little bit gross “Gonzo lite” style. 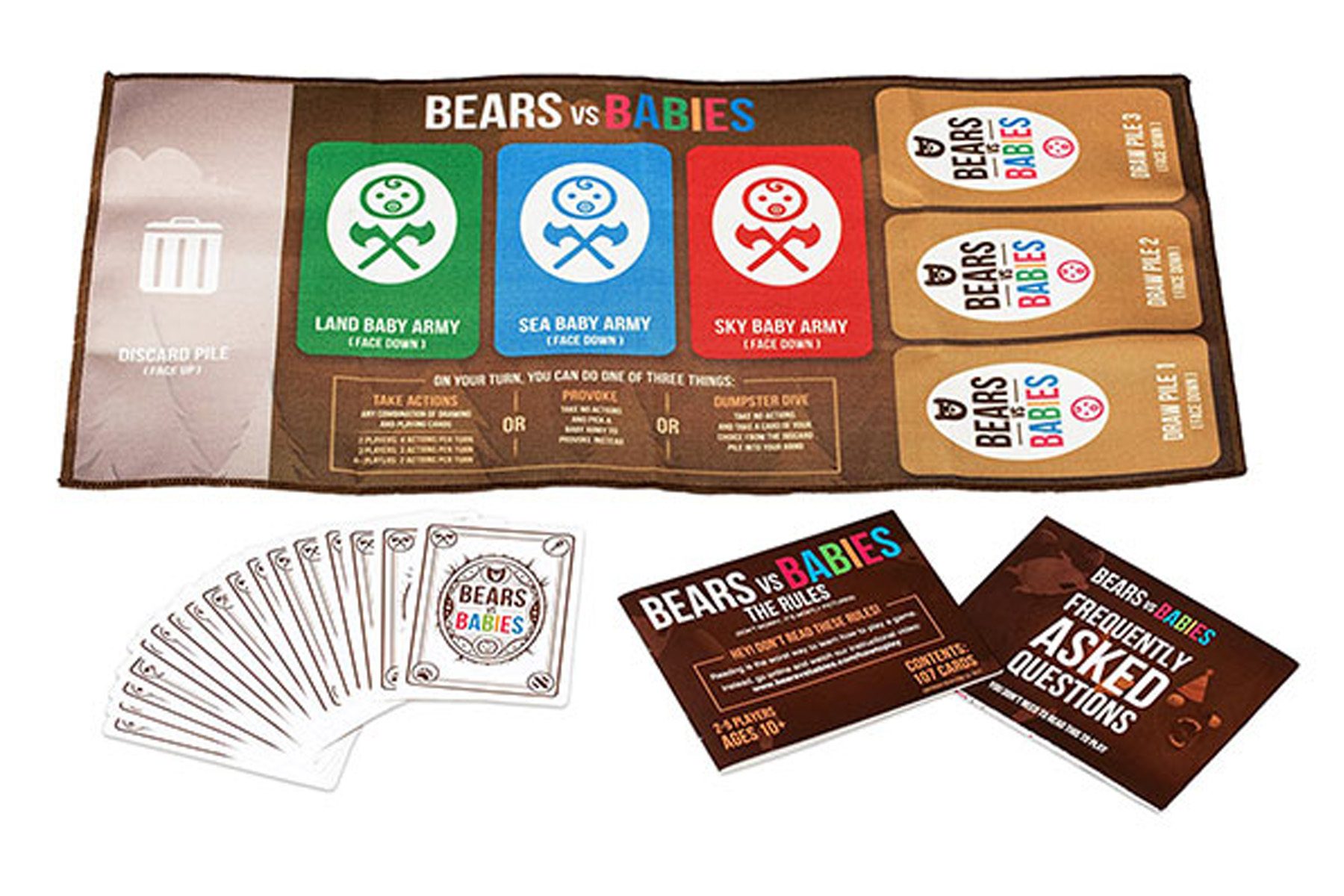 So it looks great, but how does it play? Bears vs Babies is essentially a deck building game. You draw from a shared stack, split into three piles “because sometimes you’re not so great at shuffling,” that consists of monster parts, baby cards and action cards. When you draw a part, you can use it to build your monster; when you draw a baby, you have to immediately add it to the ranks of the corresponding baby army; when you draw an action card, you can use it to enhance your monster or weaken your opponents.

There are three types of monsters you can build – land, sea and sky – determined by the head. As soon as you play a head card, you have technically built a monster, and you don’t have to finish building one monster before starting on another. On your turn, you can do one of three things; you can draw and/or play cards from your hand to build your monsters; you can pick a baby army to provoke; you can choose a card from the discard pile. When a baby army is provoked, they attack all players’ monster armies of the same type. The player with the strongest monster army that can beat the babies wins, collecting the babies as points. Win or lose, all of the monsters that participated in the baby bloodbath are discarded, so don’t get too attached to that Pomeranian of light and wonder. 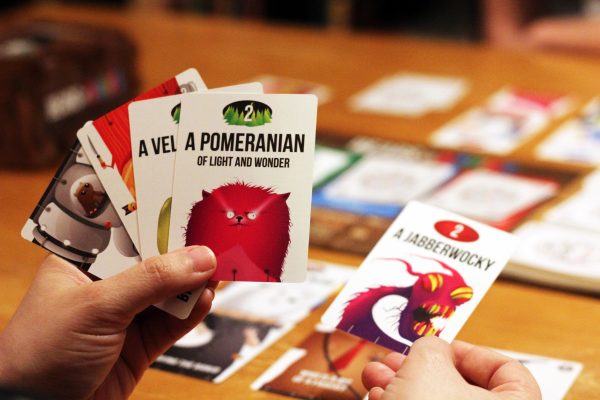 The game ends when there are no more cards left to draw from the three draw piles. Each player gets one last crack at defeating the remaining les enfants terribles before totaling their baby points, the win going to the player with the most points. This brings me to my main criticism of Bears vs Babies – in every game, you play every card. For me, the best part of any card game is the possibility of drawing that “atomic card.” In Poker, it’s the missing ace in a royal flush. In Uno, it’s the “Wild Draw Four.” In Cards Against Humanity, it’s “Pacman uncontrollably guzzling”…well, you get the idea. Bears vs Babies doesn’t have an atomic card.

What it has are five bear heads; these are the most valuable monster heads because they’re worth an extra point, but also the most vulnerable because they have to fight in every battle. Fundamentally, they don’t do much to change the gameplay. Maybe I would have learned to leverage them better with more playthroughs, but that brings us back to the fact that you see every card on every playthrough, which hurts replayability. As long as I’m up on this soapbox, I didn’t like that the arms came in sets while all the other monster body parts were unique. I mean sure, it’s cool to give your salmon lumberjack a pair of lobster claws for arms, but it would be even cooler to give him one lobster claw and one fire hose that sprays bees. I also didn’t like that some of the baby cards were worth zero points. My monster lost their life, and the world lost all the potential joy a llama with a body made of sushi could have brought to it, fighting for those baby cards and one of them isn’t even worth any points? 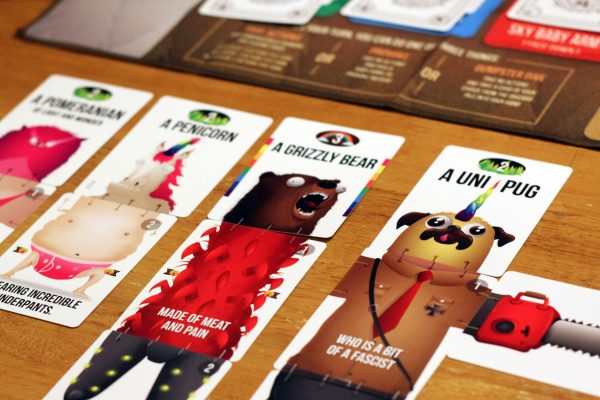 While Exploding Kittens played like a super low stakes Russian roulette, Bears vs Babies involves a little more strategy – you have to plan how to build your monsters, when to provoke the babies, when to play action cards against other players – I definitely wouldn’t call it a strategy game. I would call it a great party game. It’s easy to grasp, quick to play, and good for laughs. I could definitely see this being the appertif before a long night of CAH. But in order for it to be great game, full stop, it needs more cards, more variety, and a different way to end the damn thing.

Bears vs Babies retails for $30. There’s also a NSFW Expansion Pack that retails for $10, which adds another 30 mostly dildo-centric cards to the 107 card core game (cards in the NSFW Expansion Pack have the same backs as cards in the core game, but the faces are marked so you can easily purge the deck of explicit content for a family-friendly playthrough). You could pick up a copy from Target or Amazon, but buying directly from the Bears vs Babies store gets you a personalized comic strip. God knows how, but they really nailed my likeness. It’s like looking into a mirror. 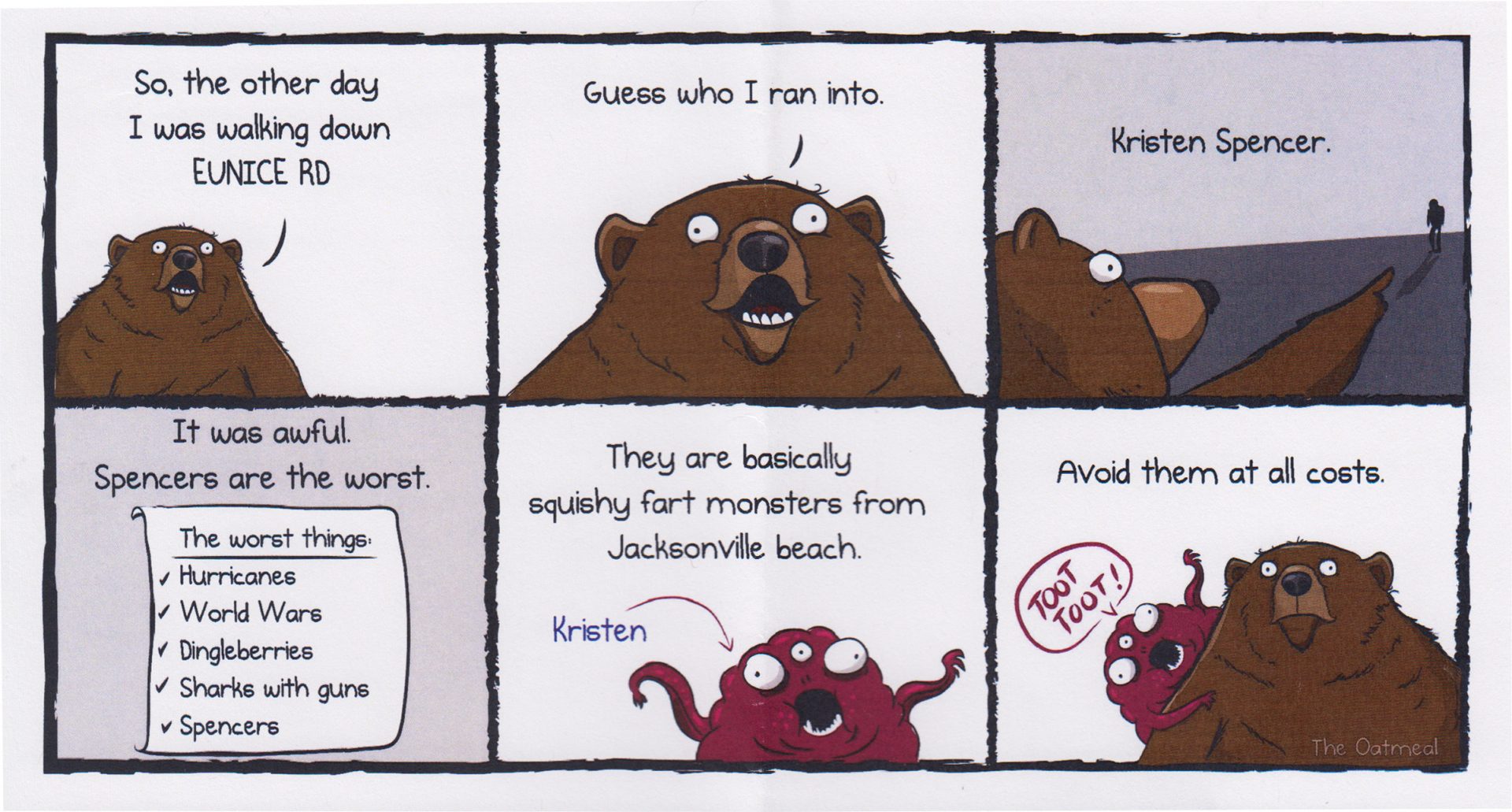 Future expansion packs will definitely add more volume to the deck and hopefully more variety to the cards, not just in their monstrous absurdity but in their ability and value.