I could start off this review with some reference to the 1980s drug cartels and how much I enjoyed some recent popular entertainment that captured the essence of the time. This is a popular introductory trope among game reviewers (and I will definitely be using it in the future). But the reality is that I am not into that stuff, and nor do you have to be, to enjoy Cartel Tycoon, the new business survival sim from developer Moon Moose and publisher tinyBuild. It’s also nice to see games graduate from Early Access! 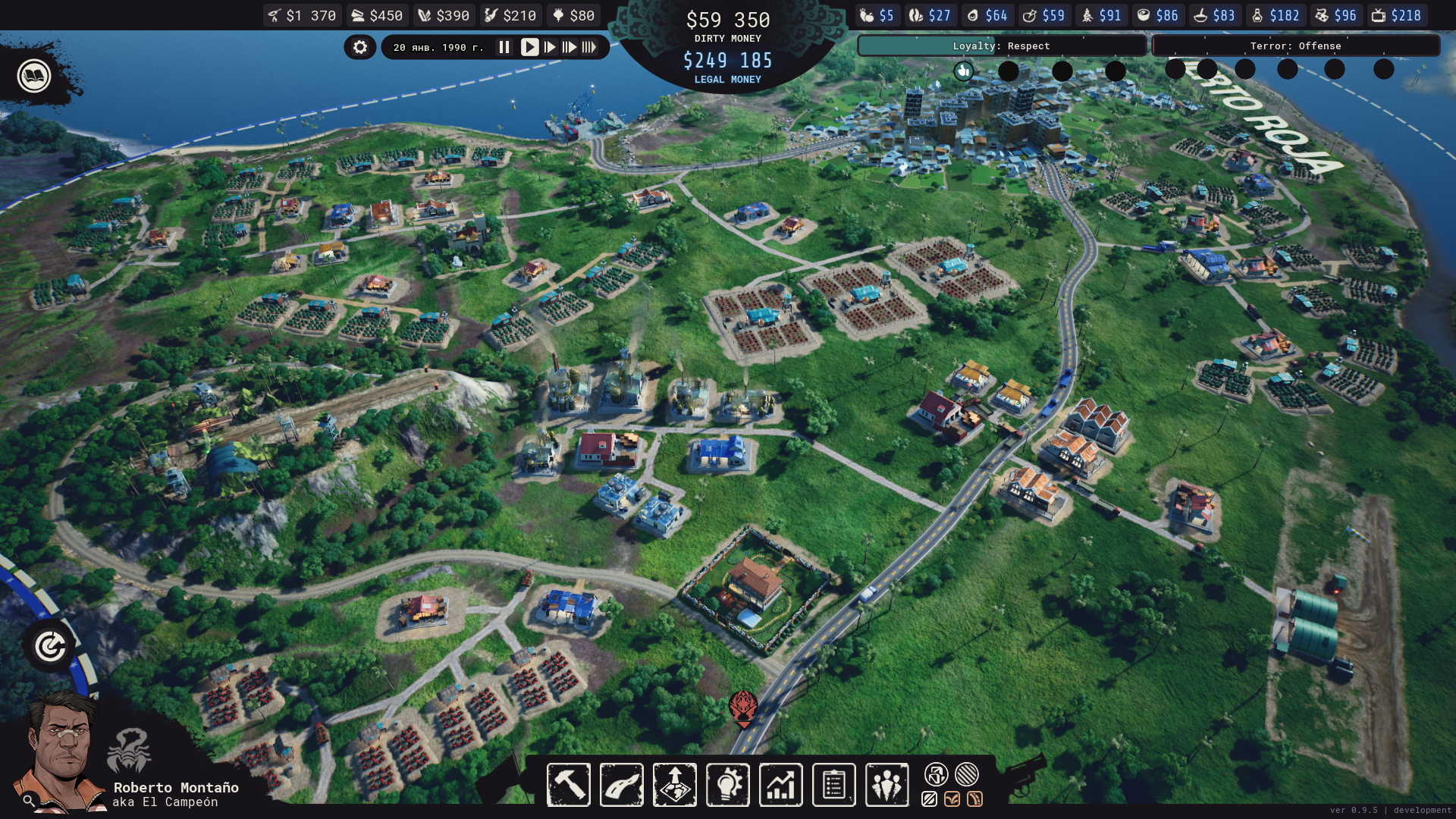 Cartel Tycoon is a building and management resource manager game (think Tropico and Cities: Skylines), but has a clear identity all its own as a business sim. As a fledgling leader of a cartel, you’re tasked with getting operations up and running with the help of some lucrative investors. You’ll start small with farming and selling illegal goods through small local riverboat piers or airports, but eventually you’ll grow your empire to require airfields, seaports, and border checkpoints to sell your goods.

There are different crops to farm and the product can become much more elaborate as you build workshops to smuggle illegal goods inside legal goods, labs to synthesize high value narcotics, and additional support buildings to keep things moving efficiently. It feels great when everything is optimized and running smoothly, and your bank account will reflect that. An elaborate research tree is also available to upgrade building capacity, efficiency, etc, as well as unlocking new buildings to expand your empire. 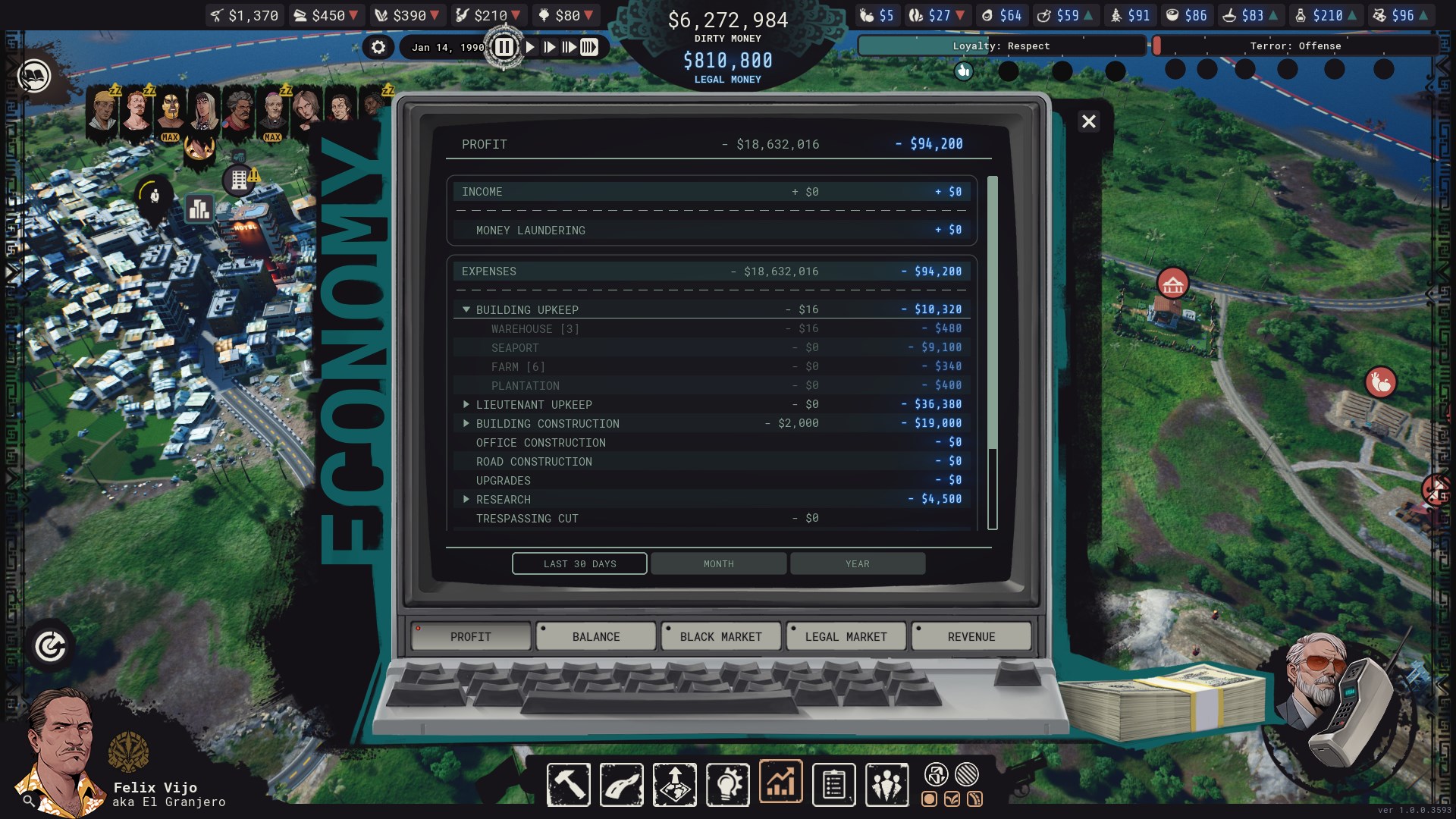 So where does the survival aspect of Cartel Tycoon come in? Well you aren’t the only one in the region trying to make money. Rival gangs and cartels are waiting to start trouble and cut in on your empire. Lieutenants can be hired to help defend against rival gangs and also serve as your errand runners as you take over neighboring territories by aligning yourself with the town mayors. These helpers have a price and you’ll be consistently balancing their loyalty as you continue in your exploits.

You’ll also be balancing loyalty among the cities you “own” and the terror you inflict on its citizens as you take over different regions and battle gangs/cartels. Too much terror can alert law enforcement, from local police to the DEA, to step in and seize buildings, block roads, and confiscate goods. Spending accumulated loyalty with mayors can lessen threats to your empire and reduce terror, but you’ll have to earn their loyalty back by spending money. 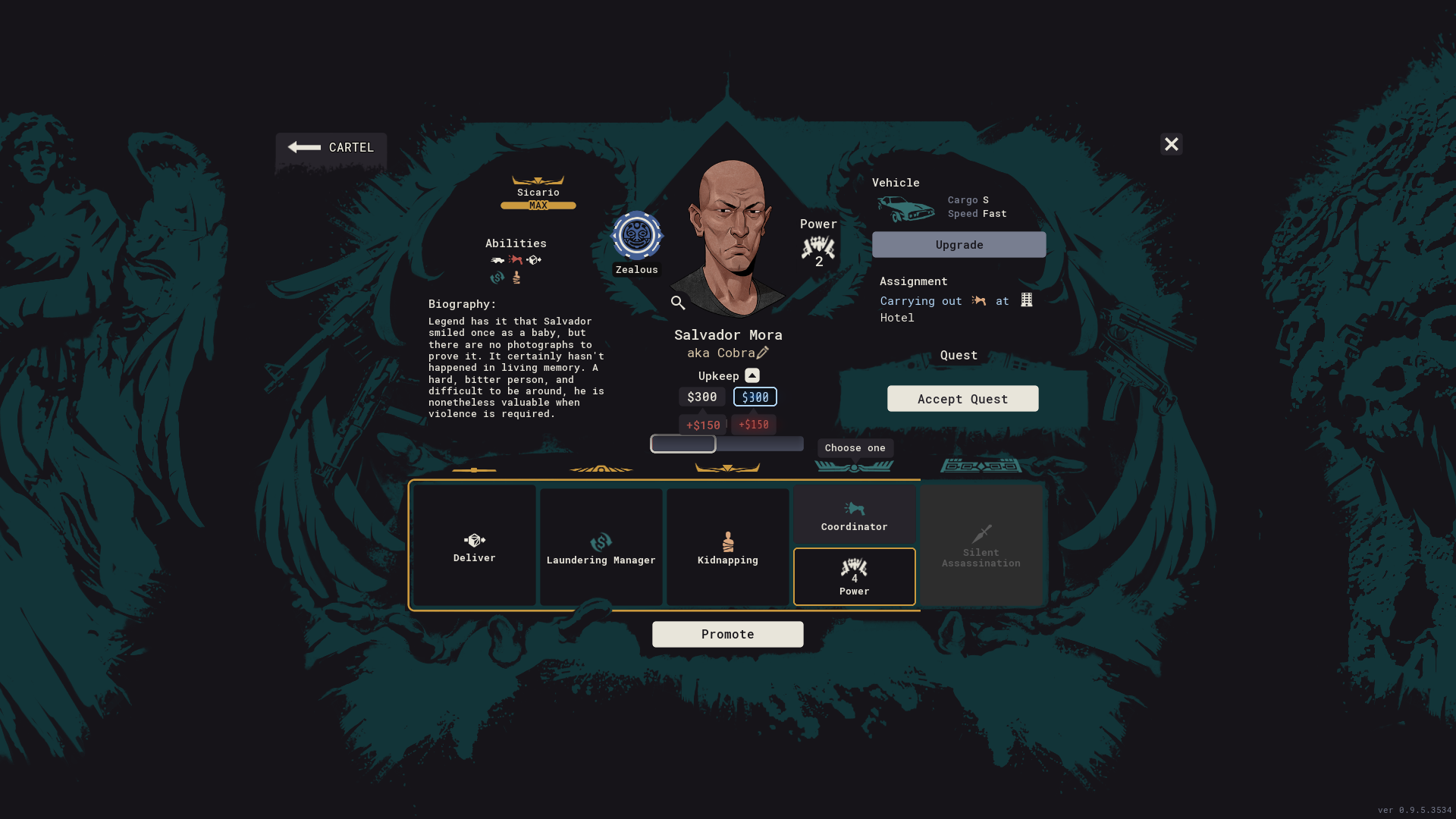 Money makes the world go ’round and in Cartel Tycoon you have to diligently deal with 2 budgets consisting of dirty money (eg, money you make from selling illegal goods) and legal money (eg, laundered cash). There are various buildings that you can construct in controlled cities to wash that dirty money clean, but deciding how you run your various facilities can become tricky if you aren’t keeping tabs on the flow of money. Dirty money has to be strategically delivered to locations to be used, while legal tender is like using your debit card. Luckily there is a pause button to help you try and keep all the balls in the air.

Admittedly, this game was a lot to juggle for me on Normal difficulty, and I lost some capos (eg, leaders) by not paying attention to some of the important balancing that I listed above. But I definitely had fun playing around in the vibrant maps and beautiful aesthetics. The mix of 2D cut scenes and 3D gameplay work very well, and the voice acting is pretty solid, too. There is a story here, and your progression through the game via fulfilling quests is rewarded with story beats as you navigate the troubled business of being a Cartel Tycoon. The UI is very sleek, but I think the devs can add a couple of items to improve quality of life (more on that in a bit). Cartel Tycoon has a lot going for it that makes it a very enjoyable building/resource management business survival sim, and I look forward to the improvements and other developments the team has in store for the near future. 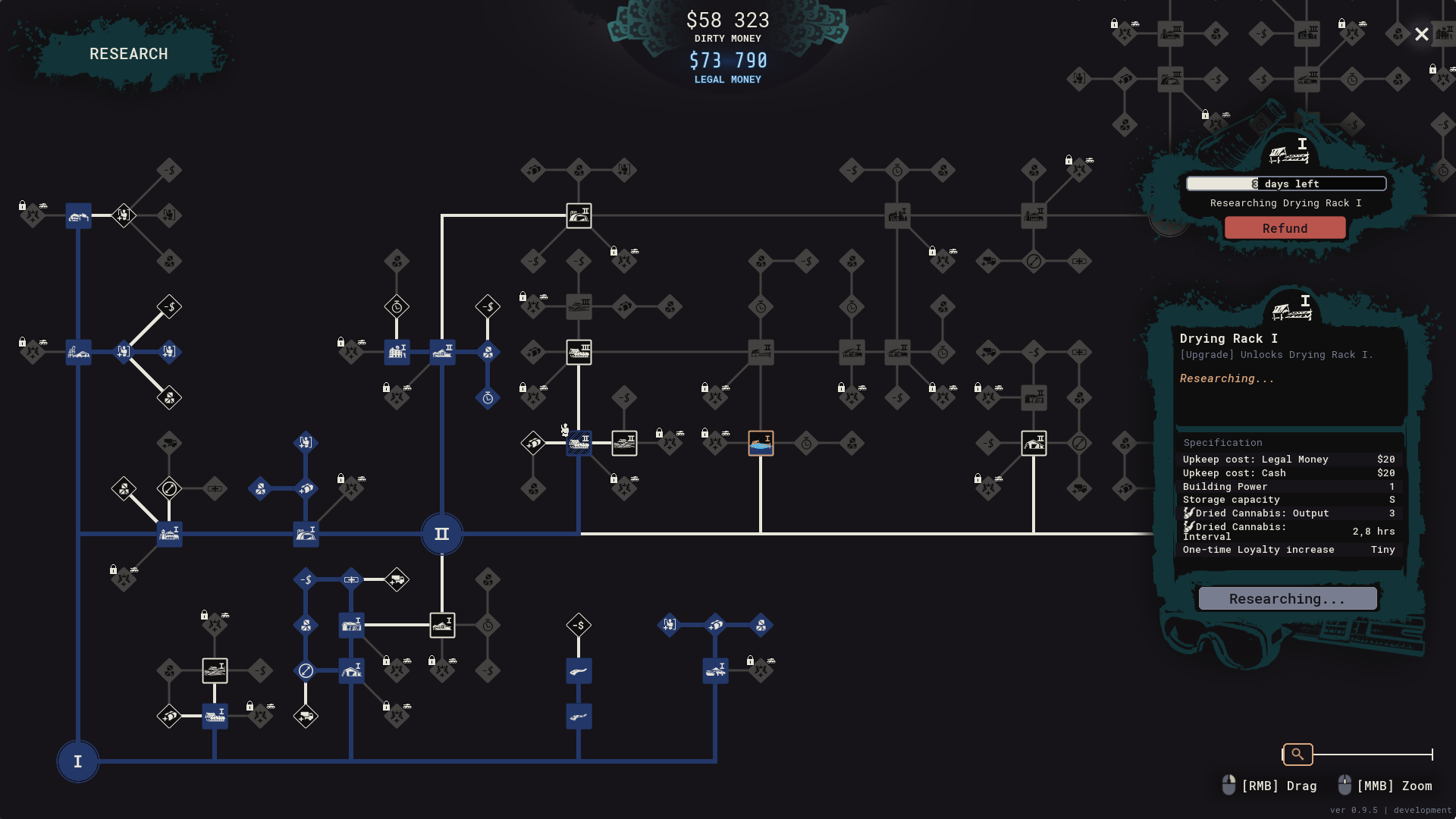 While there are of positives here with Cartel Tycoon, there are bound to be some drawbacks. Admittedly, there aren’t many that I feel warrant any real negativity. The tutorial does a decent job to get you started, but there are some things you’ll have to learn on your own. I will warn you now: you will build facilities on fertile land and totally regret it. As the game pushes you forward via the story, I ended up building things in some odd spots that I later regretted.

Make sure you understand that there are components of the UI that can give you lots of information and also, you can’t just demolish buildings. You’ll need a capo or lieutenant who has that ability. Clicking around can be tricky when buildings are clustered together, especially in cities (make sure to zoom in to hone in on your target building or lieutenant). I think as more players start jumping on to 1.0, there will be other aspects of the UI that could use some improvement that I didn’t even think of. 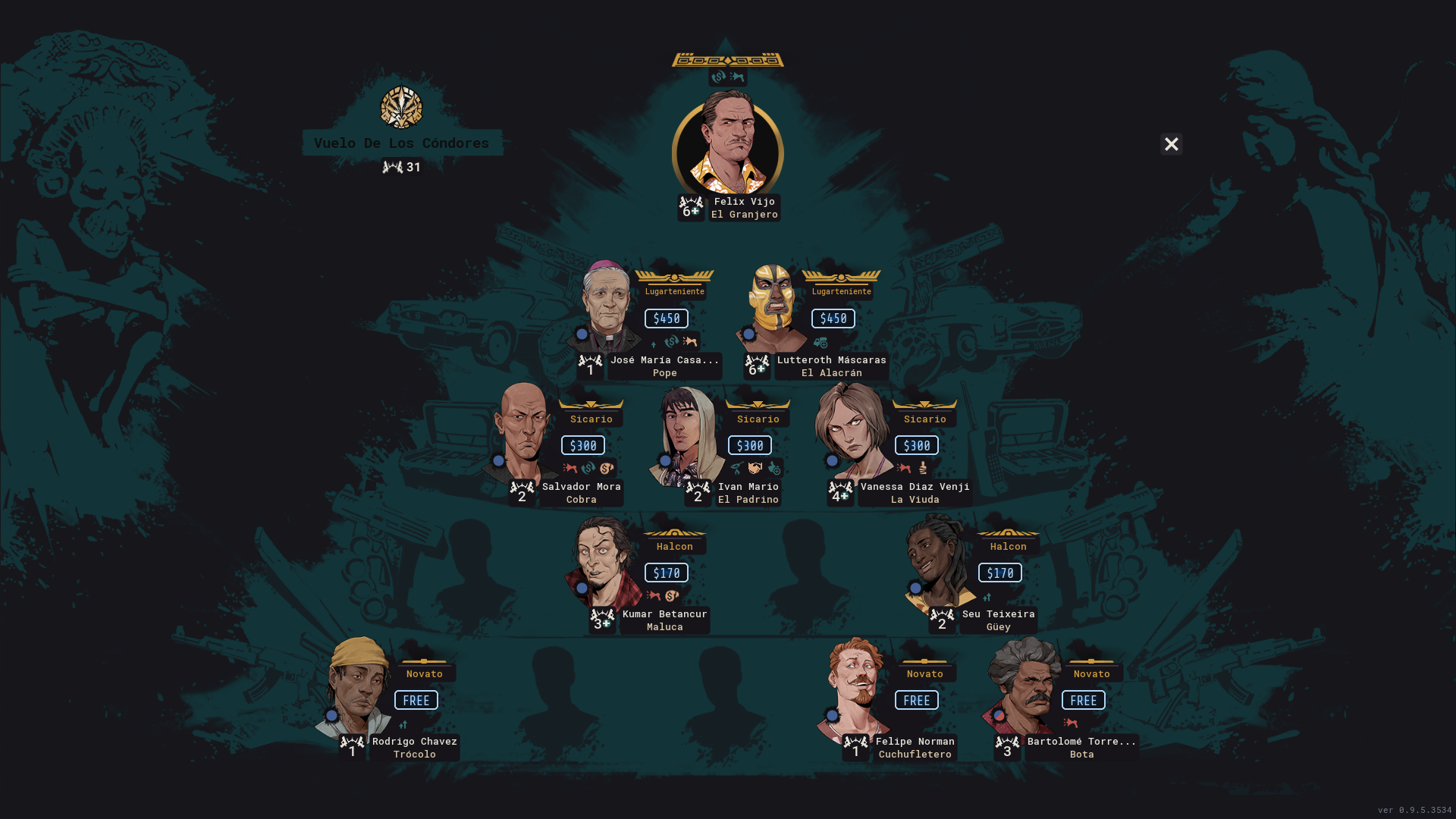 The system around loyalty among your lieutenants could also use some help, as the most powerful ones also crave high terror. This is counterintuitive to what you are trying to accomplish (or at least my playing style), and you’ll spend a lot of time just ponying up cash or fulfilling quests to keep them happy. If there were some way to make this system work more in the players favor, I think it would be more rewarding to keep lieutenants for longer periods of time and not feel the need to let them go (likely via assassination) just because their blood lust becomes too expensive to deal with. Lastly, the pacing of the story can become difficult as your management brain tries to take over. It paces you through setting up your empire at a rate that I was starting to struggle with, so you’ll have to know when to take some time before completing the next step or just knowing what the next step is. I do appreciate the story and understand the difficulty in ensuring pacing stays optimal to both progression and player management.

Review based on a retail copy of the game provided by the publisher.

...but watch your back (and your budget)

Cartel Tycoon is a solid entry for anyone who’s Steam Library is full of management games. There is a lot to accomplish on each map and making good management decisions feels extremely rewarding. While there is room for improvement, this is a game worth picking up freshly graduated from Early Access.