Ubisoft has been a company for quite some time bringing gamers around the world classic series names such as Assassin’s Creed, Splinter Cell, Far Cry, and much more. Now, they want to bring a new, fresh title to the world. Something that doesn’t seem as big budget or “AAA” as the majority of their titles are. Enter Child of Light.

This new title from Ubisoft brings many features from classic JRPG titles such as Final Fantasy and Grandia II with its amazing battle system. Now, while you won’t be assassinating enemies from rooftops or stalking from the shadows, you will be going into battle with a semi-active, turn-based battle system. You and your party member are placed on a bar alongside up to three enemies and each of you move across this bar until you hit the “cast” zone where you decide what action you are going to take. Each action takes different amounts of time, ranging from instant to “very long” as the game puts it. In the casting zone, you are vulnerable to getting interrupted if someone strikes you and you aren’t defending. Getting interrupted stops whatever action you had previously chosen and pushes you back quite a ways on this bar. This stop-and-go system is not slow by any means and is extremely fun and addicting, just as it was decades ago. 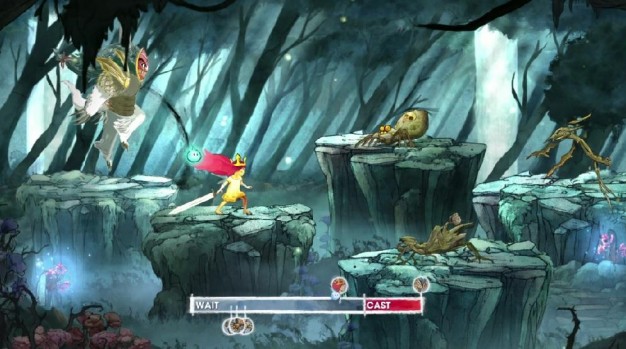 Ubisoft isn’t just ripping off the classic JRPG games that we know and love. They are adding in some beautiful original work. The most noticeable is the art; this game is absolutely beautiful to look at and to explore. No matter how far you progress through this game, you will be in awe of just how much detail has been put into this world. The soundtrack by Coeur de Pirate is excellent and keeps you feeling immersed in this world, especially during the boss battles.

As for the story, well… You are Aurora, a Austrain princess from the late 19th century who, after having a near death experience, awakens to find herself inside a dream world known as Lemuria. As you play, you start to discover just how much of the world is dream and how much of it is real. You aren’t alone on this journey though; you will find many partners to travel with on your journey and assist you in combat. But not all your partners are fighters, especially a blue orb that follows you around to brighten up the place. He can slow or stun your enemies and heal you throughout the game. 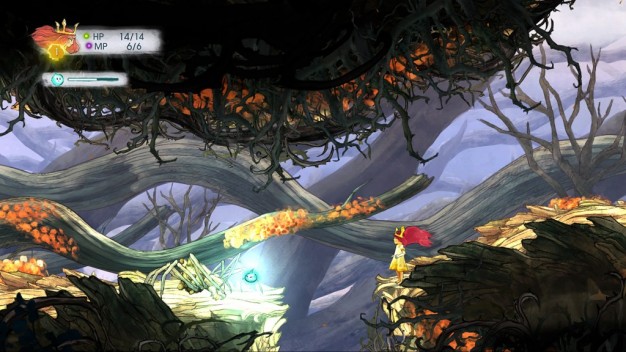 Though its art style is gorgeous, its music immersive and its combat addicting, Child of Light isn’t without it’s flaws. All the dialogue is almost forced with rhyme that will make you roll your eyes if you aren’t playing with a young child by your side. Alongside that, the level progression in leaves something to be desired. As you travel and battle across Lemuria, you will come across gems that can assist you both offensively and defensively. These gems can be forged to make better gems that have improved and/or mixed results. While you can level up through combat and upgrade skills with points earned, you can’t do much else. There isn’t a loot system, there isn’t equip-able items, just you, your levels, and six gems. Late in the game, this can become moderately annoying as you may have wished you could find more to be interested in with your character’s stats and combat build.

Child of Light does feature co-op in which the second player can control your friendly blue orb and help stun enemies and heal your characters, but outside of that this game is single player in every aspect. The controls are tight and feel well-rounded. That can’t be said for the difficulty though. There isn’t truly a difficulty spike if you play on normal (now being renamed “casual”), so if you want a game where you actually are afraid of dying, be sure to play on hard mode when you start up. 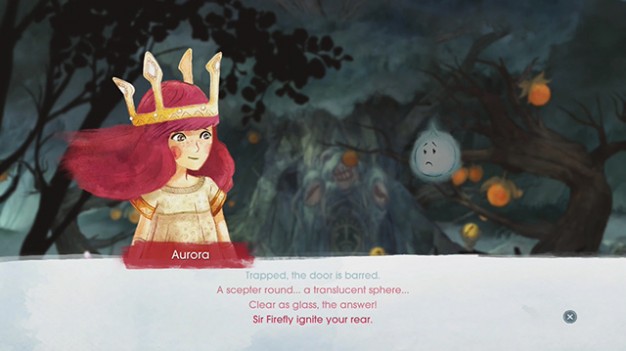 All in all, Child of Light is an exceptional title that I have been looking forward to for some time. It has not disappointed me for the most part, even though the lack of equipment/loot still bothers me to a certain extent. The story and immersiveness of the game will stay with me for quite awhile as this did feel like a truly original title despite coming from a blockbuster company such as Ubisoft. At times, it does feel like Ubisoft was really wanting to try it’s hardest to be “indie”, but it doesn’t mean they did a bad job with it either. For $15, this game is worth the buy if you want a fun RPG to tide you over for about 10-15 hours of gameplay. Just don’t say I didn’t warn you about the rhyme all of the time. 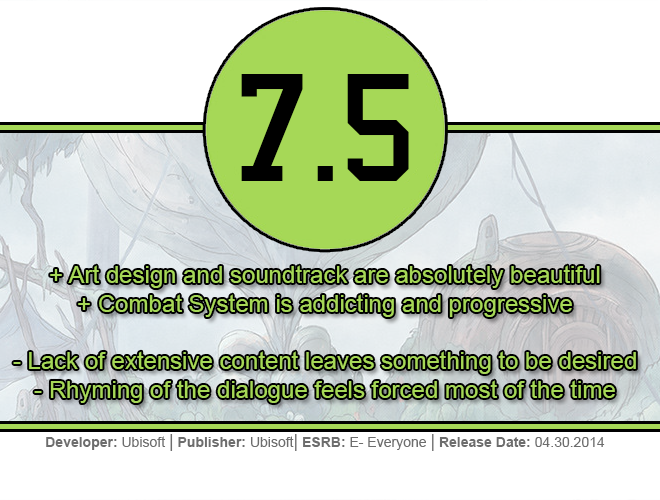