I do like a good puzzle game and this is exactly why Creature in the Well took my fancy. We’ll obviously be going into the game in more depth but in a nutshell it’s brilliant … if you don’t mind a bit of finger cramp. “Cramped fingers!” I hear you say. “Why would we want those?” Well this isn’t just a puzzler it’s a pin-brawler and that involves skill and accuracy and lots of clicking … and therefore, cramp!

So what’s a pin-brawler then? For this to make sense we need to go back a step and tell you a wee bit about Creature in the Well‘s plot. You will be taking the roll of the last Bot-C. You’re basically a caretaker of sorts, or at least you were until something horrible happened and you were disabled.

You wake to find yourself in the desert near the town of Mirage which is surrounded by a permanent sand-storm. The storm is so bad that the inhabitants don’t believe anything else exists outside their home. You get the impression from the off that The Creature is very happy keeping it this way. You’re introduced to this being pretty much immediately but you don’t know a great deal about it other than it’s keeping a close eye on the village and that it doesn’t like intruders in its mountain.

You need to go into the mountain an switch back on all the machinery that’s laying dormant there. You’ll do this by using charged energy balls to hit targets, knock out bumpers and deactivate turrets. All this will grant you the energy needed to open doors and move through the maze of rooms in the complex. Each area of the mountain belongs to a particular sub-system required for the machine to function. Each area also has it’s own puzzles that will need to be solved if you are to progress.

Speaking of puzzles, something I like about the game is that a new zone doesn’t necessarily mean a totally unknown challenge. The difficulty builds by introducing new hazards as you go. So for example … you’ll start with basic bumpers, then turrets are added, then bumpers that fire energy beams and so on. Each new area adds something different and this means that a definite difficulty curve is established. The game gets harder without throwing you anything so new that you don’t know what you’re doing.

Completing puzzle rooms earns you energy. You’ll need this to open doors around the complex and different doors require different amounts of power. Energy is something that should be treated as a currency. You’ll not only need it to re-power the machine but also upgrade your Bot.

Although I wouldn’t call Creature in the Well a metroidvania style game as such it certainly has that feel. Not all of the puzzles need to be solved to allow progression and some are certainly more difficult than others. You get the sense that going back when you’re stronger is sometimes a better idea than just battering away at the same thing and not getting anywhere . You’ll find bot cores as you go and use these to upgrade yourself. Being faster, more accurate and having more life is an absolute bonus when trying to complete the different areas. Some puzzle rooms will open secret passages too which might yield some very useful gear.

The levels don’t need to be completed in any exact order. After the first level you can choose which way round you’d like to complete the zones and they open in steps a bit like a tree. After the first zone you get a choice of two, then five and so on. All levels on each tier need completing before you move on but the choice of order is yours. This is really important in later stages as some zones are definitely harder going than others if you’re ill equipped or skilled. Being able to dart out of one into another is a big help in progression.

Your main antagonist is The Creature and the boss battles you’ll find yourself in are different and fun. You’ll have to remember what you’ve learned in the zone you’ve just completed as you’ll be facing similar puzzles as part of that end arena. You’ll find yourself on an elevator and the battle is in steps. When you complete one set of puzzles the elevator will go up a level and you’ll get a different set to complete. These battles are also a bit unique because on top of the usual mayhem of everything trying to blast you to bits you have the Creature interfering in it’s own insidious ways.

This is a game of skill more than anything and definitely one of multi-tasking. Each puzzle has it’s own hazards and standing in the wrong place can be deadly. I was doing very well on one for instance until an unexpected pair of bumpers popped out of the ground and I was standing in an energy beam … then I wasn’t standing anywhere.

So that’s a bit of an overview of the story and what you’re doing. Now let’s have a bit of a think about nuts and bolts … and a few of my general misgivings. First off I think some form of in-level save would be nice. The game autosaves as you unlock new areas so you can go back to them with ease, which is good but it doesn’t let you save your position. When you die you get unceremoniously grabbed by the creature and dumped back in town. This means trecking back to wherever you were killed from the start of that zone. This doesn’t effect the gameplay or the fun it’s just a bit of a pain in the rear if you’re struggling a being killed a lot. I’m not asking for the ability to save at the drop of a hat but an unlockable save point that you need to find would be handy.

My second gripe is that your aim doesn’t always feel fluid. There are weapons that you’ll find with various abilities that help this immensely but too often you feel that you should be on target and miss what you’re going for by inches. When there are a lot of things that are trying to kill you your accuracy is paramount and I’m not sure it’s always there. This could of course be blamed on lack of player skill but I don’t necessarily believe this is the entire cause of the issue.

Creature in the Well looks great and the story is really well written. You pick up information as you go which adds to overall feel and creates atmosphere. The fact that there really isn’t any narrator and a lot of the plot comes in written scraps that you’ll have to look for adds to an air of mystery which is definitely welcome. Incidentally … you might be wondering why this title is called Creature in the Well and not Creature in the Mountain. When you’re in the town you’ll find a well and you can see the Creature peering out from it’s depths. This is also where you’re dropped when getting booted out of the mountain after you die. There is method to the madness here. 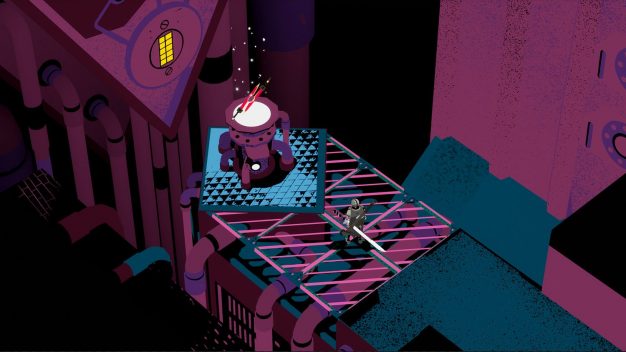 The controls are fine with the exception of the aiming issues I mentioned earlier. You aim with the mouse so this could actually be part of the problem, it only takes the slightest wrong movement and you’re suddenly way off your mark. Other than this everything controls really well so no complaints there.

All in all this is a clever, innovative take on the action genre. The pinball elements are the core of the game, not a throw away idea that’s been implemented as a gimmick. The fact that you won’t solve every puzzle on your first run adds replayability and you know that as you upgrade your Bot some of those puzzles are going to get easier. It’s worth trying to complete everything to unlock all the secrets. With this being said the game could also probably be completed relatively quickly by a skillful player just wanting to follow the main story without all the hidden bits. 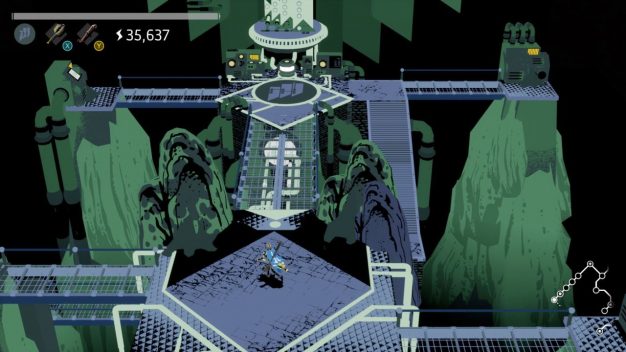 Action fans amongst you looking for a bit of a change should definitely give Creature in the Well a try. It’s a really clever puzzle, pinball, dungeon-crawling hybrid that really needs to be played to be understood properly. I don’t actually feel like I’ve done the game justice here, seeing is definitely believing in this instance.

Worth taking a shot at.

This is definitely a winner for those of you that love action and fancy a bit of a change. Those who, like me, love a good puzzle just as much would be well within your rights to go out and add Creature in the Well to your collection. If the controls were just a touch less twitchy this would be getting a higher score than it is. Very interesting stuff. Whether this is a title for hardcore pinball addicts is a slightly different question. All in all, well worth a go.